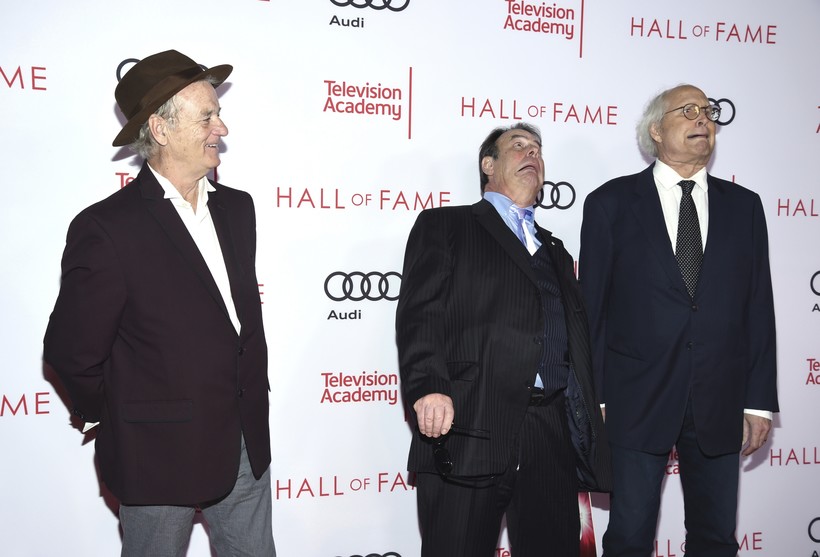 'Wild And Crazy Guys' And A Golden Age Of American Comedy

"I was probably too young for that film," he said in conversation with WPR's "BETA." "I was about 7. I was on vacation with my family in Greece. Even at that age I thought, 'This is a weird film.' This huge budget road trip musical with a car chase and heroes who have sunglasses on, and you're not really sure what they're about — they're criminals but they're eating fried chicken. It's got so much peculiar stuff going on in it, but that's what makes it brilliant."

That comedy brilliance was available in spades during the 1980s. Members of the original cast of "Saturday Night Live" would go on to write and appear in countless legendary Hollywood comedies during the decade.

In his book "Wild And Crazy Guys," de Semlyen writes, "The comedy mavericks of the '80s changed Hollywood forever."

That original SNL cast included Chevy Chase, Dan Aykroyd, Steve Martin, Gilda Radner and John Belushi, among others. Chase left after one season to pursue his film career, and when he returned to the show as guest host during Season 3, it was newcomer Bill Murray who stepped forward on behalf of the cast to confront Chase about his abrupt departure after one season of the show.

The two got in to a heated physical argument moments before the show went on-air, with Murray famously accusing Chase of being "medium-talent," said de Semlyen.

Did Murray and Chase repair their relationship in time to film 1980's "Caddyshack" together?

"Not as such," said de Semlyen. "There was still tension there, but not so much that they wouldn't share a scene together."

De Semlyen thinks comedy in the '70s was very muted and subtle as America grappled with issues like the Vietnam War and Watergate. So this new wave of unpredictable, energetic talent in the late-70s easily took Americans by storm. "They brought this new, kind of anarchic energy to them," he said.

That energy caught Hollywood studios off guard, too.

"I don't think the studio executives generally knew what was going on, and if you read about 'Animal House' ... they had no idea whether it was going to work or not," de Semlyen said.

"If you look at the movies that came out after 'Animal House,' stuff like 'Caddyshack' and 'Stripes,' they're all trying to kind of capture that 'Animal House' magic. You know, a lot of them have that same slobs versus snobs dynamic," said de Semlyen. "John Belushi is just unleashed in that film and he's just so watchable."

De Semlyen thinks things could have been quite different for 1980s comedy if Belushi hadn't died in 1982 at the age of 33.

"For one thing, he would have been in 'Ghostbusters'" he said.

Aykroyd wrote "Ghostbusters" and "Spies Like Us" as follow-ups to "The Blues Brothers" for himself and Belushi. Murray and Chase eventually appeared in those movies, respectively, as a result of Belushi's death.

"I think Belushi would have done some really interesting stuff," said de Semlyen. "He was talking to Robert De Niro and Sergio Leone about doing 'Once Upon A Time In America.' Like a lot of these comedians, he wanted to kind of do some serious stuff as well as the silly stuff, so he might have turned in to a really interesting dramatic actor."

Looking back at a movie like "Ghostbusters," it's hard now to picture it without Murray as Venkman.

"He brings such an essential quality to that film," de Semlyen said. "He has that cynical sideways glance at the whole thing. He's like an audience surrogate, so however silly and big and crazy the film gets, he's there to say, 'C'mon, this is a bit dumb, isn't it?'"

Belushi, Chase and Murray were impulsive and unpredictable, but Martin was meticulous in his craft, de Semlyen said, with fellow comedian Rick Moranis once describing Martin's style as "anti-comedy."

"He was just very cerebral and would really not tell jokes so much as kind of do jokes about jokes," said de Semlyen. "He was bigger than all of them in the mid-70s, he was the one stand-up who could fill arenas while the others were getting started on 'Saturday Night Live.'"

Eddie Murphy was another comedian who could fill arenas, but his path was a bit different. With comedy specials like "Delirious" and "Raw," and films like "Beverly Hills Cop," Murphy was a bona fide "rock star" of comedy.

"Eddie Murphy was the same off stage as he was on it," de Semlyen said. "When he was a kid, he would go around and tell everyone, 'I'm gonna be a movie star. I'm gonna be a millionaire,' and he made it happen."

But, he tried and tried to get on SNL with no luck. When they finally hired him, he wasn't given anything to do at first.

"But he kept at them and eventually he got his break," de Semlyen said.

There were also many talented and very funny women, including Jane Curtin and Radner, who appeared alongside the "Wild And Crazy Guys" on SNL, but they didn't enjoy the same notoriety and big screen success of their male colleagues.

"It was an era sort of known as 'New Macho,' as one of the 'Saturday Night Live' writers called it," de Semlyen said. "I think John Belushi didn't think women were particularly funny, so I think that fed in to it, unfortunately. But yeah, it's a big shame."

So after diving in to the great comedy movies of the '80s, does de Semlyen have an absolute favorite?

"I'll take 'Planes, Trains And Automobiles' because it's just a perfect film, I think," he said. "And it's fascinating that your sympathies change as you watch it. John Candy is playing this super annoying guy who's annoying you as the person watching it, and then you shift and think Steve Martin is kind of an asshole for not treating him better and you're ping-ponging back and forth in between who you're relating to. And then by the end you just love both of them."