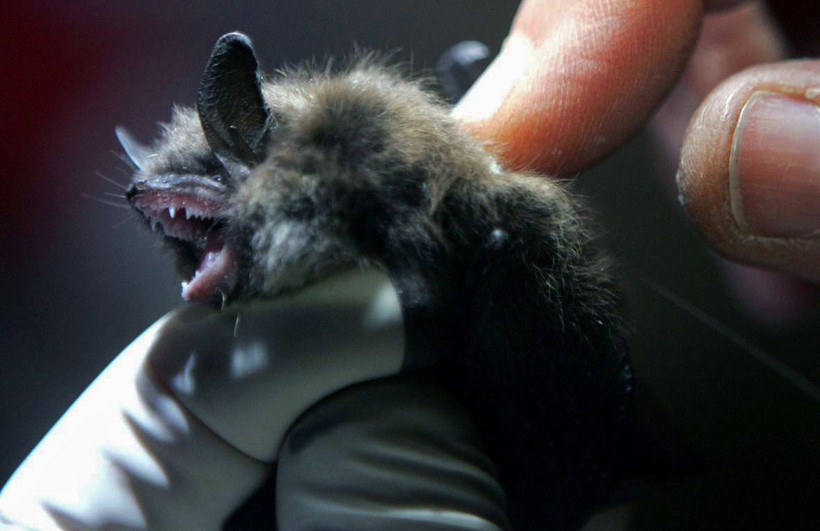 Disease First Discovered In Northeastern US 10 Years Ago
By Chuck Quirmbach
Share:

It's been 10 years since a bat-killing fungus was first discovered in the northeastern United States.

The white fungus and the disease it causes — white-nose syndrome — is now found in 31 states, including Wisconsin. Efforts to find a cure or a treatment are moving ahead. Meanwhile, bat populations continue to decline. 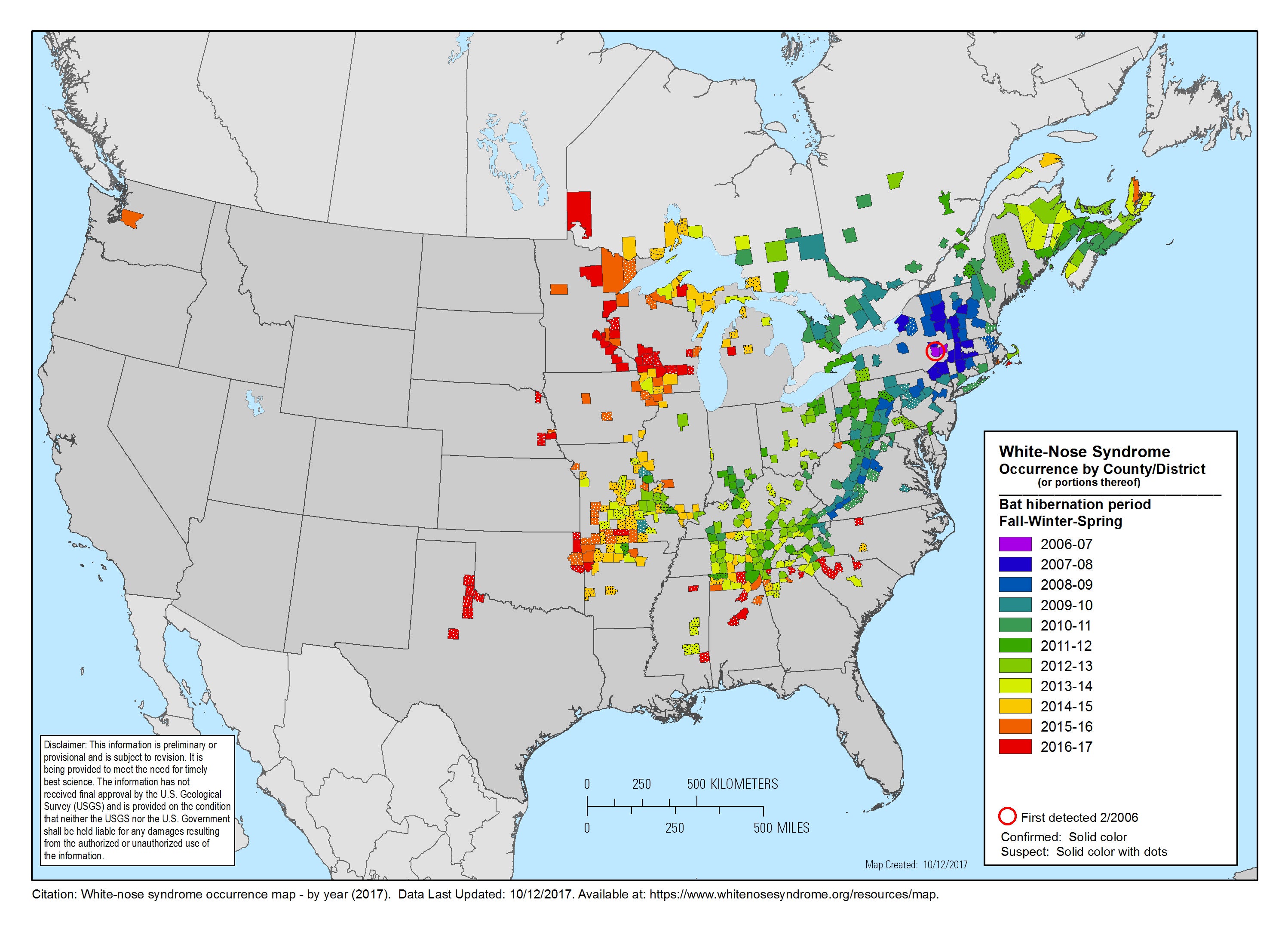 The problem is prevalent at Laurel Caverns, a large cave system about an hour south of Pittsburgh. 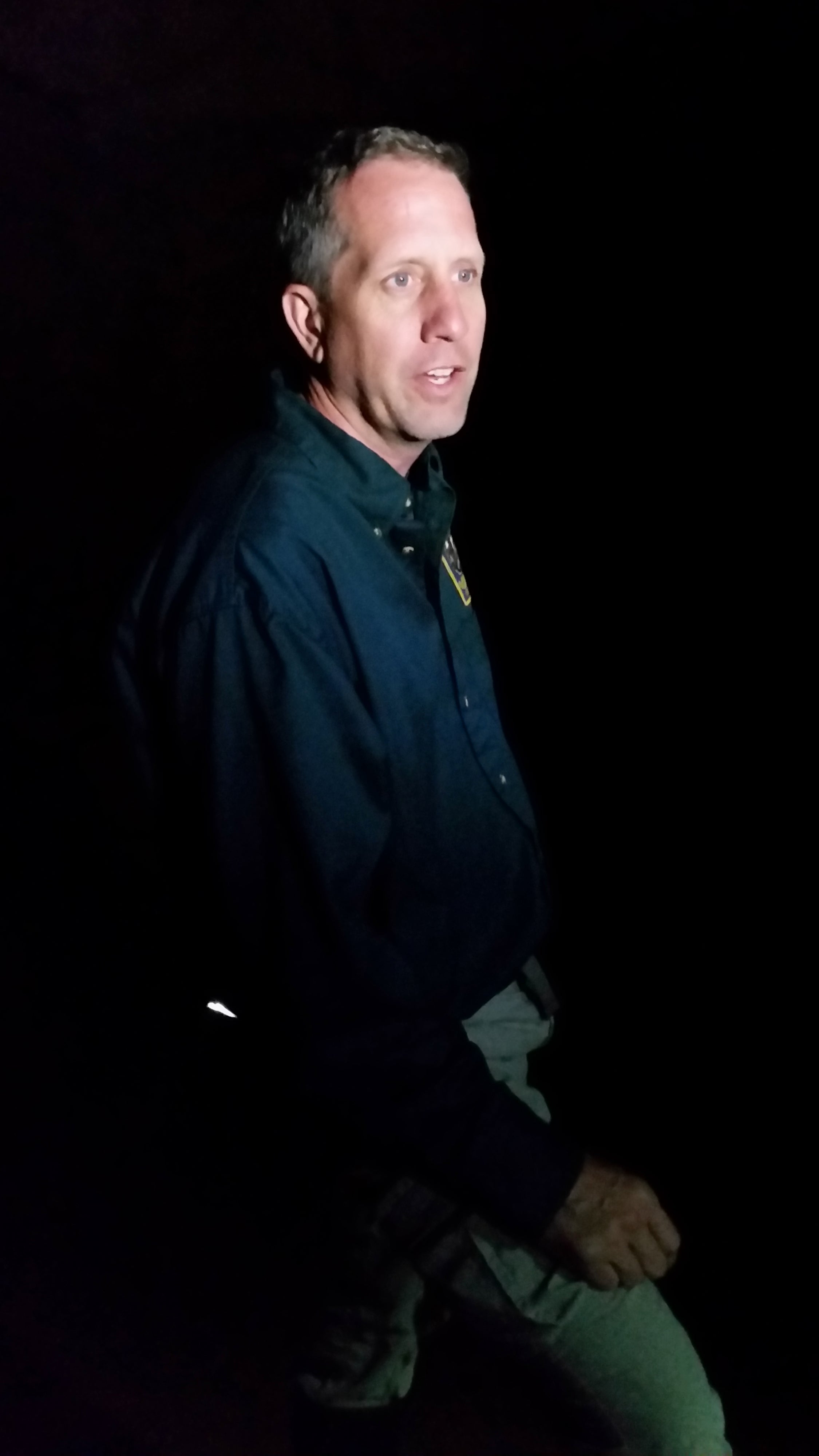 In early October, Greg Turner, a wildlife biologist with the Pennsylvania Game Commission, stood in a wide cave called The Stomach and told members of the Society of Environmental Journalists that before the fungus, Pseudogymnoascus destructans — known as Pd — spread into this cave and others, they were a popular wintertime home for bats.

But then, Turner added, the fungus led to white-nose syndrome developing in many caves in the Northeast, and later the Midwest.

Scientists said they believe that hibernating bats affected by white-nose syndrome wake up to warm temperatures more frequently, which results in them using up fat reserves in cold weather and then starvation before spring comes. (For more information, visit this National Park Service article.)

Millions of bats from several species have starved or frozen to death because of the disease.

It came as a big shock to cave researchers, Turner said.

"That was what I always told the folks (about caves) that were getting recently infected," Turner said. "I said the hardest part is watching all those bats that you used to see and count, and watching that go down to zero, that was the tough part."

Some state agencies have restricted human access to caves to try to reduce the spread of white-nose syndrome, by cave explorers, who are not affected by the fungus.

Commercial cave owners have made changes too, but Laurel Caverns spokeswoman Lisa Hall says it doesn't look like the new procedures have helped.

The U.S. Fish and Wildlife Service is coordinating the national response to the disease by organizing a series of studied dedicated to finding a cure.

Communications officer Catherine Hibbard says the bat situation is bleak, but not without hope of a treatment or cure. While work has begun to control the disease, Hibbard said it's hard to say when their efforts will prove successful.

"They are in the initial stages, so it will take a while and it's also, when you think of a wild population of bats, they are very difficult to treat," Hibbard said.

Hibbard praises Wisconsin scientists for being good partners in the national effort, taking on some of the experiments.

The U.S. Forest Service announced Tuesday that one of its Madison-based researchers is getting a $156,000 grant to explore the use of ultraviolet light to try to help a species called the little brown bat.

Daniel Lindner, a plant pathologist with the U.S. Forest Service, says a lab study has found that a low dose of a type of ultraviolet light, called UVC, may kill the Pd fungus.

"The UV light actually affects the DNA that's in the cells, and damages it. The DNA is absolutely critical for cells to live and do everything they do. So, if the DNA gets damaged enough, the cells die," Lindner said.

Lindner says this winter, he and scientists from the Wisconsin Department of Natural Resources will go to a cave in northwestern Wisconsin, collect 45 fungus-infected little brown bats, and drive them to Bucknell University in Pennsylvania, where the bats will be exposed to UVC light.

If the test kills the fungus, and later monitoring shows the bats aren't harmed, Lindner said it's possible scientists may eventually install ultraviolet light "rings" at cave entrances to treat bats in flight.

According to the Fish and Wildlife Service, a Trump administration budget proposal could eventually cut funding for white-nose syndrome in half. Recently, bat supporters are reaching out to members of Congress to urge continued support for research. It's part of the annual "Bat Week" activities, coordinated by Bat Conservation International.