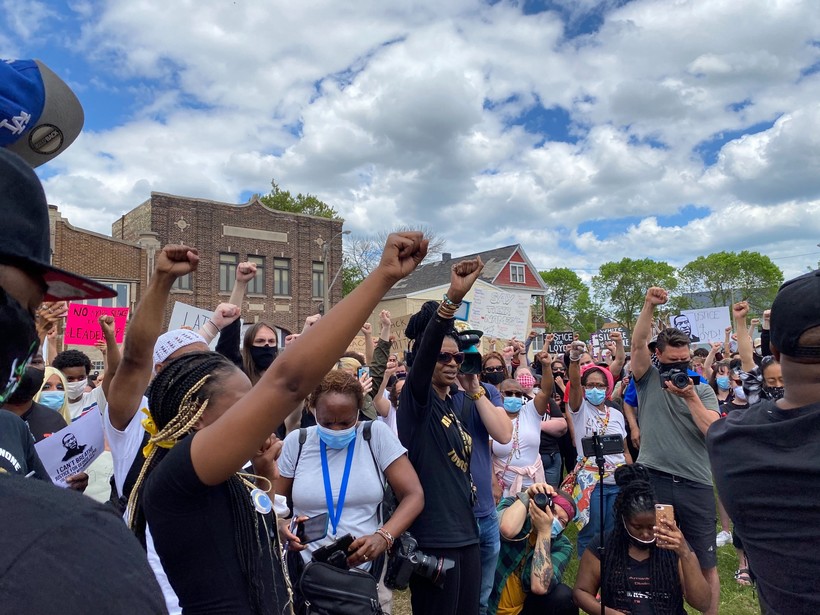 White House Hints At Federal Response To Protests In Milwaukee

President Donald Trump’s administration says it will roll out a plan to ensure communities like Milwaukee are safe amid continued anti-racism protests. The news comes after reports of federal agents, who were not wearing insignia, ventured beyond federal properties to detain protesters without offering cause.

"And you'll see something rolled out this week as we start to go in and make sure that the communities, whether it's Chicago or Portland or Milwaukee or someplace across the heartland of the country, we need to make sure that our communities are safe," said Meadows.

Meadows was critical of unrest in U.S. cities, particularly Portland, over the weekend saying, "it’s just not acceptable when you look at communities not being safe and not upholding the rule of law."

The Milwaukee Police Department said in a statement it "did not request federal assistance as it relates to patrolling protests and is unaware of any federal agents coming to Milwaukee regarding. MPD will continue to protect and serve the members our community as they exercise their rights to assemble and freedom of speech."

Milwaukee Mayor Tom Barrett released a statement saying that "with few exceptions, protests in Milwaukee have been peaceful."

"It is preposterous to suggest Milwaukee needs federal agents to quell unrest or manage peaceful protests," said Barrett. "Their presence at this time could be counterproductive."

WPR reached out to the Department of Homeland Security, Customs and Border Patrol, Gov. Tony Evers and the Milwaukee Police Association for reactions to Meadow’s mention of Wisconsin’s largest city. None of the individuals or organizations responded to interview requests.

Larry Dupuis is the legal director of the American Civil Liberties Union of Wisconsin. He said his office has not heard about plans for similar federal police presence in Milwaukee. But he said to take Meadows' mention of Milwaukee seriously, citing reports that 150 DHS agents could deploy in Chicago without a clear scope of duty.

"The behavior of the federal agents in Portland is the main reason for concern," said Dupuis. "I mean, they have been apparently roving far from federal facilities where they were supposedly sent to provide some protection ... and picking up people off the street and detaining them, without telling them why they're being detained, for no apparent reason in some cases."

Dupuis said reports from Portland suggest federal officers are going in with "a very confrontational approach" in spite of resistance from local authorities.

On July 17, Oregon Attorney General Ellen Rosenblum announced she would file a lawsuit in federal court against DHS alleging their agents engaged in unlawful conduct and violating civil rights of Oregonians. Rosenblum cited an incident on July 12 of a peaceful protester who was "severely injured" after being struck in the head with an "impact weapon" fired by federal agents. She said another instance happened on July 16 when an unmarked minivan with federal agents wearing unmarked military uniforms forcibly detained a citizen walking on a sidewalk.

Dupuis called the reports out of Portland deeply concerning and said the detention, in particular, "looks like illegal behavior."

"And, you know, the kind of disappearing of people that, you know, is more likely to happen in a banana republic than what you would think of happening in the United States," Dupuis said.

On Sunday, the Department of Homeland Security issued a press release defending its actions titled Backgrounder: Day 50 of Continued Violence in Portland. It describes violent assaults on federal officers on Saturday night and early Sunday morning as a "siege." The release also referred to "violent anarchists" 10 times, when describing tactics used by the crowd against officers that night. DHS said federal officers were barricaded inside a federal courthouse, had laser pointers and "commercial grade" fireworks shot at them, and that officers’ lodging information was published.

Marquette Law School Assistant Professor Ed Fallone, who ran for Wisconsin Supreme Court in 2013, said using federal officers to protect federal property is not unusual but reports of federal agents detaining people in areas away from federal buildings is.

"This is not the sort of precedent we want to set in our country," said Fallone. "Outside of matters of federal jurisdiction such as anti-terrorism efforts, for example, law enforcement within our borders has always been a local state concern. And it's absolutely unusual and troubling to see the Trump administration view these federal agents as some sort of ad hoc police force that they can send wherever they want around the country."