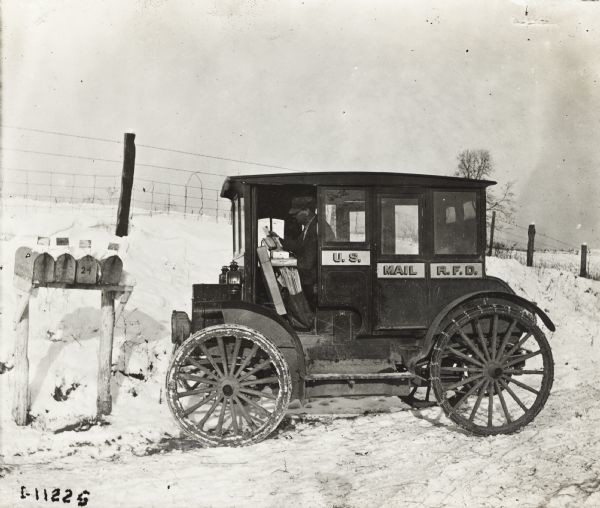 This mail truck was equipped with tire chains to drive through snow. Wisconsin Historical Images

When The Mail Came To Rural Wisconsin

It's easy to take mail delivery for granted, but the convenience of home mail service didn't begin until the mid-19th century. Prior to that mail was delivered to a local post office. Even as home delivery became commonplace, rural families had to wait until the 20th century to get mail delivered directly to their door.

While rural communities lagged behind, Wisconsin became one of the first places to experiment with free rural delivery in 1896 in Sun Prairie.

The U.S. Postal Service was born before the United States. The Second Continental Congress ordered the formation of a mail system to connect the colonies in 1775 and named Benjamin Franklin the first Postmaster General. Franklin had experience on the job. He’d been postmaster in Philadelphia but lost his job due to his revolutionary activities on behalf of the fledgling United States.

Franklin laid the foundation for today’s postal service. He introduced regular routes from Florida to Maine as well as overseas. By the middle of the 19th century, post offices were established in every state, often in stores, barber shops and even people’s houses. Home delivery didn’t begin until 1863 and only then in larger cities.

But most of the nation’s people didn’t live in cities. Rural families had to travel into town to receive and send mail — a major inconvenience for families. Still, not everyone thought delivery was a good idea. Business owners feared the loss of business if farmers didn’t come to town for mail. Many also objected to the cost of paying for mail carriers

In 1895, Congress appropriated money for an experimental rural delivery service. One of the first routes was in Wisconsin.

Each carrier covered a 60-square-mile area and earned $25 a month. They traveled in wagons over dirt roads that were often impassable in snowy winters and muddy springs. Each carrier had to buy his or her — a few women did become mail carriers — own wagons and horses. Many rural postal carriers still provide their own vehicle today. Some of the carriers traveled by bike when they could. The days were often long. The Wisconsin State Journal reported, "sometimes the carrier gets back by one o’clock; but often his work keeps him until 6 p.m."

Rural mail delivery also helped with isolation. Many carriers brought news, stock prices and weather forecasts along with letters, parcels and magazines. With daily delivery, some families subscribed to daily newspapers for the first time as well.

In 1899, the Wisconsin State Journal declared that rural delivery was here to stay: "Rural free delivery is now in successful operation in every State and territory in the Union."