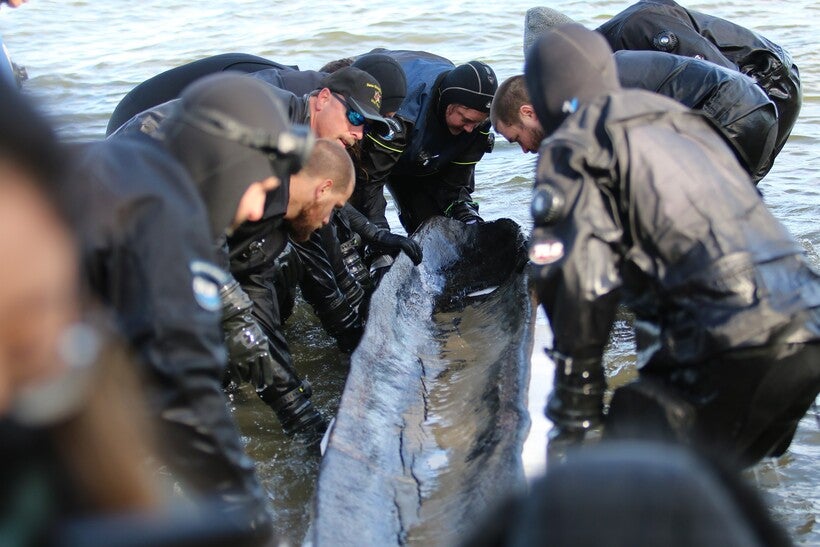 Historians say it is the oldest intact canoe in Wisconsin
By Diane Bezucha
Share:

It was Tamara Thomsen’s first day off in a while. So the diving instructor and maritime archeologist chose to spend the day in one of her favorite places: underwater.

It was a sunny afternoon in June, so visibility in Lake Mendota was good. Thomsen and a friend were following some fish along a wall about 27 feet below the surface when Thomsen spotted something that looked like a carved log sticking out of the sand. Thomsen wanted to get a closer look, but her friend was running low on oxygen and they had to turn around.

But curiosity got the better of her and later that day Thomsen returned with a fresh tank of oxygen and a camera.

She brushed away just enough sand to confirm what she had suspected — the log was actually an old dugout canoe.

Thomsen snapped a few photos and shared them with her colleagues at the Wisconsin Historical Society. Based on the boat’s good condition, they thought it might be a Boy Scout project from the 1950s.

But what interested Wisconsin State Archaeologist Jim Skibo were the stones pictured in the canoe. The flat, palm-sized stones had notches in them like old net sinkers used by anglers, suggesting the canoe could be even older.

So in August they sent in a sample of the wood for carbon dating and the results stunned them. The wood dated back to 800 A.D. Thomsen had found a 1,200-year-old canoe.

"It's pretty amazing," Thomsen told WPR’s "Central Time." "We've never found a ship from this era, and not in Lake Mendota, and not this deep."

Skibo said it’s more common to find durable artifacts like pottery or chipped stone from tools. They rarely find textiles and wood that are this old. And when they do, Skibo said they're rarely intact.

"That's what makes this a unique artifact," said Skibo.

The reason the canoe survived this long, Skibo said, is because it was buried. But now that the canoe was exposed, it would deteriorate quickly. Getting it out of the water was essential.

After notifying the state’s Native American tribes, Skibo’s team started putting together a plan to get the canoe out before winter. 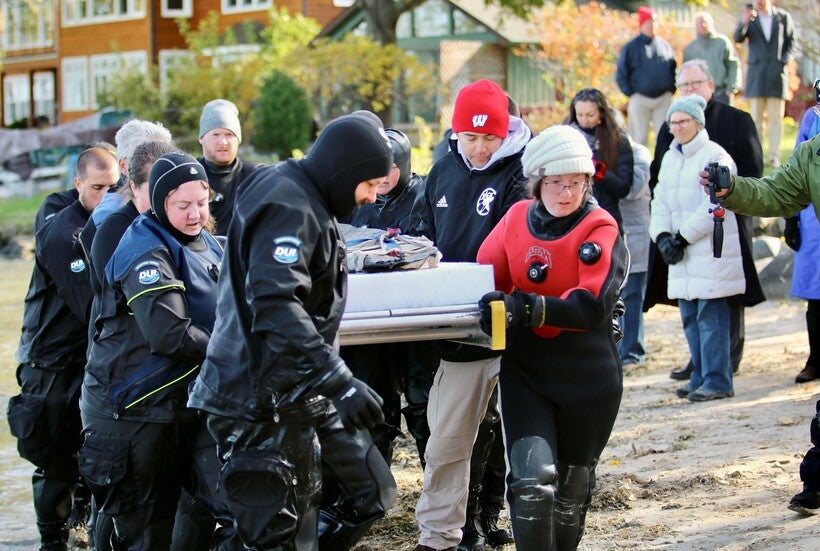 A 1,200-year-old canoe found in Lake Mendota is carried on a gurney for support after being recovered. Photo courtesy of the Wisconsin Historical Society

The team had never retrieved a large artifact from that deep underwater, so Skibo said they were really making it up as they went. For a month and a half his team worked seven days a week.

Skibo and Thomsen said their mantra became, "What’s canoe with you?"

By Nov. 2, after three days of excavating and dredging, the 15-foot canoe was ready to be exhumed.

Thomsen and a crew of divers were joined by the Dane County Sheriff's office to make the risky trip to the bottom of Lake Mendota. The algae growth was so thick by that point that divers only had about 6 inches of visibility and couldn’t even see the person next to them.

They carefully slid a gurney under the canoe and used float bags to slowly raise it to the surface. From there, it was floated for a half-mile toward shore where Skibo and others were waiting in neck-deep water to help carry it ashore.

The whole process took about four hours and during that time a small crowd had gathered on Shorewood Hills Beach, including Madison Mayor Satya Rhodes-Conway. They cheered as the canoe made its way across the beach and into a padded trailer.

"I've never done anything like this in such a public way," said Skibo. "Everyone there could feel it was an emotional experience. And people even started crying and clapping. It was really something to witness."

Skibo said it’s easy to get jaded when you’ve worked as an archaeologist for decades and are used to making your discoveries alone in a lab. But this canoe feels different.

Skibo said 37 dugout canoes have been found in Wisconsin, but this is the oldest intact canoe ever discovered in the state.

According to Skibo, in the fall, Native Americans would sink their canoes close to shore in shallow water to preserve them until spring when they would be dried out and used again.

"But this one has a different story," said Skibo.

This canoe was found 100 yards offshore in nearly 30 feet of water, with a set of net sinkers which are more commonly found near the Great Lakes.

"To understand that they were using these nets in our local lakes, here in the Madison area is pretty significant," said Thomsen.

Skibo said the canoe likely belonged to ancestors of the Ho-Chunk, potentially the Effigy Moundbuilders. 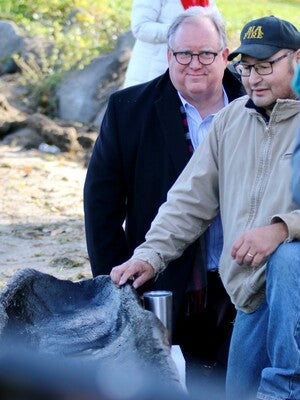 Ryan Greendeer, a spokesperson for the Ho-Chunk Nation said they were excited to hear about the canoe. Their Tribal Historic Preservation Officer, Bill Quackenbush, attended the exhumation at Shorewood Hills Beach.

Greendeer said discoveries like this can be challenging when municipal, county and state governments are all involved. Agencies are not always required to notify tribes when they find artifacts that may be connected to Native culture.

The exceptions are human remains, funerary artifacts, sacred objects and objects of cultural patrimony. According to the Native American Graves Repatriation Act of 1990, these items are supposed to be repatriated to tribal nations. More everyday objects, like a canoe, can fall into a gray area of ownership.

But Greendeer said the Ho-Chunk Nation doesn’t put quite the same value on material objects. He likened it to finding an old Thunderbird in a junkyard — it’s cool to find, but you don’t have to restore it to pristine condition to know it existed.

And Greendeer said sometimes the attention that comes with ancient artifacts is unwanted.

"You don't want all these archaeologists to descend upon the area now searching for all these artifacts, poking and prodding," said Greendeer.

Still, he said the Ho-Chunk Nation sees the canoe as an educational opportunity for Native and non-Native people alike. Quackenbush is already planning a workshop that would bring Ho-Chunk youth to Lake Mendota and teach them to make dugout canoes like their ancestors.

This particular canoe was carved out of a single log that was likely cut down and hued out with stone tools. Skibo said builders would light a fire on top of the log to char the wood and make it easier to chip away. The burn marks can still be seen, even after 1,200 years underwater, Skibo said.

"They did a remarkable job and it took hundreds of hours to make and it would have been a prized possession. Maybe you'd only make one or two in your lifetime. And so when it went down, I'm sure it was a disappointment," said Skibo. 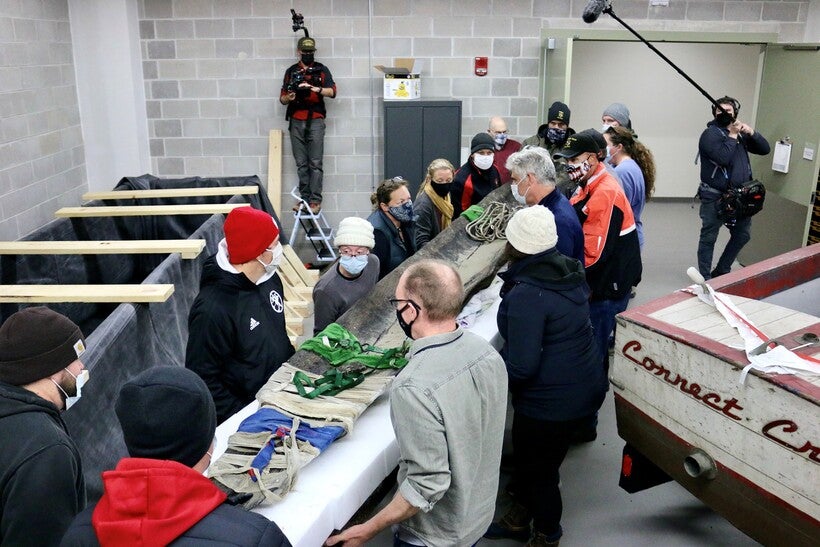 A 1,200-year-old canoe found in and recovered from Lake Mendota is transferred into a preservation vat. Photo courtesy of the Wisconsin Historical Society

The canoe is now at the State Archive Preservation Facility, where it will undergo years of preservation work. To ensure it doesn't dry out and crack, Skibo’s team constructed a custom tank filled with tap water and bio deterrent to prevent bacteria growth.

Slowly they'll add polyethylene glycol to the water to fill the wood’s waterlogged cells. Then it will be freeze-dried and ready for research or put on display in a museum.

Skibo said the whole process should take about three years, which would coincide with the opening of the new Wisconsin History Museum on the Capitol Square in 2026.

"Hopefully the canoe will play a role here," said Skibo. "It's a great artifact for telling multiple stories."