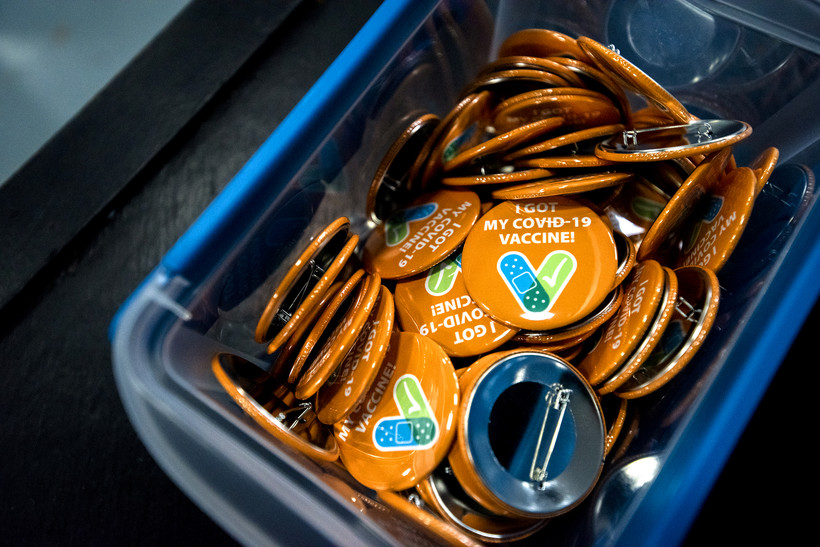 Buttons for people who receive the COVID-19 vaccine are on display Tuesday, May 4, 2021, at St. Francis High School in St. Francis, Wis. Angela Major/WPR

What Does The Law Actually Say About Vaccine Mandates?

Legislatures in some states, including Wisconsin, are seeking legal protections for people who aren't vaccinated in the form of anti-discrimination laws.

But those against such measures say that choosing not to get a vaccine is a personal choice and shouldn't be a protected status in the same way as race, gender and religion.

James Hodge, a professor of law at the Sandra Day O'Connor College of Law and director of the Center for Public Health Law and Policy at Arizona State University, says legislatures ultimately have to make that call, though the decision is clear to him: those who are unvaccinated should not be made a protected class.

"You're only going to have preventable deaths and morbidity related to it," he said in an interview with Rob Ferrett on WPR's "Central Time." "It's a horrendous outcome, and it's totally due to that level of protection for persons who just don't want to have to take the vaccine."

As Republicans push for such protections for the unvaccinated, Hodge clears up what the law says regarding vaccine mandates.

Rob Ferrett: From a legal standpoint, do we have a lot of precedent for these kinds of vaccination restrictions and laws restricting them?

James Hodge: We've got dozens of years of precedent. There's a lot of cases and a lot of litigation around vaccination policies leading up to COVID-19 and will continue to be throughout the remainder of the pandemic.

And what those actually go on to say is that we can and will, under circumstances, require vaccination among specific persons and set specific limits on who can do what based on whether they're vaccinated.

RF: It seems like a lot of the questions now center around whether institutions can set their own vaccination requirements. What does case law tell us about whether they can do that?

JH: There are specific entities that can set vaccination mandates in the U.S. that will have strong legal support for doing so.

An example is a hospital, in relation to what and how they may actually have to require or at least expect their employees to be vaccinated prior to being engaged with patients. Federal standards all but require that to provide a safe workplace.

Now, contrast that with a retail enterprise that might set a vaccine mandate just to make sure that their employees and customers don't potentially spread COVID-19 within that specific setting. It's a little different environment, as is a cruise ship, as is an airplane, as is a train.

That's why we have different mandates and different requirements around vaccines that start to look very dissimilar. But there are different risks in each of those environments. And the vaccine policies that have been built up over time reflect those key differences.

JH: Well, this is such an important point. Let's make a critical distinction.

Can government forcibly require you to get vaccinated in the U.S.?

The reality is, legally, no, you can't be forced to take a vaccine. You're not going to be physically restrained and given a vaccine by any legitimate public health authority in the U.S. at the federal, state, tribal and local levels.

But that's not the same as a vaccine mandate.

A vaccine mandate means we're setting a condition on you returning to society or participating in a particular activity. And that condition is you're vaccinated.

So you want to return to work. You want to go to the University of Wisconsin-Madison. You want to attend your school (if you're eligible for a vaccine). States are setting vaccine mandates and private employers are doing the same because they can, legally. That's very distinct from a compelled vaccine.

Now, how far can we go with that? Very far. The U.S. Supreme Court has even affirmed that we can set vaccine mandates at the state or local level. So right now, we have Supreme Court precedents allowing that to occur.

RF: Say I'm a business owner in a state where the state government bans discrimination based on vaccine status. But I think that vaccines are necessary to protect people's health. If I challenge that in court, how likely is it that I'm going to be successful?

JH: The claim is, I'm an employer trying to operate a safe workplace for myself, for my employees, for my customers. And I can't in some ways discriminate against persons who are unvaccinated. We've got state laws that say that right now.

But your ability to set other requirements may be part of what we're anticipating.

Maybe you can't keep unvaccinated people out of your business, but maybe you can require them to wear masks by requiring everybody to wear masks. You can create social distancing in your restaurant. It's somewhat returning to some of those same norms we saw in the harshest parts of the pandemic.

We expect we'll see litigation around what and how far employers go. It's about to come to courthouses near you.

RF: Sometimes vaccination requirements will allow for religious exemption. Can you talk about that?

JH: Right now, most states would recognize some religious exemptions to a lot of different vaccines. Not every state, though — big ones like California and New York don't any longer because of measles outbreaks there.

But here's what's neat about those specific exceptions: They're not grounded in U.S. Supreme Court approval. The U.S. Supreme Court has never affirmatively said you have a First Amendment free exercise right to reject or accept vaccine mandates from a constitutional perspective.

The Supreme Court may be poised to change that. We think there may be a case before the court in the near future where the court has to actually issue a statement, and it may say you now have a recognized First Amendment free exercise interest to religiously object to specific vaccine mandates.

Now, that will get interesting very fast, because it would really make it difficult to implement a wider swath of vaccine mandates across the board.

RF: HIPAA, which stands for the Health Insurance Portability and Accountability Act, includes some privacy measures about when your health data is shared. When I walk into a store and someone asks if I'm vaccinated, is that violating my rights?

JH: Everybody thinks it feels like one. And they think the HIPAA privacy rule, which we're all referring to here, certainly would stop that, it doesn't remotely stop that, and it doesn't protect you under that circumstance.

The privacy rule is about what a hospital has to do to protect your privacy — not what a store clerk has to do or what your neighbor can't ask you or what you can't disclose on Facebook or otherwise.

So, yeah, people can ask you about it. You just don't have to respond if you don't want to.

A Look At The Republican Push To Protect Unvaccinated People 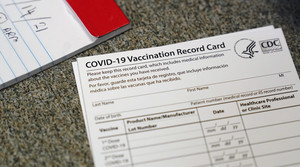 As the national effort to vaccinate people against COVID-19 slows down, Republican lawmakers across the country are moving to protect the unvaccinated. We look at the "anti-discrimination" measures that are being considered and how far mandates, including so-called vaccine passports, can legally go.