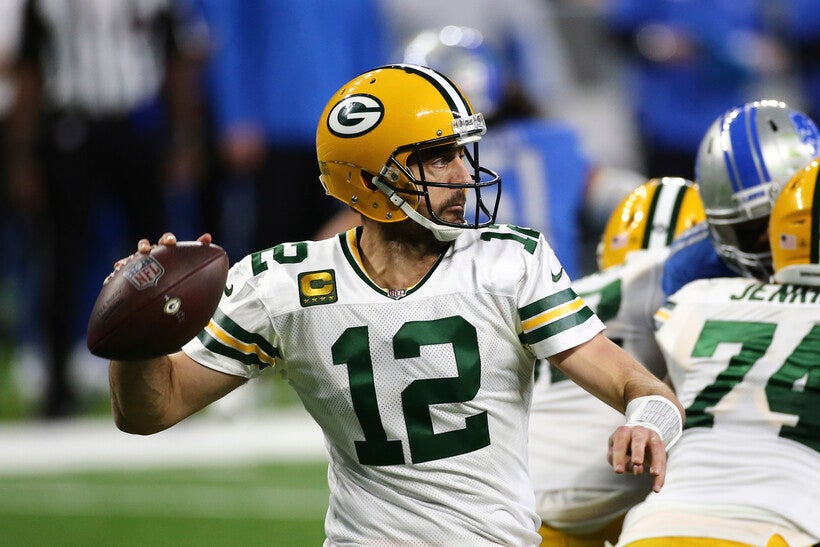 There's Still No Telling Whether Aaron Rodgers Will Be A Packer Next Season
By Megan Hart
Share:

Aaron Rodgers wasn’t at the first day of mandatory minicamp for the Green Bay Packers Tuesday. His decision isn’t a surprise for those who’ve been following the offseason rift between the quarterback and his longtime team.

Head coach Matt LaFleur declined to say whether Rodgers received an excused absence, calling the matter "team business." Rodgers is subject to nearly $100,000 in fines if he misses all three days of camp without approval from the organization.

LaFleur wouldn’t discuss any recent conversations he’s had with Rodgers but indicated that he’s still hopeful that the relationship between the quarterback and the organization can be saved.

"I’m naturally optimistic," he said. "We’ll take it day by day and just do whatever we can to help remedy the situation."

Should Rodgers return to Green Bay, LaFleur isn’t worried about his fitness level, he said.

"He’s a pro’s pro. I know he knows how to take care of his body and get himself ready to play, so that is not much of a concern for us at all," he said.

Of course, it’s also possible that Rodgers won’t be back, either due to a trade or his retirement.

Reports emerged that Rodgers didn’t want to return to Green Bay just before the start of the 2021 NFL Draft. The reigning NFL MVP later implied that he didn’t feel valued by the Packers, while speaking to ESPN’s SportsCenter.

It appears the problems started more than a year ago when the Packers traded up to draft quarterback Jordan Love with their first draft pick — a signal that management was thinking about a future without Rodgers, who’s 37. General Manager Brian Gutekunst acknowledged that Rodgers wasn’t consulted or informed of the decision in advance.

With Rodgers absent, Love took most of the reps at minicamp Tuesday. LaFleur expects that to continue over the next couple of days, he said.

"He’s a young quarterback that was not afforded a preseason last year (due to the COVID-19 pandemic)," he said. "I just think every rep that he takes is so valuable, and he can learn something from both the good and the bad."

The Packers also signed a couple of quarterbacks this offseason, including veteran Blake Bortles. Bortles didn’t take many snaps Tuesday, but he brings a lot to the team, LaFleur said.

"I think just from the standpoint of being a great teammate, being a great resource in that quarterback room, I couldn’t be happier. I think he’s done a great job," he said.

Several players missed the first day of minicamp due to COVID-19 protocols, according to Packers Wire. Star wide receiver Davante Adams was there but didn’t fully participate. He’s not dealing with an injury, he said. Rather his limited action was intended to allow other receivers to get some reps, he said.

Adams has no expectations when it comes to whether he’ll be catching passes from Rodgers next season, he said.

"Obviously, I’m praying that he comes back. We all want him back. I think everybody in this building has the same mindset," he said.

Adams and several other Packers wide receivers missed optional team activities this offseason. Adams — who’s backed Rodgers this offseason — said he didn’t appeal to any of his teammates to skip the workouts in a unified show of support for their quarterback. Rather he wanted to spend the time with his young daughter.

Tackle David Bakhtiari acknowledged his close relationship with Rodgers but didn’t want to inject himself in the situation, he said.

"I think as time goes on, it’s going to sort itself out, and we all will find out," he said.

Tuesday marked the first time he spoke to the media since his season-ending ACL injury last season. The experience of rehabbing has taught him not to take things for granted, he said, but he declined to give a timetable for his return.