The Newest Packer: What To Know About Jordan Love

In Surprise Move, Green Bay Traded Up To Draft QB Out Of Utah State
By Megan Hart
Share:

Sports fans finally had something to watch Thursday with the start of the 2020 NFL Draft.

So far things look a bit different this year. Due to the new coronavirus, the event is being conducted remotely for the first time ever. Another unusual aspect of Thursday’s festivities: The Green Bay Packers used a first-round pick to select an offensive skill player for the first time since 2005.

It was quarterback Aaron Rodgers they took 15 years ago with the No. 24 pick. This time Green Bay traded a fourth-round selection to move up four spots and secure Rodgers’ possible successor, quarterback Jordan Love from Utah State University.

The draft continues Friday, with the second and third rounds beginning at 6 p.m. In the meantime, here’s some background on the newest Packer.

As a Utah State Aggie, Love showed he has a strong arm and the ability to evade defenders. Packers General Manager Brian Gutekunst said Thursday he was impressed by Love’s athleticism, size and natural throwing ability.

Love threw 17 interceptions last season, more than any other player in college football. Heading into the draft, scouts couldn’t seem to agree whether he’s worth the risk. Some analysts felt he has the talent of a Top 10 pick, while others projected him to go in the second round.

How Does Love Feel About Heading To Green Bay?

Due to the coronavirus pandemic, Love met recently with the Packers’ coaching staff over Zoom, he said. The call went well, and he thinks it’s a big part of the reason he’ll be heading north, Love told Packers.com.

He’s excited for the opportunity to learn under Rodgers, Love said.

"His freakish arm talent, ability to make throws, I’ve been watching him for a long time," Love said.

Originally from Bakersfield, California, he’s been to Wisconsin just once. The Wisconsin Badgers hosted the Aggies when Love was a freshman. Love didn’t play in that game, he said. 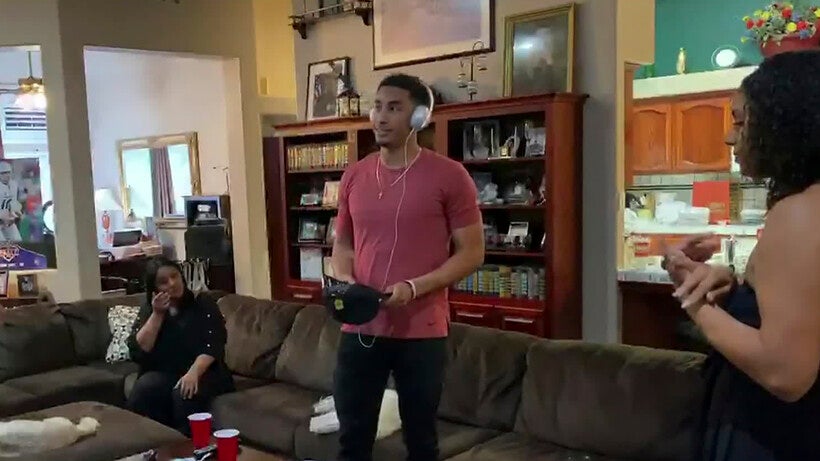 In this still image from video provided by the NFL, Jordan Love listens on his headphones during the NFL football draft Thursday, April 23, 2020, in Bakersfield, Calif. Love was drafted by the Green Bay Packers during the first round. NFL via AP

When the Packers drafted Rodgers, Hall-of-Fame quarterback Brett Favre was 35. Rodgers is now 36.

Rodgers spent three seasons learning from Favre before taking the reins. It seems Gutekunst is hoping a similar situation will play out between Rodgers and Love, though he said Thursday it's too early to put that kind of pressure on Love.

Quarterback is the most important position in football, Gutekunst said. While few expected the Packers to draft one in the first round, it was an opportunity he couldn’t pass up, Gutekunst added.

"We think he has a really good future in this league," Gutekunst said. "He’s coming from a place where he’s done some really good things, but he has a lot to learn too, and I think we’re a very good fit for his development."

How Does Rodgers Feel About This?

After trading up for Love, Gutekunst told reporters Thursday he hadn’t spoken to Rodgers.

"He’s obviously been through this, and he’s a pro," Gutekunst said.

Rodgers is focused on cementing his legacy in Green Bay, Gutekunst told reporters earlier this week. After nearly leading the Packers to the Super Bowl last season, it seems likely Rodgers was hoping the team would bring in some offensive weapons to help him take it all the way.

In fact, he recently told the "Pat McAfee Show" he thought it would be "cool" if Green Bay used its first-round pick on an offensive skill player. Love likely isn’t who he had in mind.

It’s no secret the Packers could use another wide receiver or two, after relying heavily on Davante Adams the last couple seasons.

This draft class is stacked when it comes to receivers, though the top prospects are now accounted for. Still, it seems likely the Packers will select a wideout before the draft ends Saturday.

What Are Green Bay’s Other Remaining Needs?

In addition to wide receiver, the Packers could use help at several other positions.

Blake Martinez and B.J. Goodson both departed Green Bay as free agents, so the Packers are also likely to go looking for some assistance at linebacker. Wisconsin’s Zack Baun is still on the board, but he’ll probably be chosen before Green Bay makes the 62nd overall pick.

The Packers could also look to make up for the free agency loss of Bryan Bulaga on the offensive line.