Troy Brewer, a line cook at the Milwaukee Bucks' Fiserv Forum who has been out of work since mid-March, said he's been anxious in recent weeks.

Brewer, like hundreds of thousands of other Wisconsinites whose means of providing for themselves and their families have been upended by the COVID-19 pandemic, has been relying on unemployment benefits to keep his family of four afloat.

But on Monday, Brewer received his first unemployment payment without an additional $600 in weekly benefits, an added level of support passed by Congress and approved by President Donald Trump as part of the CARES Act on March 27 to help workers like Brewer. Those additional benefits officially ended July 31 without congressional action to extend them.

For Brewer, it meant going from around $850 in weekly benefits to a little more than $250.

Congress continues to debate the next round of stimulus spending, and both Democrats and Republicans have discussed plans that would include some level of unemployment supplement. President Trump Thursday threatened to bypass Congress and take executive action extending the unemployment benefit supplement.

But as the fight drags on in the nation's capital, many out-of-work Wisconsinites are left to figure out how to cover basic expenses in an economy that does not resemble anything close to normal. And in the absence of federal action, some agencies in Wisconsin that provide services to those in need are bracing for an increase in demand.

'My Head Is Spinning'

At the beginning of March, Brewer was working three cooking jobs: one at Fiserv, one at the Brewers' Miller Park and another at a Mexican restaurant in Milwaukee. By the end of March, he had been let go from all of them.

"Pretty rough to go from three jobs to none and to be unemployed for the first time in over 30 years," he said.

Brewer also serves as a union steward at the Milwaukee Area Service and Hospitality Workers Organization, known as MASH.

For Brewer, his attention has shifted to figuring out how to cover his family's basic expenses.

"My main focus is keeping a roof over my kid's head and maybe the lights and gas on," he said.

Finding money to cover costs is something that Anthony Steward, Brewer's coworker at Fiserv, is concerned about too. Steward, once a cook for luxury suites at the arena and also a union steward with MASH, said he's been relying on unemployment since he found himself out of work in March as well.

Steward, who has two sons, said when he initially received the extra $600 in unemployment benefits, he was relieved, thinking "I get to keep my refrigerator full ... keep my kids together, buy my house needs, pay my rent, you know, my light bills."

But on Monday Steward's benefits dropped from about $950 a week to about $350.

To make ends meet, Brewer plans to apply for FoodShare, a government program that helps those in need cover the cost of food. He said without that program, he wouldn't be able to feed his children.

Patti Habeck, president and CEO of Feeding America Eastern Wisconsin and board president of Feeding Wisconsin, a network of food banks and pantries across the state, said she expects stories of food instability to become more common in the coming days and weeks.

"We are seeing the numbers already creeping up pretty quickly," Habeck said, pointing to increased demand on food pantries across Wisconsin. She added that at some mobile distributions they've participated in, they have seen the lines of cars "getting longer and longer already." 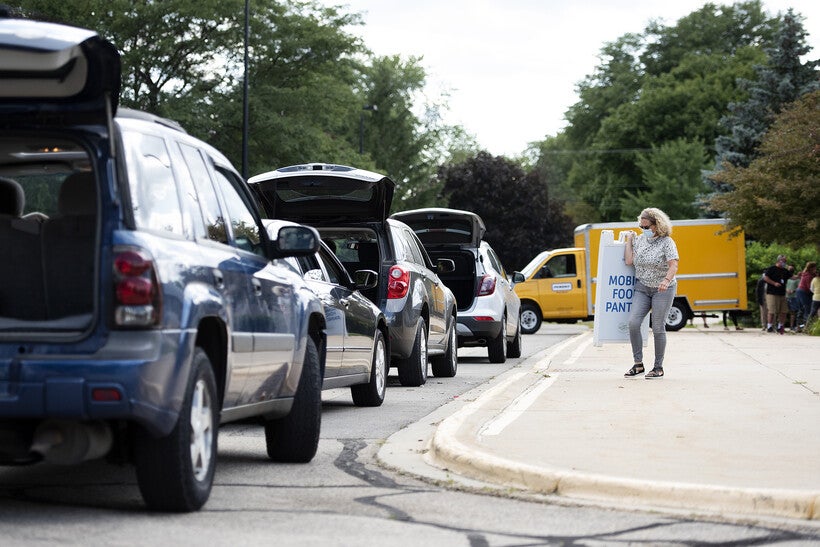 A volunteer carries a sign for the food pantry as a line of cars wait to receive food Tuesday, Aug 4, 2020, at Westside Elementary School in Sun Prairie. Angela Major/WPR

Habeck said that the longer it takes for Congress to reach an agreement on a second stimulus package, the more concerned she is that families will be forced to rely on services like food pantries.

"We're worried about things like homelessness and being able to pay rent and utilities as we start getting into the cooler months and health care ... for obvious reasons," Habeck said. "All of these different areas affect a household, and the longer that it takes to get more supports ... the more we get concerned that the pressure on the charitable sector is going to become even more exaggerated."

'A Rough Road Ahead'

Brad Paul, executive director of the Wisconsin Community Action Program Association (WISCAP), said that with the loss of the added $600 in unemployment benefits, he expects to see an increase in the number of Wisconsinites who aren't able to cover their housing costs.

WISCAP partners with the state Department of Administration to administer the Wisconsin Rental Assistance Program, which uses federal money to give up to $3,000 in rental assistance to qualified Wisconsin renters who've been financially impacted by the coronavirus outbreak.

Paul said that Wisconsin already had a housing affordability crisis before COVID-19, meaning an expected rise in the level of housing instability now adds to an already high level of need in the state.

"You layer on top of that all the people who, in a lot of cases for the first time, are being forced into seeking some kind of public assistance because they can't make due with their income, and ... we're looking at a rough road ahead when it comes to affordable and low-income housing in the state," Paul said.

Paul said the demand for the state's rental assistance program has been "intense," noting that they estimate somewhere between 35,000 and 40,000 requests for rental assistance have been made through the program since it began in early June. He added that more than 25,000 of those requests have come from renters in Milwaukee.

"I think people are a little surprised," Paul said. "I think we knew there would be a heavy demand, and that's why the governor's office made the decision to fund such a program, but I'm not sure everyone anticipated quite this kind of intensity in demand."

Meanwhile, Brewer said when he looks around he doesn't see many work opportunities for food service workers. He said even if he decided to change fields he doesn't think he would find much.

Brewer said he doesn't expect to get called back to work at Fiserv for the rest of the year as the NBA continues its season in Florida. So when he thinks about his family's financial picture, he sounds wary.

"I can see myself going another two, three months and then having to ..." he said, trailing off, before adding: "I'm anxious, I'm nervous, but I'm always optimistic and hopeful for the better."