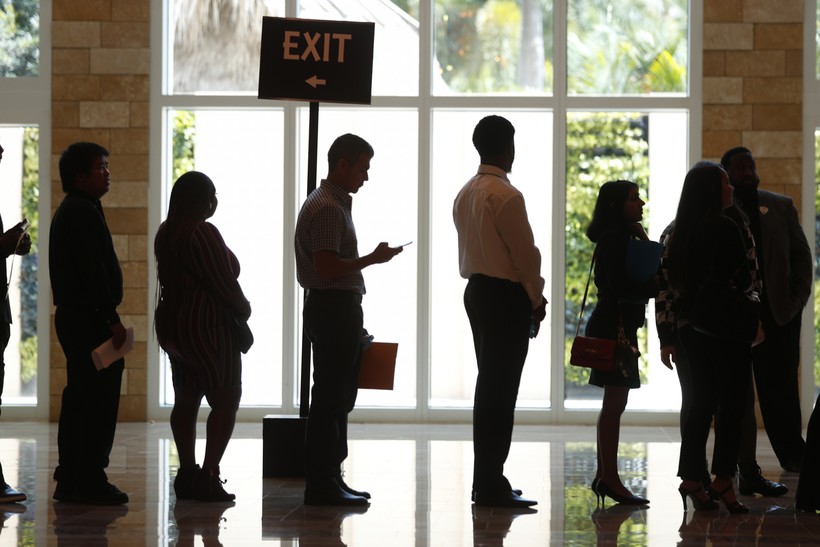 In this June 4, 2019, photo, job applicants line up at the Seminole Hard Rock Hotel & Casino Hollywood during a job fair in Hollywood, Fla. Wilfredo Lee/AP Photo

Economists Warn Of Devastating Effects As Hundreds Of Thousands In Wisconsin Face Prospect Of Less Aid
By Rachael Vasquez
Share:

A federal program that provides unemployed workers with an extra $600 a week in unemployment benefits has expired Friday, leaving many unemployed workers in Wisconsin and across the country without additional government aid to help offset the financial toll of the COVID-19 pandemic.

Steve Deller, a professor in the department of agriculture and applied economics at the University of Wisconsin-Madison, said loss of benefits could be "another body blow" to the state's economy.

"We're going to see a number of renters, for example, that are going to fall behind on rent. We're going to see probably an increase in credit card debt," warned Deller. "I think it's going to have an immediate short-term impact, but I think it could have a longer kind of snowball effect down the road."

This is consistent with many other states, which calculate weekly unemployment benefits with a week that ends on Saturday. Because the official deadline for the program came on a Friday, before a full unemployment week was complete, DWD was unable to pay out the additional benefits for the week ending on August 1.

Deller said the extent of the impact on an individual unemployed worker will depend on how much money that worker is receiving in unemployment benefits without from the additional $600 in aid.

"For those...that were making kind of a middle-wage income, it's going to be a shock to them but it could not necessarily be devastating," he said. "For the lower income workers that were not making a lot of money to begin with, kind of the working poor, this could be a real hit to them."

Adriana Kugler, a professor at the McCourt School of Public Policy at Georgetown University and former chief economist at the U.S. Department of Labor under President Barack Obama, said that added unemployment benefits stimulate the entire economy, benefiting many other people along the way.

Congress continues to debate whether to extend the added $600 in unemployment benefits, or to decrease the extra payments to $200 a week. As of Thursday night, those talks remained at an impasse, according to reporting from Politico.

Some Republicans and business leaders have argued that continuing to give workers $600 in additional unemployment benefits creates a disincentive for workers to reenter the workforce.

Marc Levine, founding director of the Center for Economic Development at the University of Wisconsin-Milwaukee, pushed back on that idea, stressing that Wisconsin remains in the middle of a public health crisis.

"I think one of the issues is, to what extent to do we want all workers entering the workforce, in particular, workplace settings that may or may not be healthy when we're trying to get a pandemic under control," Levine said. "You can't really separate the economic issue from the public health issue," Levine said.

Both he and Kugler also pushed back against the idea that workers receiving unemployment are opting to stay on unemployment rather than going back to their jobs, noting recent research from Yale University that found no evidence the added unemployment benefits had such effects.

According to DWD, more than 160,000 people in Wisconsin received the additional unemployment benefits during the week that ended July 25. Since the start of the pandemic, more than 450,000 Wisconsinites have received the aid.