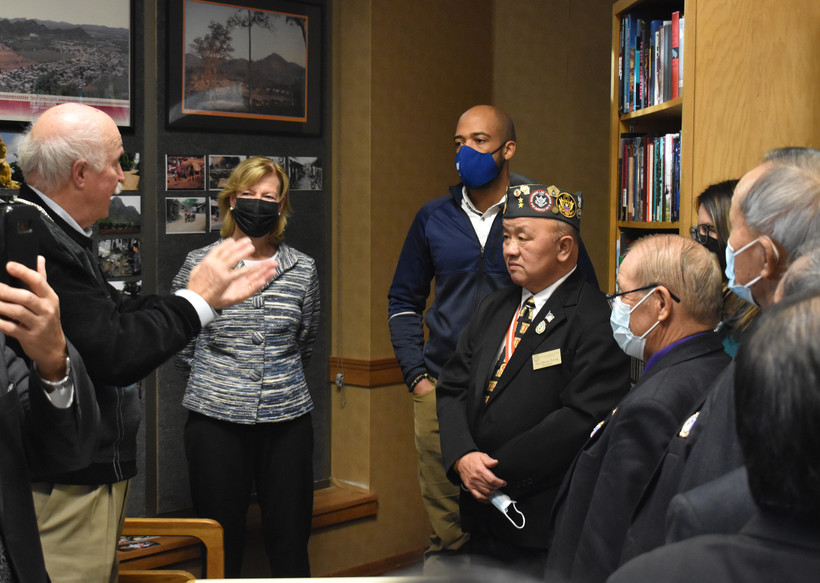 Jim Harris, left, gestures while speaking about his collection of artifacts to (from left to right) Sen. Tammy Baldwin, Lt. Gov. Mandela Barnes and Nao Shoua Xiong, president of the Wisconsin Lao Veterans of America, at the opening of Wausau's "From Laos to America" museum, Nov. 20, 2021. Rob Mentzer/WPR

The museum has a new home, and its owners hope it will help educate people about the Hmong journey
By Rob Mentzer
Share:

A unique collection of Hmong artifacts from Laos has a new home in Wausau. It's the product of decades of collection and dozens of trips abroad, and its owner hopes the display will help educate people about the journey taken by many Hmong people.

Jim Harris is a former principal of Weston Elementary School. After a wave of Hmong refugees settled in the Wausau area in the 1990s, the school had nearly 150 Hmong American students, and he formed bonds with many of the families. With his wife, Marty, he traveled to Laos with the idea that he would try to track down missing relatives of students at his school.

"Parents gave me hand-drawn maps and written directions, and I went to Laos and tramped around mountain villages looking for their relatives," Harris said.

He collected artifacts on that first trip in 2000, and he also learned about a problem that threatened Hmong villagers: unexploded ordnance left over from the U.S.'s "Secret War" in Laos. Jim and Marty Harris would go on to found the nonprofit We Help War Victims, which works to remove dangerous bombs that still kill Laotian Hmong people even decades after the war's end.

The Hmong fought alongside U.S. Armed Forces, first in the Secret War and then in the Vietnam War. Because of their alliance with the U.S., they were targeted by the Communist government of Laos after the war. The first Hmong refugees came to the U.S. in 1975, with subsequent settlements through the early 2000s.

In 2003, Harris took early retirement to devote more time to We Help War Victims, and after that he traveled to Laos nearly every year. Harris said 2021 was "the first year in 15 years that I'm not sleeping in a tent on the Ho Chi Minh Trail," referring to the Vietnam War supply route that is the site of much of the unexploded ordnance. 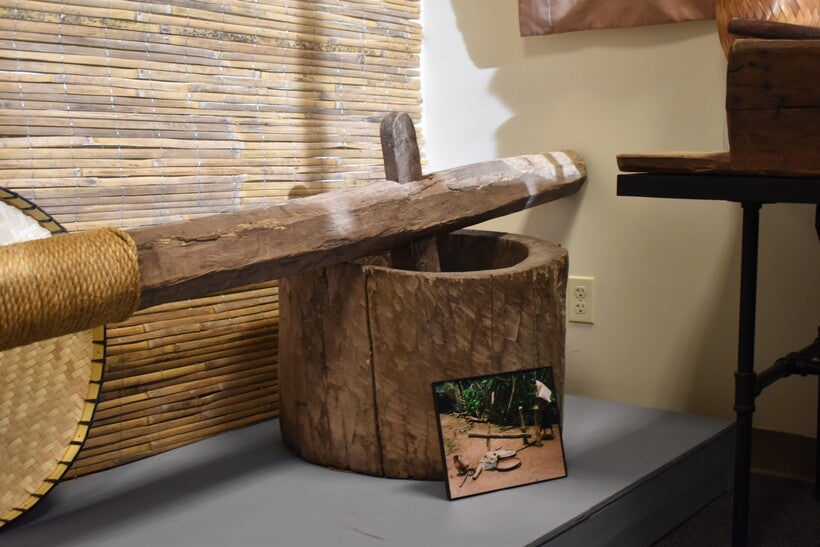 A traditional rice milling machine is displayed at the "From Laos to America" museum in Wausau, Wis. Rob Mentzer/WPR

At the new museum space in Wausau for Harris' "From Laos to America," there are displays of traditional Hmong dress, agricultural tools and massive Hmong story cloths.

And many of the artifacts are unique. The collection includes a traditional rice milling machine that may be the only authentic piece of its kind in the U.S.

"The stuff I collected 20 years ago has now disappeared," Harris said. "It was hand-crafted from forest products 20 years ago. Now it's made of plastic, imported from China, sold in the market." 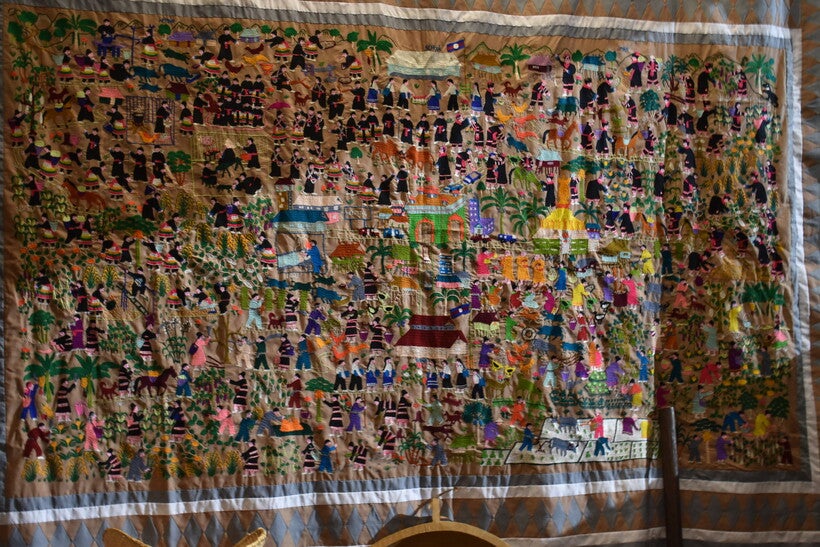 A Hmong story cloth hangs in the "From Laos to America" museum in Wausau, Wis. Rob Mentzer/WPR

Operations for the museum will be run by Wausau's Hmong American Center, though Harris retains ownership of the collection.

"We have heard from other organizations from California, from the Twin Cities, from Milwaukee, who have expressed interest in taking ownership of (the collection)," said Yee Leng Xiong, director of the Hmong American Center. "But Jim and Marty Harris wanted to stay in central Wisconsin, because it started here."

Harris said he hopes the partnership with the Hmong American Center allows more people to see the collection, and he hopes the museum becomes a sustainable enterprise. Its location in central Wisconsin means it could be the site of educational field trips for schools from around the state.

Xiong said that's what the Hmong American Center hopes to foster, as well. The museum, he said, is "another way we can educate and help the community learn a little bit about the Southeast Asian refugees' experience."