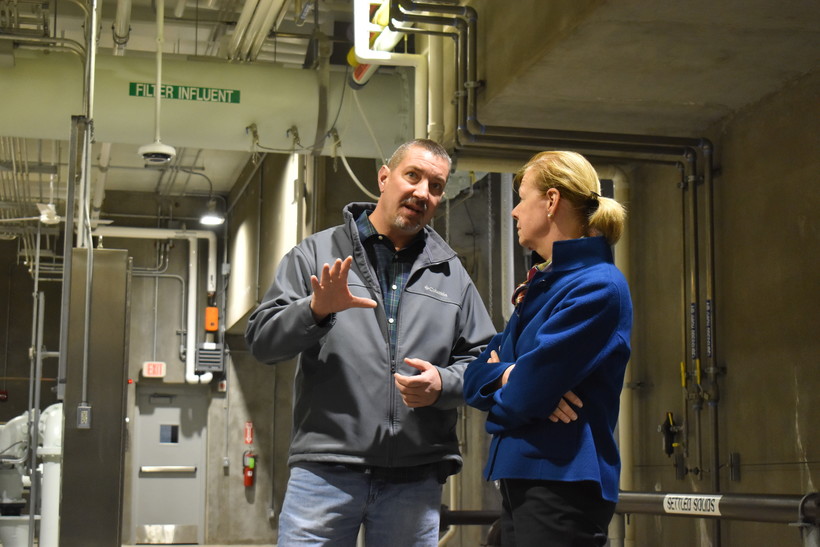 City is first in Wisconsin to treat all its municipal water supply for 'forever chemicals'
By Rob Mentzer
Share:

A new water treatment plant in Wausau is successfully removing PFAS from the city's supply of drinking water.

The plant, which came online in late December, replaced the city's more than 60-year-old treatment facility. It uses a filtration system that pulls the "forever chemicals" out of the water. At a press event Friday, city leaders and U.S. Sen. Tammy Baldwin toured the new facility, which is the first of its kind in Wisconsin.

Nearly a year has passed since Wausau announced it had found elevated PFAS levels in all six city wells. The city provided filtering water pitchers to residents and health officials advised residents to avoid drinking unfiltered water in the meantime.

Wausau is one of dozens of communities around Wisconsin to detect PFAS in its water. But the problem in the central Wisconsin city of 40,000 was unusually widespread, as all city wells were found with PFAS levels in excess of federally recommended levels. The discovery came as the city had already launched plans for a new water treatment plant, and officials worked to revise designs for the new plant to include PFAS filtration.

The current filtration system is a temporary solution, said Wausau Mayor Katie Rosenberg. Resin filtration will cost about $800,000 per year to maintain; the city plans to replace it with a permanent granular activated carbon filtration system within the next two years.

But that, too, comes at a significant cost. Rosenberg said the city faces a deficit of around $15 million on the project, even after receiving $1.6 million in federal funding through an earmark secured by Baldwin in a December spending package. The mayor is asking Gov. Tony Evers and lawmakers to include funding for local PFAS removal in this year's state budget.

"It would be great if they start having those conversations about how to support communities to ensure that our shared constituents aren't shouldering the brunt of this on their own through rates or through taxes," Rosenberg said.

In Wausau, some residents have also objected to significant increases in water rates that are funding the new systems.

But in some respects, the new municipal system makes Wausau a statewide leader as the first city in the state to treat all its water for the chemicals. Other communities have shut down contaminated wells or offered affected residents filtration systems. Wausau's response came as a result of the unusually widespread nature of its contamination.

In northeast Wisconsin, where contamination stemming from a firefighter training facility has contaminated water in the town of Peshtigo and potentially even in Green Bay, some homeowners have turned to deep wells as a solution to the contamination, as water found deeper underground may not yet have absorbed the chemicals.

The health risks associated with PFAS come from long-term exposure, the result of the chemicals accumulating in the body, rather than representing an immediate health risk. But long-term PFAS exposure has been linked to an increased risk of some cancers, including prostate and testicular cancer. It can also cause increased cholesterol levels and reduced fertility in women.

There are thousands of different PFAS chemicals, found in household items including stain protectors and nonstick cookware, and in larger quantities in firefighting foam.

In February, Wisconsin's Natural Resources Board argued about a proposal from the Department of Natural Resources that would have made drinking water standards stricter on PFAS, ultimately passing a standard that was three-and-a-half-times higher than DNR scientists recommended. The DNR had recommended a standard of 20 parts per trillion; the NRB passed one at 70 ppt. Then in June, the federal Environmental Protection Agency released new guidance on four different PFAS chemicals, two of which were at least a thousand times lower than the recommendations set in 2016. In December, the NRB voted to have the DNR restart its process for creating new PFAS regulations.

Wisconsin is far from the only state responding to new information about PFAS contamination and associated health risks. As of this month, the state of Maine has banned the sale of some products containing PFAS in the state and required manufacturers to disclose their use of the chemicals.

The EPA has announced it will release national drinking water standards for PFAS in March.

Are deep wells a solution to PFAS-contaminated water? Some northeast Wisconsin residents hope so.

Tyco Fire Products is offering to drill deep wells for residents in the town of Peshtigo after PFAS contaminated private wells. For some residents, it feels like the answer to a problem they've unknowingly faced for decades. But some are skeptical and prefer alternatives to obtain safe drinking water.