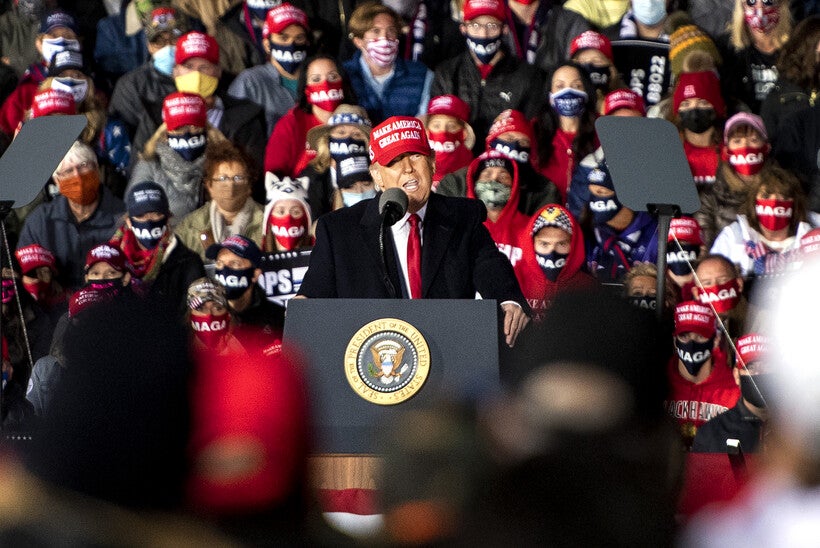 Trump in Janesville: 'We Win Wisconsin, We Win The Whole Ballgame'

At a Janesville campaign rally on Saturday, President Donald Trump said Wisconsin is the key to the presidential election.

The president's speech to thousands of supporters gathered on an airport tarmac was his sixth campaign visit to Wisconsin in 2020. It comes two weeks after he canceled planned rallies in Janesville and Green Bay when he contracted COVID-19 and was subsequently hospitalized.

It also comes as Wisconsin is experiencing its worst and deadliest phase of the pandemic. Attendees of the political rally were required to undergo a temperature check before the event, but face masks were not required and it appeared that most people at the event did not wear them. 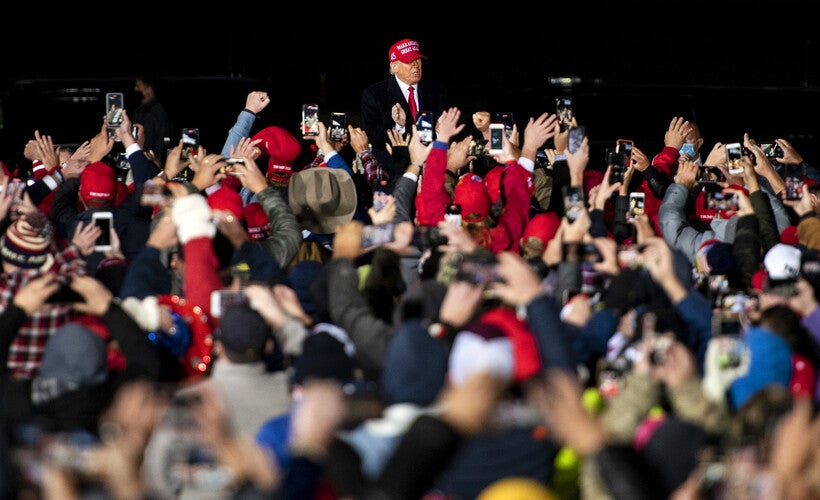 There are no restrictions on gatherings or businesses in Wisconsin as Gov. Tony Evers' most recent order is facing a lawsuit, but as Trump opened his remarks, he referred to lifting pandemic restrictions.

Many of the state's largest school districts are conducting school virtually as a pandemic precaution. Some that started in person have moved to virtual classes in response to Wisconsin’s soaring infection rates.

Trump characterized his opponents as "the party of socialists and left-wing radicals" and sought to blame Democratic opponent Joe Biden for riots and property damage in cities including Kenosha and Madison.

As he has at other appearances, Trump implied that he had contracted COVID-19 through meetings with Gold Star families — military families who lost someone in the service. Holding those meetings "is risky," Trump said, "and sure enough, I caught it," referring to COVID-19. 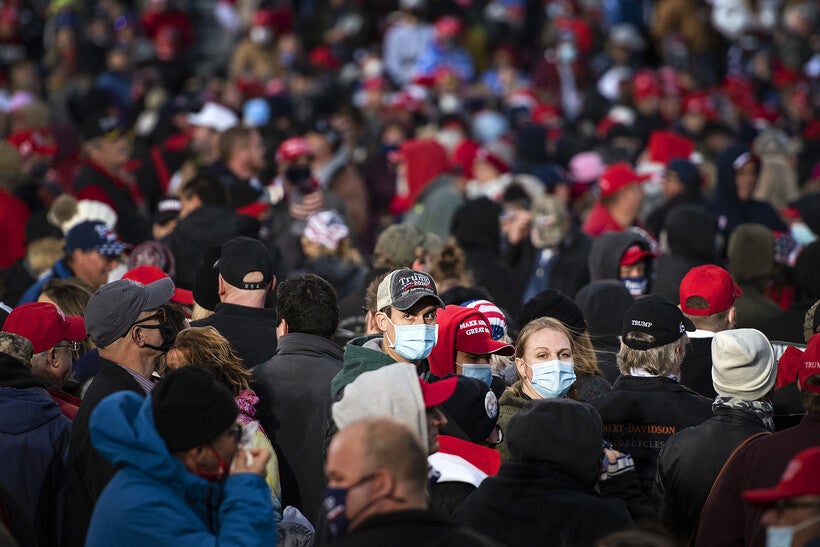 A supporter of President Donald Trump wears a mask in a crowd of thousands Saturday, Oct. 17, 2020, at the Southern Wisconsin Regional Airport in Janesville. Angela Major/WPR

Pandemic concerns were not on the minds of at least some of those attending the rally. Michele Heckermann traveled from Illinois to see the president. She said her husband is a retired Chicago-area police sergeant, and she supports Trump's "law and order" campaign message. Despite the rising number of positive cases of COVID-19 in Wisconsin, she said the pandemic is not on her mind.

Marcos Gallegos of Waukesha was among the president's supporters who did choose to wear a mask to the rally. He said he's worked as a machinist for 17 years, but that he struggled economically during the Obama administration. He said he doesn’t blame Trump for the U.S. pandemic response, and said he wanted to come to show that Latinos support the president. 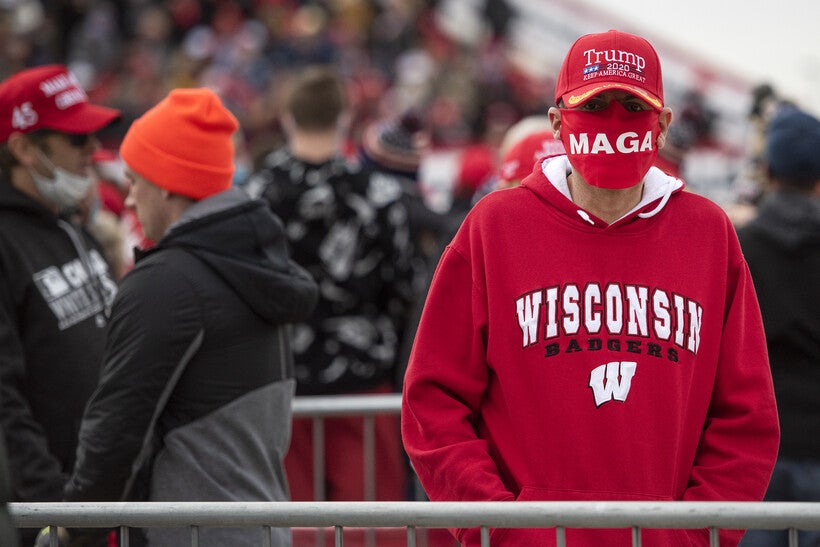 Marcos Gallegos of Waukesha attends a rally for President Donald Trump on Saturday, Oct. 17, 2020, at the Southern Wisconsin Regional Airport in Janesville. He said he doesn’t blame Donald Trump for the coronavirus pandemic. "He’s not losing my support," he said. Angela Major/WPR 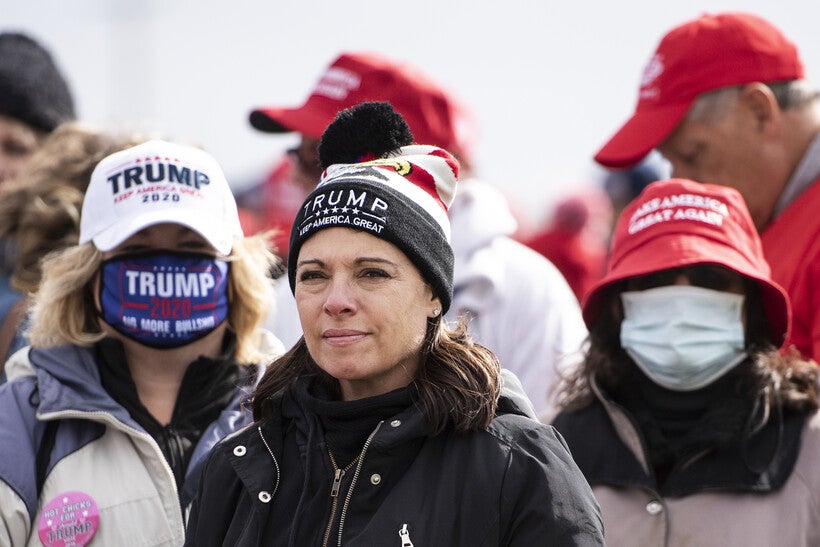 Michele Heckermann traveled from Illinois to attend a rally for President Donald Trump on Saturday, Oct. 17, 2020, in Janesville. Despite a rising number of positive cases of COVID-19 in Wisconsin, she said the pandemic is not on her mind. Angela Major/WPR

In a statement, Biden said Trump is "knowingly downplaying the severity of the virus."

"At virtually every turn, he has panicked and tried to wish it away, rather than doing the hard work to get it under control," Biden said. "My administration will trust the science, lead by example, speak the truth to the American people, and help Wisconsin families and small businesses build back better than before."

Trump has kept a busy campaign schedule since returning to the campaign trail on Monday. He's held events in Florida, Iowa, North Carolina and Georgia, as well as a Saturday rally in Michigan. But none of those states is experiencing as rapid an increase in new coronavirus cases as Wisconsin. In the last week, the state has repeatedly broken its own records for new cases and hospitalizations from the disease. On Tuesday, it recorded 34 deaths, the most ever in a single day.

Republican U.S. Rep. Bryan Steil, who represents Janesville, spoke to the crowd ahead of Trump's arrival, as did U.S. Sen. Ron Johnson, who himself tested positive for coronavirus on Oct. 4. Trump invited Johnson onstage with him, calling him one of his favorite people. 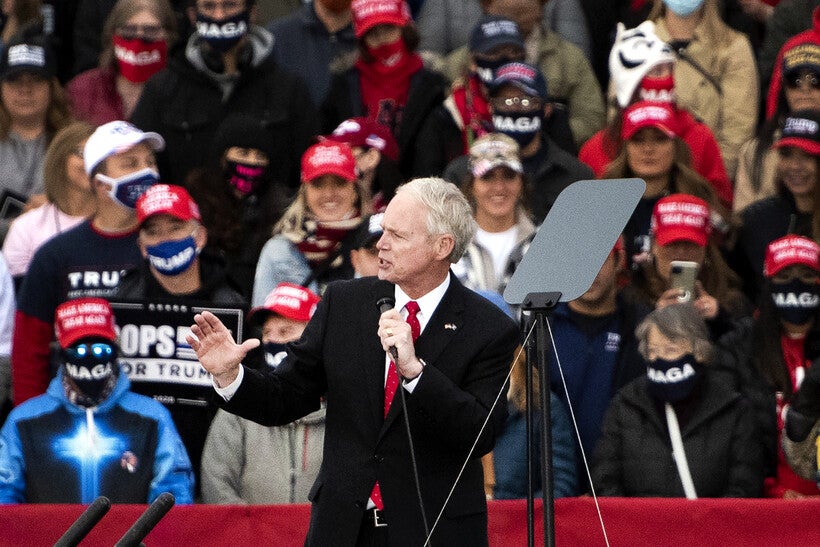 Polls show Trump trailing in Wisconsin, which is regarded as a key swing state in the presidential race.

Also on Saturday, U.S. Sen. Elizabeth Warren of Massachusetts, who was a Biden rival in the Democratic Party's presidential race, headlined a drive-in get-out-the-vote event in Madison, allowing supporters to keep their distance from others during speeches by Warren, Sen. Tammy Baldwin and Lt. Gov. Mandela Barnes.