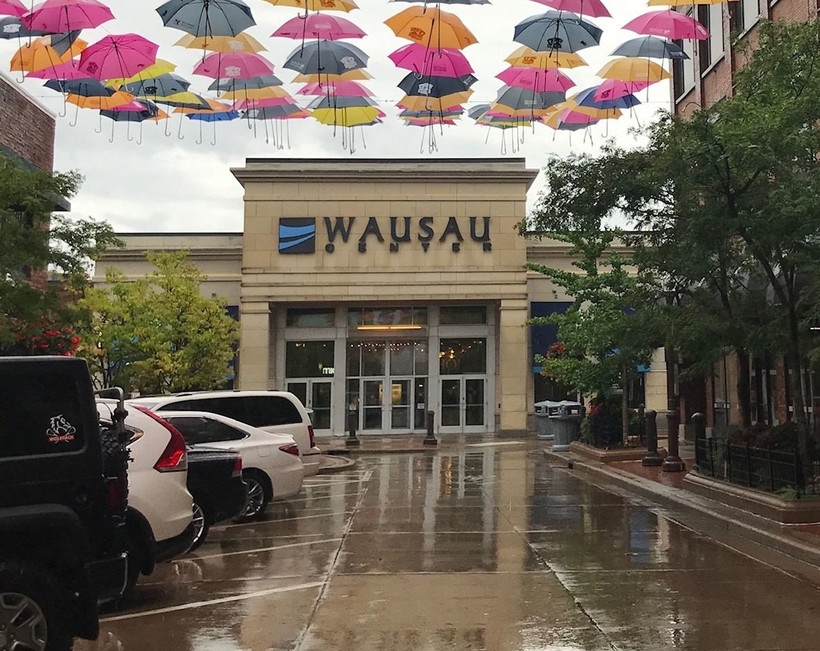 On a rainy day, Wednesday, Sept. 11, 2019, umbrellas hang over Wausau's Third Street outside Wausau Center mall. A consortium of local foundations is proposing to buy the struggling mall. Rob Mentzer/WPR

It’s a consortium of local foundations who say they have a plan to help the city take back control of the mall from out-of-state owners. Wausau city committees on Tuesday approved a proposal to work with the foundations to make the purchase happen.

Between 2014 and 2018, the Wausau Center mall lost all three of its anchor stores — J.C. Penney Co., Sears and Younkers — amid national declines in the retail industry. Today, the mall has about 50 percent occupancy. Earlier this year its owner, the Miami-based Rialto Capital, put it up for sale. Rialto is itself a recent owner of the property, having taken possession of the property after the Tennessee-based CBL & Associates surrendered it as a result of foreclosure in 2016.

Traffic to the downtown mall helps boost the city’s downtown business district, and the decline in visitors to the mall has been felt by other local retailers.

On Tuesday, elected leaders heard a new plan to save the mall.

Joe Mella, a spokesman for the new nonprofit, Wausau Opportunity Zone Fund Inc., detailed a proposal by which local foundations and the city would buy back the mall. The main local foundations involved, Mella said, are the Judd S. Alexander Foundation and the Dwight & Linda Davis Foundation.

Mella said the proposal "is a way to get control over the property, to try to stabilize it, catch our breath, think about what it is we really want to see happen with that property, and … rebuild something there that we really want."

Mella spoke before a joint meeting of the city’s finance committee and economic development committee. According to the proposal, the foundations would fund $2 million of a $3 million bid for the property. A city loan would fund the other $1 million. The bid was accepted, Mella said, contingent on the city agreeing to its part in the plan.

The consortium does not have a final picture of how the space would be used. Proposals have included conversion to community spaces, office space or an open-air retail strip as opposed to an enclosed mall. The purchase would allow local actors to make those decisions.

Mella painted a dire picture of how some companies profit from dying malls.

Andy Weiner, president of Houston-based shopping center operator Rockstep Capital, stressed the point, saying Wausau should beware of other firms bidding on the mall that are in the "asset depletion" business.

"They basically cut costs, do not reinvest in the property," Weiner said. "They get their capital out as quickly as they can."

The direction of the mall’s fortunes hasn’t been exclusively negative. Earlier this year, the furniture store HOM Furniture opened in the space formerly occupied by Younkers. A new Asian restaurant, Pho Zone, opened in April.

But given national trends of declines in small-city shopping centers, the long-term trajectory for Wausau Center does not inspire a lot of optimism. To many, the mall appears headed in the direction of downtown malls in other small cities. The Rapids Mall in Wisconsin Rapids was bulldozed in 2018 after years of decline; new construction of a YMCA and Boys and Girls Club is underway on the site. Stevens Point demolished its downtown mall in 2012.

Wausau City Council member Dennis Smith, who voted against the proposal, expressed skepticism that the consortium could act to save the mall — and doubt that its failure would harm the city.

"The mall is pretty much circling the drain," Smith said. "But it looks like the downtown is doing pretty OK."

Mella said the consortium will look at many options for the space, with an eye toward converting it into something sustainable.

Whether "it’s office, it’s housing, it’s entertainment, it’s retail, it’s open streets," Mella said, "some may be viable, some may not be. We also need to examine potential options that haven’t been presented to us yet."

The proposal will go to the full city council in October.