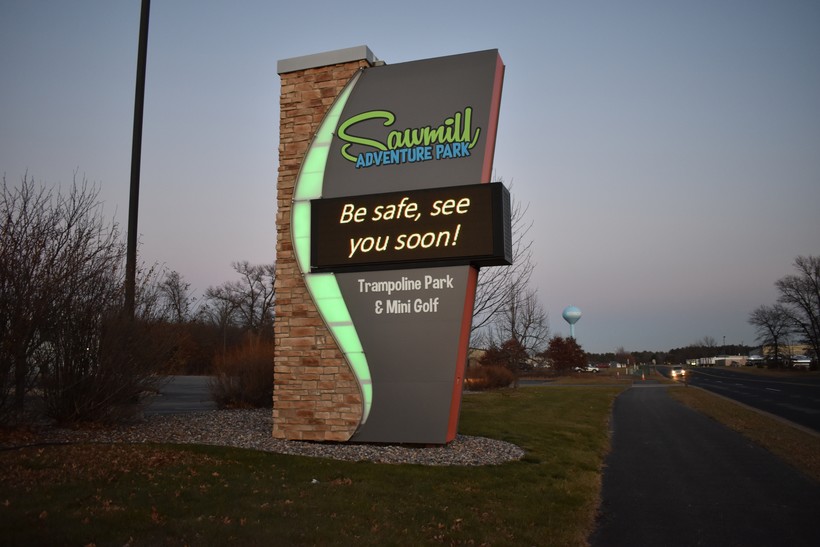 A sign for the Sawmill Adventure Park in Rothschild, Wisc. can be seen in this photo taken Wednesday, Dec. 2, 2020. The business announced it would close temporarily as an effort to help slow the spread of the coronavirus in the community. Rob Mentzer/WPR

Decision To Close Is A Window Into Pressures On Small Businesses Across Wisconsin
By Rob Mentzer
Share:

The owner of a small business in central Wisconsin said the decision to temporarily close is part of the business's effort to help control community spread of the coronavirus.

After months of trying to operate safely in the pandemic, Rothschild's Sawmill Adventure Park announced in a statement on Facebook this week that it would close temporarily. It wasn't in reaction to an outbreak at the business; the indoor trampoline park hasn't had employees or contact tracers connect them with one. Dylan Alwin said the decision to close their doors for weeks or months this winter reflects both the owners' sense of social responsibility — influenced by his brother, a nurse in a COVID-19 unit — and a business reality.

"(First) and foremost is: What are we doing individually to try to get through what we're all trudging through?" Alwin said.

The financial reality is that closing now allows them to control the losses they take in coming months, he said. The park has eight full-time employees and others who work part-time. They'll be laid off, and some other business expenses will be frozen while the park is closed. Alwin, who owns the business with his wife and sister-in-law, hopes closing for weeks or months now will help ensure Sawmill can reopen in 2021.

The pressures faced by Sawmill's owners are a window into the experiences of small business owners across the state.

The pandemic in Wisconsin has worsened at the same time that many of the aid programs designed to help businesses have expired. Prospects for new federal relief are uncertain at best; and at the state level there appears to be little bipartisan agreement about new COVID-19 legislation in Madison.

In the absence of new government relief, not all businesses have the ability to close, even temporarily.

In October, Gov. Tony Evers announced a new aid package worth $100 million which included some grants targeted to hard-hit sectors including performance venues. But some small business owners have said the available state grants are not enough to keep them afloat, and hundreds of businesses across the state have already closed their doors. In October, the Wisconsin Restaurant Association said the state's bars and restaurants were hit especially hard, with many of them closing permanently due to the pandemic.

Sawmill opened in 2019, and Alwin said its first full year in operation was a success, which provided them with a financial cushion in 2020. They closed during Wisconsin's stay-at-home order in March and reopened in June. For a period of time, they were roughly breaking even as a business — which, in 2020, Alwin said he would have considered a success.

"But then in September and then October and November (business) was drastically declining," he said. "With the small amount of people that we had coming through the doors anyway, it was getting worse."

Early in the pandemic, Sawmill received a business loan through the federal Paycheck Protection Program. It allowed Alwin to keep some staff members employed during part of the shutdown. More recently, Alwin applied for and received a $5,000 grant through Wisconsin's "We're All In" program. That funding will help them pay their business mortgage and utility costs as they wait to reopen.

Ultimately, though, he said the decision to close was less about their bottom line and more about public health. In their statement, the owners wrote that "we have loved ones who work at local health care facilities, and it is continually hard to ignore the effect this is having on our frontline workers."

It was a reference to one of Alwin's brothers, a nurse who works in an intensive care unit in Wausau. He's shared the experience of working in the facility, which like other hospitals around the state has strained to deal with the surge of patients.

"He said, 'This is for real; this is getting out of control,'" Alwin said. "And he said it's very difficult for him to see people not trying to do their part more."

Alwin isn't sure when Sawmill will reopen.

"At this point I believe we're just going to take it month by month," he said. "The main determining factor right now will be, how do the numbers look? How are the hospitalizations in the area and the state going?"

And, he said, they'll be monitoring how many people have been vaccinated against the coronavirus. Alwin is hoping 2021 will be a very different year than 2020 has been.