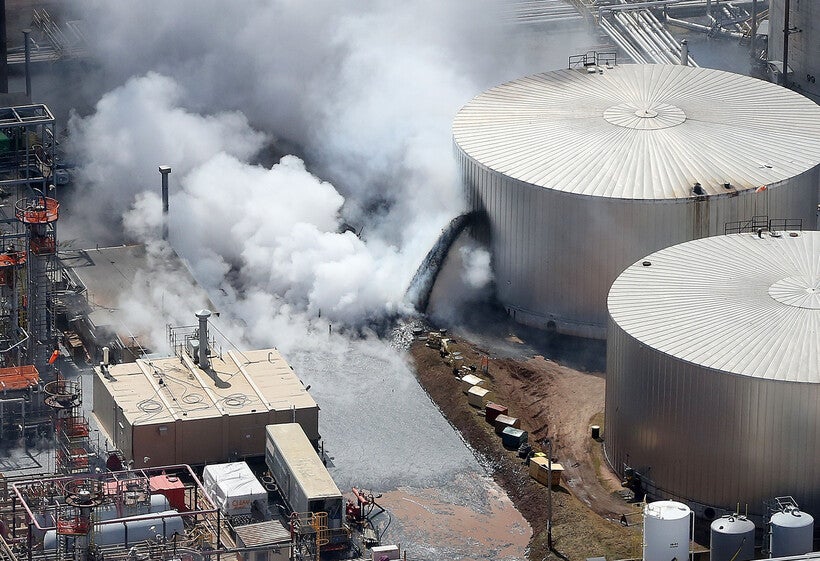 Levels of petroleum and firefighting foam compounds have declined in a creek downstream from the Husky Energy oil refinery in Superior. The Wisconsin Department of Natural Resources continues to monitor water quality with the company.

An explosion at the refinery in April 2018 punctured a tank that spilled around 17,000 barrels of asphalt and set off a series of fires that took hours to put out. Levels of petroleum compounds have dropped to the point where the refinery is no longer testing for them.

Connie Antonuk, field integration leader with the DNR, said they're still sampling for firefighting foam, which contains per- and polyfluoroalkyl substances known as PFAS.

"The levels have dropped off significantly, but they’re still there at very low levels," she said.

Antonuk said the chemicals repel both oil and water and don't break down easily in the environment. The chemicals have been used by the industry in everyday products, including cookware, water-resistant fabrics and firefighting foam.

The Environmental Protection Agency is under pressure to set safe drinking water standards for the chemicals after studies have found links between PFAS, cancer and other health issues. The federal agency plans to propose a maximum level for the two most common PFAS chemicals — PFOS and PFOA — by the end of this year. Perfluorooctanesulfonate acid (PFOS) and perfluorooctanoic acid (PFOA) are among the most widely studied PFAS chemicals.

Antonuk said the levels present are no cause for concern.

"The levels are extremely low," she said.

In 2016, the EPA established health advisory levels of 70 parts per trillion for lifetime exposure of the two chemicals in drinking water. Newton Creek is not a source of drinking water as the city of Superior gets its drinking water from Lake Superior. The water is sourced from an intake structure that is about 300 feet off of Minnesota Point and 10 to 12 feet beneath the lake floor, according to Superior Water, Light & Power.

The refinery has collected around 21 million gallons of firefighting water used on April 26, the day of the explosion, and treating it to remove PFAS, according to the DNR and Husky Energy.

A series of explosions and fires at the Superior oil refinery caused the temporary evacuation of residents on April 26, 2018. Olivia Shalaby/WPR

"It was necessary to use water and firefighting foam last April to extinguish the fire, and water containing firefighting foam was contained on-site as soon as was practicable," said Husky spokeswoman Kim Guttormson in an email Monday. "Working with the WDNR, we installed a system designed to treat PFAS, consisting of specialized granular activated carbon followed by a resin designed to further target the removal of PFAS compounds if needed. It has worked as designed."

The DNR is currently working to develop its own state water quality standard for PFAS. The agency is also looking at requiring wastewater treatment plant permits to have a standard for PFAS as well, Antonuk said.

Husky Energy has been working closely with the DNR to collect surface water samples at the refinery and along the creek as winter conditions allow.

"The samples from Newton Creek since last April are comparable to baseline samples collected before the incident under normal refinery operating conditions, with the exception of trace amounts of PFAS-related compounds," said Guttormson.

Newton Creek has long been listed as an impaired water in the state because of the presence of pollutants and its limited fish community. The creek and the Hog Island Inlet of the Superior Bay have been the subject of restoration efforts in the last decade. Wetlands were constructed at the headwaters of Newton Creek and improvements were made to the refinery's wastewater treatment facility to control industrial sources of contamination, according to a 2014 DNR report.

"The fish surveys have shown that in the last survey there has been an excellent recovery over the season and an exceptionally good fish population in October," said Antonuk.

In April, she said staff found 18 fish and three different species. The October survey found 79 fish and 15 different species, which is the most fish that has been observed at the Third Street area of Newton Creek. Antonuk said impacts to aquatic life appear to be minimal. The DNR plans to conduct another survey this year.

At the refinery, efforts remain ongoing to clean up asphalt that was spilled as a result of the explosion. Antonuk said a hydrogeologist has been assigned to work with company. The company will be required to do a thorough site investigation of that area and remedial action plan. Husky has been removing piping near the damaged asphalt tanks so additional asphalt can be removed. More than 5,000 tons of asphalt has been removed from the site.

Editor's note: A previous version of this story reported that the city of Superior tested for PFAS in 2014 when it was actually Superior Water, Light & Power who conducted testing. The story has been corrected.