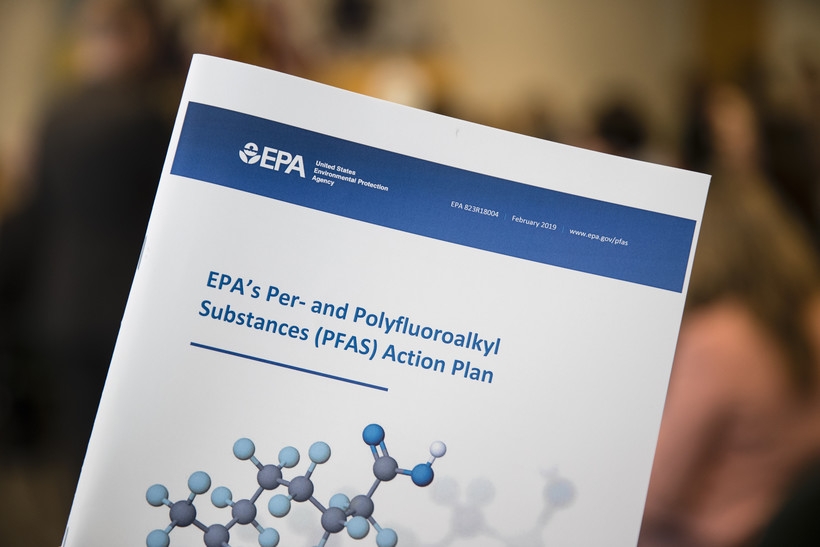 Displayed is an EPA report ahead of a news conference in Philadelphia, Thursday, Feb. 14, 2019. Under strong pressure from Congress, the EPA said Thursday that it will move ahead this year with a process that could lead to setting a safety threshold for a group of highly toxic chemicals in drinking water. Matt Rourke/AP Photo

The U.S. Environmental Protection Agency released what it calls a "historic" plan to address PFAS contamination.

PFAS — or per- and poly-fluorinated compounds — are chemicals found in household products that can be harmful to humans.

The EPA says it will advance on several fronts: drinking water, clean up, enforcement, monitoring, research and risk communications.

By the end of this year, it will propose a maximum level in drinking water for two of the most common PFAS chemicals, PFOA and PFOS, which is the next step under the Safe Drinking Water Act. It is also in the progress of listing those two compounds as "hazardous substances," and will provide "interim groundwater cleanup recommendations" for sites currently contaminated with PFOA and PFOS.

"The PFAS Action Plan is the most comprehensive cross-agency plan to address an emerging chemical of concern ever undertaken by EPA," said EPA Acting Administrator Andrew Wheeler in a press release. "For the first time in Agency history, we utilized all of our program offices to construct an all-encompassing plan to help states and local communities address PFAS and protect our nation’s drinking water."

Eric Uram, chair of the National Toxics Committee for the Sierra Club and a Madison resident, said of the EPA’s plan: "It’s the do-nothing-action plan. We’re pretty disappointed with the EPA in this regard. They are not taking public health and environmental health very seriously with this."

Research has linked PFAS exposure to health risks such as thyroid problems, high cholesterol and cancer.

"It’s extraordinarily disappointing," said Laura Olah, executive director of Citizens for Safe Water Around Badger and coordinator for the PFAS Community Campaign. "The EPA's basically kicked the can down the road and they're not gonna be addressing it appropriately."

Olah’s been a leading activist for PFAS regulation in Wisconsin, and has successfully petitioned the DNR to develop a water quality standard. She and others have pushed the Wisconsin Departments of Natural Resources and Health Services to set groundwater quality standards for PFAS, which is expected mid-2019. Although the standard DHS is currently developing pertains to PFOA and PFOS, Olah says her group has successfully petitioned state officials to expand their consideration to 24 of the compounds.

The federal agency’s plan, meanwhile, is too slow, say Olah and Uram.

The Wisconsin DNR’s Darsi Foss said they appreciate the EPA’s efforts to begin addressing the PFAS concerns and that the maximum contaminant level being developed by the EPA is "probably a needed step."

"However it's going to take years before that is in place," Foss said. "And we feel like these issues are facing states and communities across the country now and need immediate attention."

One of those is in Madison, where PFAS is believed to have come from the National Guard Airfield. Last week, the Madison Water Utility Board took action toward further regulating PFAS, which included convening a taskforce of local, county and state stakeholders.

According to a press release, officials "met to discuss possible PFAS contamination at two burn pits located on opposite side of Truax Air Field." The Air National Guard hopes to conduct an investigation — through methods such as soil boring and groundwater sampling — into the extent of contamination from one of these pits.

The Madison Water Utility Board plans to draft a letter to Wisconsin’s Congressional representatives to seek funding for an investigation and remediation.