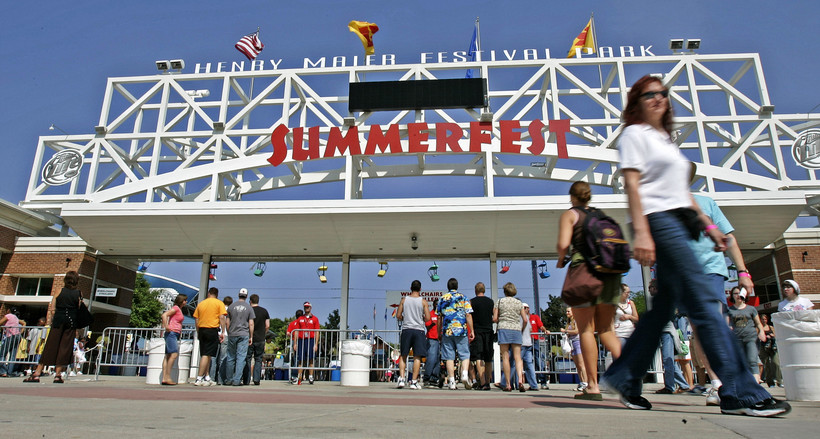 Want To Go To Summerfest? You Need To Prove You’re Vaccinated Or Have A Negative COVID-19 Test.

Summerfest attendees will be required to show proof of a COVID-19 vaccination or a recent negative test to enter the annual multi-day music festival next month.

The requirements go into effect Friday for a separate concert being held at the American Family Insurance Amphitheater at Henry Maier Festival Park, where Summerfest is held.

"We’re trying to create a safe environment for everybody," Babisch said. "We lost a lot of business last year, a lot of revenue lost, and we want to make sure that we don't lose any of our bands this year."

He said organizers were already having discussions with several musicians about screening audience members and the event wanted to implement their own protocols before artists started requiring them.

"You're starting to see it with all of these tours. Not just with the festivals that are out there, but you’re starting to see bands come back and say 'If we’re going to do an event, we want to do it in a venue that's safe. So we want to have vaccination and testing (requirements) in those venues,'" Babisch said.

Jason Isbell & The 400 Unit, one of the headliners for Blue Ox Music Festival in Eau Claire, announced on Monday that the group would be requiring proof of vaccination or a negative test for people to attend both their indoor and outdoor shows. Isbell said in a tweet that if a venue won’t allow the requirements, the group will not play.

A spokesperson for Blue Ox Music Festival did not return requests for comment.

The city of Milwaukee Health Department voiced their support for Summerfest's new requirements, saying in a press release that the plans would protect festival staff, vendors, performers and attendees.

"We are pleased with their proactive decision to implement these additional safety measures and ensure festivalgoers can feel comfortable attending this beloved music fest responsibly," Milwaukee Health Commissioner Kirsten Johnson said in the release.

All concert attendees will be asked to show a valid COVID-19 vaccination card or proof of a negative test from the last 72 hours. The event will accept a printed copy of the documentation or attendees can show it in digital form, such as a screenshot or photo on a phone.

Children under the age of 12 do not need to be tested, but they will be required to wear a mask. Event organizers are recommending mask use for anyone who is unvaccinated and for all attendees in indoor spaces like restrooms.

The changes come at a time when the delta variant is rapidly spreading across the state and country, leading to a significant increase in cases and hospitalizations.

Summerfest is Wisconsin’s largest festival, and it draws about 800,000 people from Milwaukee, the state and around the world.

The music festival typically takes place from the end of June into the beginning of July. This year, it will be held September 2-4, 9-11 and 16-18. The 2020 festival was canceled because of concerns over the coronavirus. It was the first time the festival was called off in its 53-year run, an economic loss of $186 million.

Indoor performance venues across the state are also grappling with artist requests for vaccine or test requirements and pressure from the rising case numbers.

In Madison, the Overture Center for the Arts has already announced one of the venue's shows opening in September will require audience members to show proof of vaccination or a negative test. The center has been closed since March 2020 and has said all attendees will be required to wear a mask, regardless of vaccination status, when shows reopen next month.

Tim Sauers, chief artistic experiences officer, said the center is in discussions about  audience screening requirements for other performances, so they’re considering whether to implement those protocols building-wide.

He said that would mean additional costs like apps or other technology used to verify someone’s vaccination or test status. But he said it would be worth it in order for the performance center to finally open and remain that way.

"What we want to do as an industry is open our doors, get the artists back on the stages, getting those productions produced, the tours happening and not have to shut back down. That's our goal," Sauers said.

Sauers said other venues across the state are making similar assessments. But he said each community is different in how the public feels about the pandemic.

"I do know that our colleagues all are like Overture Center and really want to assure that everyone is safe while they remain in the building to see a show," Sauers said.

He said the Overture Center will likely make a decision about any new protocols in the next week to ensure enough time to update ticket holders and train staff.