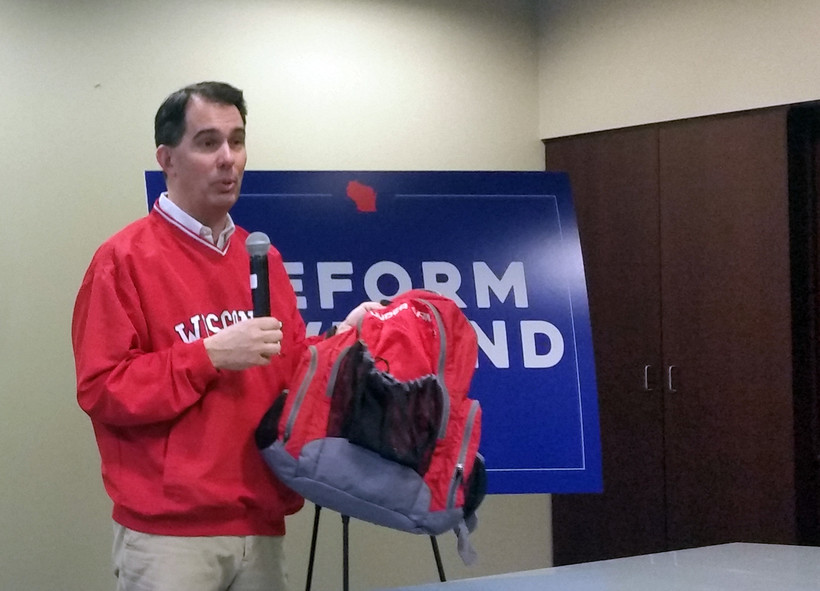 With A School Bag In Hand, Walker Touts Prospect Of Extra Cash For Parents
By Chuck Quirmbach
Share:

During his State of the State speech, Walker proposed creating an annual $100-per-child tax credit starting this year for parents with kids under 18 who live at home.

At a Thursday morning news conference in Milwaukee, the governor used a backpack to emphasize that parents might use the money to buy school supplies.

Funding for the proposed tax credit would be covered by a current state budget surplus. Asked whether a permanent credit could remain sustainable if the surplus ever shrinks, Walker replied, "It's a pretty compelling reason to keep me as governor."

Democrats say Walker is playing election-year politics, and that making parents go online to apply for a rebate check this year is not the easiest way to return money to taxpayers, criticisms that Walker dismissed.

State lawmakers still have to approve the tax credit. Walker emphasized the rebate application website wouldn't be up until May, and that rebate checks wouldn't be issued until September.  The liberal group One Wisconsin Now said the governor is literally seeking to buy votes, handing out money months before the November election.