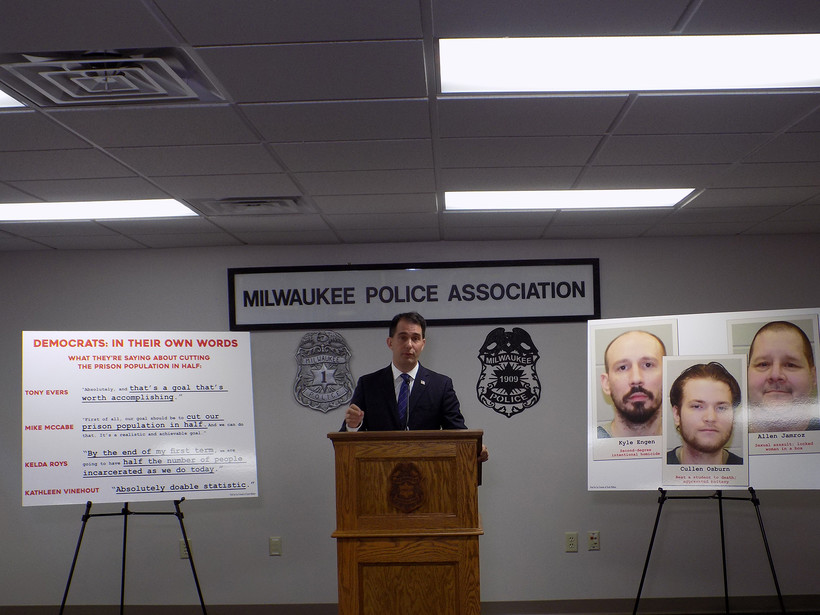 Gov. Scott Walker Has Yet To Visit A Prison In Wisconsin
By Ximena Conde and The Associated Press
Share:

Gov. Scott Walker said he's yet to visit a prison in Wisconsin and he doesn't plan to if he's re-elected.

The Republican governor made the comments Tuesday during a news conference to criticize Democratic gubernatorial candidates who say they want to reduce the state's prison population by releasing some inmates early.

Walker said he wants to let staff hired to run the corrections system do their jobs and that adding inmate job training is a better alternative to reforming the correctional system than releasing offenders early.

Walker pointed to the state’s most current inmate profile report. It shows 67 percent of inmates are violent offenders. He argued about 4,000 violent offenders would have to be released in order to achieve a 50 percent cut in the prison population.

"There’s this incredible myth out there by some on the far, far left in this state and in this nation that our prisons are somehow just filled with people who have a mere possession of marijuana — that's just not the case," Walker said.

Walker said "there cannot be a starker contrast" between himself and his potential opponents because he wants to keep convicts "in for their entire sentence." He called the Democrats' proposals "dangerous."

Still, the Democratic Party of Wisconsin and some of his Democratic challengers condemned Walker’s remarks regarding the value of prison visits. Some pointing to a federal investigation into abuse and neglect at the Lincoln Hills and Copper Lake schools, the state's juvenile prisons.

Even before Walker spoke to reporters, liberal group One Wisconsin Now had already released a statement condemning Walker for "doing nothing" to address problems at the juvenile prisons.