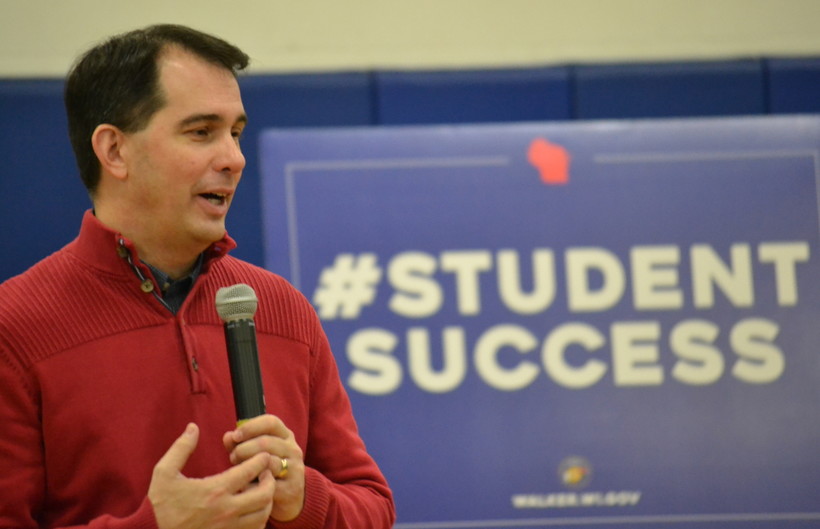 Gov. Scott Walker has announced his support for legislation that would increase aid to small, rural school districts.

Walker traveled to Athens, a village in rural Marathon County with a population of 1,105, to push a bill introduced by Rep. John Nygren, R-Marinette.

The bill would increase sparsity aid, or payments to small districts, from $300 per student to $400, and would increase the low revenue ceiling, which would allow low-spending districts to increase property taxes without a referendum.

"This is just one more tool to help local school districts, particularly smaller rural districts that have been revenue-challenged in the past, have the resources they need," Walker told reporters after speaking to a group of high school students.

Walker praised one of his gubernatorial opponents, state Superintendent Tony Evers, for supporting the push for rural school aid. He attacked other Democrats who called the push an election-year ploy.

"Dr. Evers, to his credit actually, praised what we did yesterday because he was being intellectually honest unlike the others," Walker said. "I proposed this a year ago. So if they're saying it's an election-year ploy, the only ploy being made is by those who are cynics, opposing it now who didn't oppose it last year."

"Sparsity aid for us at the moment is $130,000 dollars which kind of equates to having two additional teachers to support mental health issues, school counseling," Macke said. "An additional $100 based on our school population of 420, that's a nice chunk of change to support some additional needs that we have."

But Macke said the legislation, although helpful, would not be enough to help rural districts in the long run. He called for a change in the state school funding formula.

"It's a struggle at times. It really is, and I think we need to take a look at things differently, comprehensively, down the road," he said. "It is time to really look at the big, big, big picture of how schools are funded."

Still, Macke said he was grateful that political leaders were paying attention to districts like his.