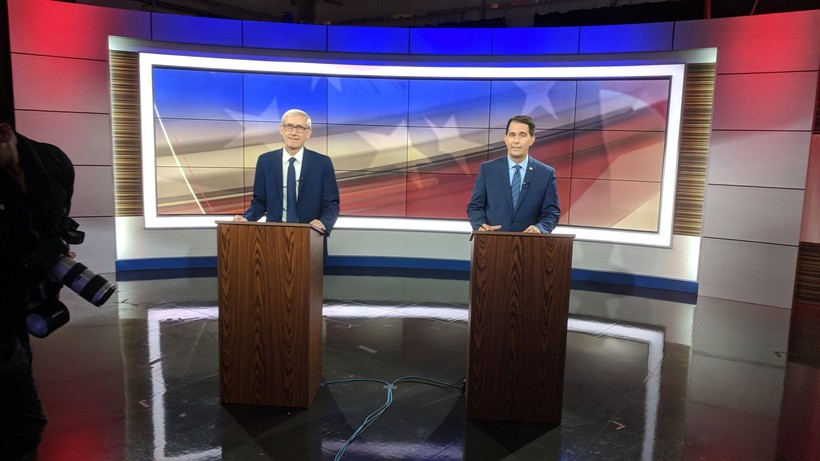 Gov. Scott Walker and Democrat Tony Evers are tied at 47-47 with less then a week until Election Day, according to the final pre-election poll from Marquette University.

The poll, released Wednesday, surveyed 1,154 likely voters from Oct. 24-28, and has a margin of error of 3.2 percent. Respondents were 46 percent Republican and 47 percent Democrat.

"It's always been close," Evers said Wednesday after a campaign stop in La Crosse. "So it doesn't surprise me. We believe we're doing so well because we're focusing on issues the people of Wisconsin care about."

The Evers campaign touted the results in a tweet, saying Democrats have "never been this close to beating (Walker) so close to Election Day."

The governor also tweeted shortly after the results were released, asking his supporters for their help.

The last poll, conducted in early October, showed Walker leading Evers by 1 point. Since June, the Marquette Poll has shown the governor’s race locked within a 5-point margin.

"I think you just look across that stream (of polls) and it's hard to conclude anything other than a true toss-up race," said Charles Franklin, the poll's director. "This race could clearly tip either direction, based on our data."

The poll showed Evers leading Walker among independents by a 7-point margin. However, it also showed more Democrats shifting their support from Evers to Libertarian candidate Phil Anderson than GOP voters shifting away from Walker. Anderson polled at 3 percent in the latest survey.

The governor's approval rating ticked up slightly, from 48 percent earlier in October to 50 percent in the new poll.

In the U.S. Senate race, incumbent Democrat Tammy Baldwin continued to hold a lead over her GOP challenger, state Sen. Leah Vukmir. The latest result had Baldwin with the support of 54 percent of those surveyed, compared to Vukmir’s 43 percent. Last month, that margin was 53-43.

"This race, in contrast to the governor’s race, has in our data mostly not been close," Franklin said.

The race for state attorney general tightened since the last poll, which saw incumbent Brad Schimel leading his Democratic challenger Josh Kaul 47 percent to 43 percent. That tightened to 47-45 in the latest survey.

As speculation continues about strong turnout for Democrats, the poll found 81 percent of Democrats are "very enthusiastic" about voting in the election, compared to 74 percent of Republicans.

On the issues, respondents continued to express strong interest in health care, the economy and education funding. About one quarter of those surveyed said health coverage was the most important issue leading up to the Nov. 6 election. The economy and K-12 education were tied in second place, respectively, followed by road projects.

The majority of respondents said they support increasing education funding over tax cuts, and 58 percent said teachers should be paid more and receive better benefits.

In contrast, most of those surveyed don't support a gas tax increase in order to increase spending on road projects.

The poll comes just five days before Election Day, as the campaigns make their final arguments to voters, including via rallies featuring high profile guests like former vice president Joe Biden and President Donald Trump's son Eric Trump.
Editor's note: This story was updated at 4:11 p.m. Oct. 31, 2018 with comments from the Evers and Walker campaigns.