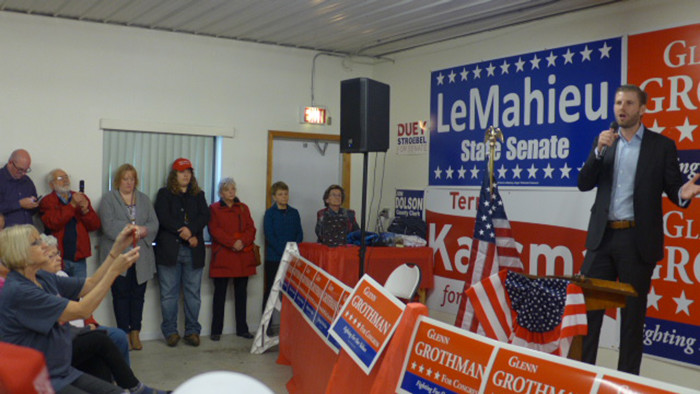 Eric Trump Stumps In Sheboygan For US Rep. Glenn Grothman

Eric Trump made a stop in Sheboygan on behalf of Wisconsin U.S. Rep. Glenn Grothman.

It was a relatively low-key event Tuesday at the Republican Party of Sheboygan County headquarters in the southeastern Wisconsin city on the shores of Lake Michigan. A few hundred supporters and Republican volunteers attended to hear President Donald Trump’s son encourage people to "get out the vote."

Grothman is in a re-election bid, with the two-term Congressman facing off against Democrat Dan Kohl — the nephew of former Sen. Herb Kohl — for Wisconsin's 6th Congressional District seat.

Trump’s appearance began with a moment of silence for the 11 worshippers who were killed over the weekend at a synagogue in Pittsburgh.

When asked why he was campaigning in Sheboygan, Trump said, "It is a state we know, a state we love. We want to be here for Glenn."

Trump indicated Grothman has been a loyal Republican vote in the House of Representatives.

Trump stressed that he appeared as a "surrogate" for his father and that he has no political ambitions.

In his remarks, he reiterated his father’s line that "American is winning," telling reporters, "We are in a competitive time and people have to get out and vote."

He also spoke in favor of President Trump’s suggestion that children born to immigrants living in the country without documentation should not be given American citizenship.

On a teleconference to support state Sen. Leah Vukmir in her bid to the U.S. Senate, former Speaker of the House Newt Gingrich said he saw President Trump’s comments on ending birthright citizenship as the president stating his opinion. Gingrich said he thought there was not enough time before next week’s election to issue an executive order.

"I would think it would be more stable to send it through the Congress, have hearings, make sure we thoroughly understand what we’re doing and then enact appropriate legislation," Gingrich said.

He said presidents can issue executive orders, and if Trump did issue one to change birthright citizenship, it would be met with legal challenges and end up before the U.S. Supreme Court.