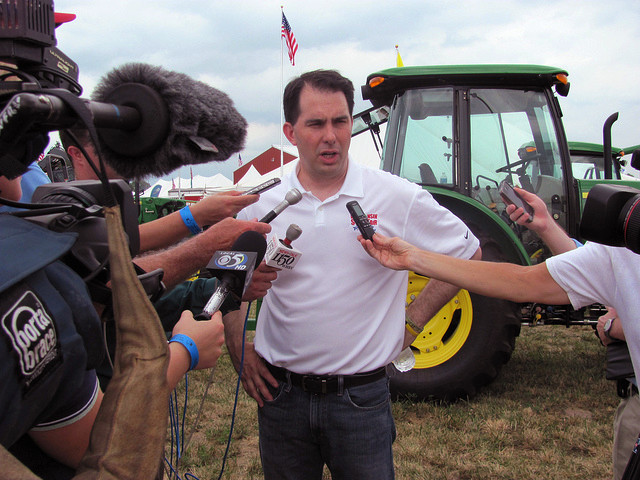 Governor's Environmental Record Has Come Under Heavy Fire Over Past 4 Years
By Chuck Quirmbach
Share:

When Gov. Scott Walker campaigned in 2010 and 2012, he promised to approach environmental issues with a mindset he adapted from his Boy Scout days: he would leave a campsite (in this case, the environment) cleaner than he found it. It’s a promise that some say is at odds with another Walker pledge: to help create 250,000 jobs in the state.

Last week, Walker attended a recent ribbon-cutting ceremony for a company's new distribution center in Germantown. The building isn't yet ready to be occupied, but it's as far along as it is partly because the Wisconsin Department of Natural Resources moved quickly on a wetlands review for the site.

Walker said that faster reviews are part of a wetlands bill he signed into law two years ago.

“It helped speed up the process,” he said. “When you’ve got projects like this, we still want to have wetlands, we still want good air, good land, clean water, but we want to do so in a timely fashion.”

Democrats called the law the “Flood Our Families Act,” contending more building in wetlands will boost downstream flooding. What’s more, the bill is hardly the only part of Walker’s environmental record that been met with criticism. Various groups and individuals are also upset with the governor over his handling of renewable energy environmental enforcement, wolf hunting and the use of dogs therein, and frac sand mining.

Then, there’s what has arguably been the most high-profile environmental issue during Walker’s term: the proposed iron ore mine in northwestern Wisconsin.

At last Friday's debate, Democratic challenger Mary Burke brought up the recent discovery that mining company Gogebic Taconite donated $700,000 to a conservative group that contributed heavily to Walker’s recall election campaign. She said there was a link between those funds and a recently passed mining law that critics say weakens protections for land and water.

“Governor Walker changed the rules so that we had (GTAC) strip-mining in our Northwoods,” said Burke.

Walker has denied being influenced by the campaign donation, and has said that the DNR is closely reviewing the still un-built mine.

Burke declined to be interviewed for this story, but her campaign sent a statement in which she promises to bring together all stakeholders to find the right balance between economic development and our public health and natural resources.

Those are welcome words in part of the state troubled by contaminated runoff from big farms. Mashek Creek is a stream that flows through eastern Kewaunee County and into Lake Michigan. Family farm owner Lynn Utesch said that the waterway often has elevated levels of bacteria due to liquid manure runoff. He said part of the problem comes from actions by governors before Scott Walker.

Nevertheless, Utesch said that Walker hasn't done enough to reduce the pollution, and that it's time to see what a Burke administration can do.

“We know what we’re going to get if we get a re-election of Scott Walker,” said Utesch. “(With) Mary Burke, I believe, at the minimum we will at least get a new secretary of the DNR, and new secretary of … agriculture, which we could hope would be something better.”

One group, the Wisconsin League of Conservation Voters said it's spending $1 million to spread concerns about Walker's environmental record. The governor, however, insists that the campsite is cleaner.

“What we try to do are smart moves that both sustain the environmental standing in the state but do so in a way that make us economically sustainable,” he said.