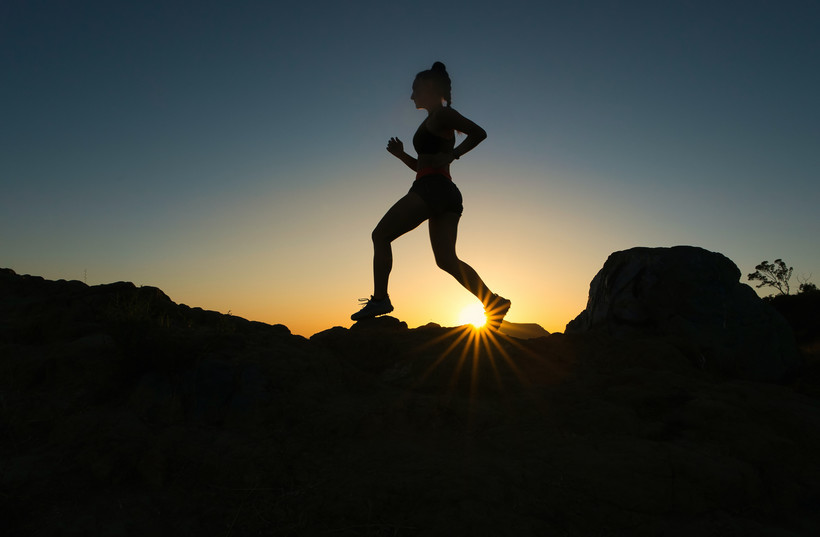 A woman runs up a trail during sunset. Cameron Venti (CC0)

Walk, Run, Swim Or Bike — The Most Important Exercise Is Merely Movement

NYT Fitness Columnist On Getting The Most From Your Daily Workout
By Mark Riechers
Share:

Gretchen Reynolds writes the Phys Ed column for the New York Times. In her book "The First 20 Minutes," she breaks down the science of how to get the most from the time you have to spend on exercise.

Speaking to Anne Strainchamps for "To the Best of Our Knowledge" in 2012, Reynolds explained why movement is so important to our daily health, why running might be overrated, and how a little bit of pain can really maximize the benefit you see from your daily workout routine.

On humans being "born to run."

Gretchen Reynolds: The science actually doesn't really support that idea, that we're born to run. It appears both from the fossil record and from sort of anecdotal evidence that we actually are born to walk. The human structure, the skeleton, is much more efficient at walking than at running.

When they bring people and other animals into the lab and put all of us, the people and the other mammals, on treadmills, and test how well we move, humans are exceptionally good at walking.

We are better than almost any other mammal in terms of how well we use energy, and we're really poor in terms of running. We're not nearly as fast, or as efficient, or as speedy as most other mammals. We just like doing it.

On the benefits of running.

GR: The human body definitely needs to be moving, and running is a really good way in a concentrated period of time to move. But the best science suggests that moderation, unsurprisingly, is the ideal approach to running.

There was a really interesting study that was presented at a meeting of the American College of Sports Medicine that looked at what amount of running will give you potentially the longest lifespan — it wasn't a lot of running. It was running about 3 miles, four, maybe five times a week, at a pretty slow, or at least moderate pace of about 10 to 11 mph, which for a really serious runner would be considered slow. That's a really manageable amount of running.

There's some evidence that doing a lot more running may not necessarily be healthy, and doing a whole lot less, you won't get quite as many health and fitness benefits. But that moderate amount of running appears to be the absolute sweet spot.

The most important part of getting in shape? The first 20 minutes.

GR: If your goal is to be healthy, to have less risk of heart disease, diabetes, dementia, obesity, then it appears that the first 20 minutes of moving will provide most of those health benefits.

And that's any type of moving, it doesn't have to be running. Walking, cycling, going up stairs, gardening. Any type of human movement is really important for health, and most of the benefits of exercise or activity in general, are gathered in the first 20 minutes compared to sitting on the couch.

And those 20 minutes don't have to be all at once, either.

GR: There's very good science suggesting what scientists call "fractionalized bouts of exercise" — which means 10 minutes at a time, even five minutes if that's all you can manage.

High intensity training can pack 90 minutes of exercise into a 30-minute session.

Do that 10 times — which would be 20 minutes — with a short, say, five minute warm up, five minute cool down. Then in 30 minutes, scientific studies suggest you can get both the health and the fitness benefits of about 90 minutes of much slower endurance exercise.

So if you want to be both more healthy and fitter, and you have very little time, all you have to do is make yourself really uncomfortable for about a minute at a time. The studies say it was at least 90 percent of their heart rate maximum, which you can determine by using formulas. But you can also just be honest with yourself — you want it to be about a nine on a scale of 1-10 of how hard this feels. If people are honest with themselves, they usually can tell whether they're at about 90 percent of their maximum.

Does high-intensity exercise have to feel miserable?

GR: It's only for a minute, and what's interesting is when (scientists) have asked people afterwards "did you like this kind of exercise?" they almost always said they liked it better than longer, slower exercise because it got done quickly.

Is sitting all day killing us?

GR: One of the things I've found most interesting in the reporting that I've done is there's a whole new understanding that sitting a lot — even if you regularly exercise — is very unhealthy.

There's a modern phenomenon that's called the "active couch potato" — and that is many of us actually, including me. And that's people who may exercise at lunchtime and then sit the entire rest of the day. That's really unhealthy. The exercise will not completely undo the health problems of sitting for eight, 10 hours a day, which is average for Americans.

What happens when you sit for really extended periods of time is a number of systems start malfunctioning in your body. You start producing less of an enzyme that breaks up fat in your bloodstream. That fat then goes to your muscles, your heart, your liver. The big muscles in your body aren't contracting, so you're not pulling as much blood sugar out of your blood, so you start having too much insulin. That's the beginning of Type 2 diabetes, insulin resistance.

So what do we do?

GR: The answer is actually surprisingly simple. Stand up. There's very good and growing evidence that standing up about every 20 minutes is really important for good health.

And it doesn't mean that you have to do anything while you're standing up. You don't have to jog in place, you don't have to run, you don't have to do jumping jacks. You can if you choose to, but there have been a number of studies that have found that if you stand up about every 20 minutes for two minutes, the big muscles in your legs and your back will contract. That increases the amount of enzymes that break up fat, it means you're pulling more blood sugar.

They have found that just standing up more often reduces heart disease risk and diabetes risk. It also has been found to help with weight control. If you sit unendingly for hours, for six, seven hours, there are implications for weight gain.