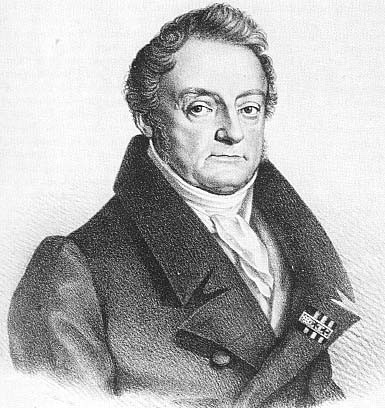 Waldstein.  The name is best remembered because Beethoven wrote one of his best piano sonatas for his friend and patron.  The sonata remains as a monument to Waldstein.  The friendship and patronage were a good deal less constant.

Count Ferdinand Ernst Gabriel Waldstein und Wartemberg von Dux, Knight of the Teutonic Order, was born eight years before Beethoven, on March 24th, 1762.  He met the twenty-year-old Beethoven in Bonn at the home of mutual friends.  Waldstein was handsome, erudite, poised, charming and witty. He was also moody and very opinionated politically, an Austrian nationalist who had no use for the French. He was a pianist and fancied himself a composer.

In 1791 Waldstein commissioned young Beethoven to write an evening's musical entertainment, a Knight’s Ballet.  Waldstein had the ballet performed at his Bonn palace during Mardi Gras, attributing the music to himself.

At the same time, Waldstein was one of the first to recognize Beethoven's genius, and he took steps to secure Beethoven employment as a court musician and saw to it that he received some discreet financial aid.

But the darker side of Waldstein's personality--his impetuousness, his susceptibility to get-rich-quick schemes, and his recklessness put him on a collision course with disaster.  And when years of war undermined the financial stability of Europe, the finances of the aristocracy shook with it.

By 1818 Waldstein had sunk deeply into debt.  He was entitled to substantial benefits, but by the time he died in 1823 he was so poor that his estate couldn't pay his doctors' bills and a friend had to pay for his funeral.

By then Beethoven and Waldstein had long since gone their separate ways.  But Beethoven wasn't the only artist Waldstein had taken under his wing. Back in 1785 he had hired an aging Italian adventurer as his librarian.  The librarian had used his years of tranquility to write torrid memoirs that had turned a librarian’s name into a household word-- Casanova.