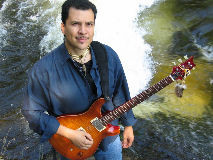 Wade Fernandez grew up on a Menomonie reservation surrounded on all sides by forest. There he would walk for hours, absorbing the sounds of nature all around him, an atmosphere which infuses Fernandez’s music.

Traditional forms of tribal music, performed at pow-wows and ceremonies, were a big part of his musical upbringing. Afterwards people would gather together for "49" parties. Fernandez says the number 49 comes from an old song, sung for 49 warriors that were killed.

"Folks would just pound on the hood of a car like a drum, singing in English and traditional vocalizations. All that would come floating through my bedroom window as a kid."

Add to this mix a family record collection that introduced Fernandez to Johnny Cash, Otis Redding, and the Stones, and perhaps you can begin to see where this performer got his unique and captivating style.
Latest CD:"Song of the Black Wolf" (2004 Wade Fernandez)