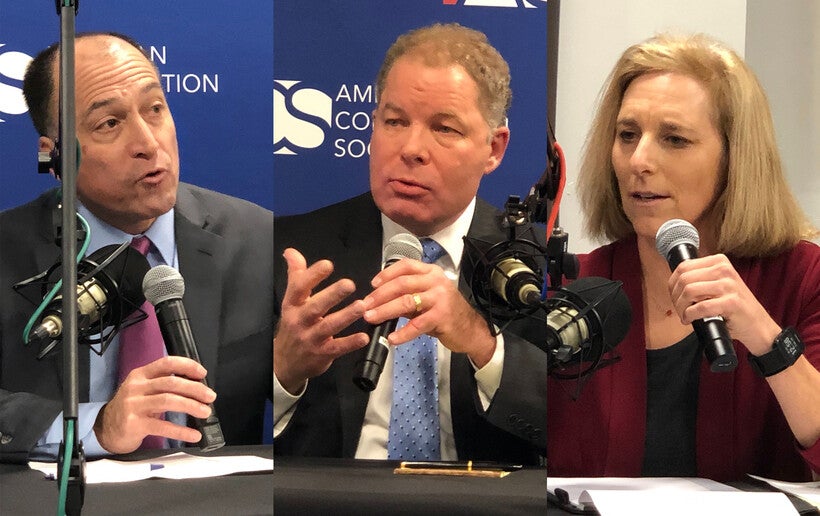 Top 2 Finalists From February Primary To Face Off In April General Election
By Rich Kremer
Share:

Wisconsin voters will winnow the field of candidates running for the state's highest court Tuesday. In a race that is officially nonpartisan, all three candidates have accused each other of injecting politics into their judicial philosophies.

Three candidates are vying in the Wisconsin Supreme Court primary election. Justice Daniel Kelly, who was appointed to the bench by former Republican Gov. Scott Walker in 2016, faces off against Dane County Circuit Judge Jill Karofsky and Marquette University Law School professor Ed Fallone. The two candidates with the highest vote tally will move on to the April 7 general election.

Though candidates running for the state's supreme court do not run as Democrats or Republicans, Kelly is backed by the Wisconsin GOP while Fallone and Karofsky have been supported by Democrats.

During recent appearances on WPR's "The Morning Show," Fallone and Karofsky accused Kelly of letting politics influence his decisions during his last three years on the state's high court.

Karofsky pointed to specific examples including Kelly's vote in 2019 that helped overturn a state Supreme Court precedent from 2016 relating to whether rules created by the Wisconsin Department of Public Instruction are subject to review by lawmakers and the governor. In 2016, the court ruled the agency rules were not subject to legislative approval, while in 2019, the court, with Kelly on the bench, reversed the decision.

"If laws in Wisconsin, if case law in Wisconsin changes only because of the makeup of the Supreme Court, how do any of us know what the law is supposed to be in this state?" asked Karofsky. "What we see is a court that is outcome-driven and that is not following the rule of law because they want to get to their preordained result."

Fallone also attacked Kelly on "The Morning Show" stating the incumbent has only represented a narrow range of clients during his career as an attorney. Fallone said Kelly has "tended to represent political parties, political candidates, politically connected individuals."

"I believe that his appointment is more a reflection of his loyalty to partisan, political parties than it is to his breadth of experience," said Fallone.

Fallone said what distinguishes him from his primary challengers is his experience working on nonprofit efforts to make state courts more accessible to immigrants and people from low-income families.

"I'm also someone who has real concern for our working families in the justice system," said Fallone. "And I've devoted a substantial part of my career trying to make the justice system work better from the nonprofit sector, and I think I can do more from a seat on the court."

Kelly separated himself from his challengers during his appearance on "The Morning Show" by describing himself as a textual originalist when it comes to the U.S. Constitution.

Kelly said Karofsky and Fallone treat the Constitution as a "living document."