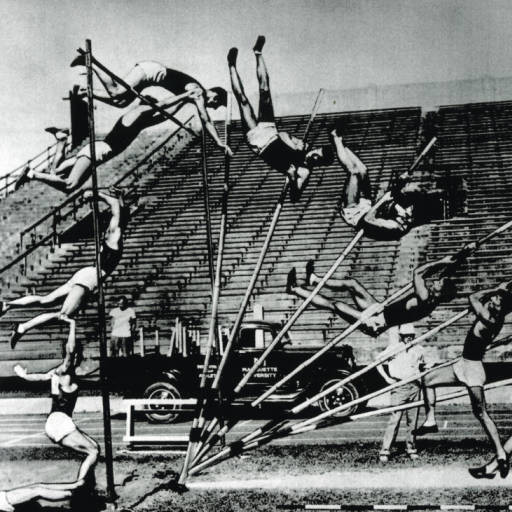 In this composite photo, Frank Glaser vaults over the bar. Glaser was a three-time All-American in the pole vault during his time at Marquette University. He also played basketball and ran track, but pole vaulting was his specialty.

This photo from the mid-1920s required more than a dozen unique images of Glaser in motion.

Composite photos are made by cutting images from separate photos and pasting them together. They served practical as well as artistic purposes. Early photography required people to sit for relatively long periods of time, which made it difficult to assemble large groups of people and keep them still long enough for the photo to turn out. Composite photos allowed photographers to overcome the technological limitations.

As photography advanced, composites became more of an artistic choice. They were particularly popular in the years after World War I.

Pole vaulting has been a competitive sport since the 1840s, and was one of the field events selected for the first modern Olympics in Athens in 1896. The first vaulting poles were made from stiff materials like the aluminum one used by Glaser. More flexible poles weren’t introduced until the 1950s.