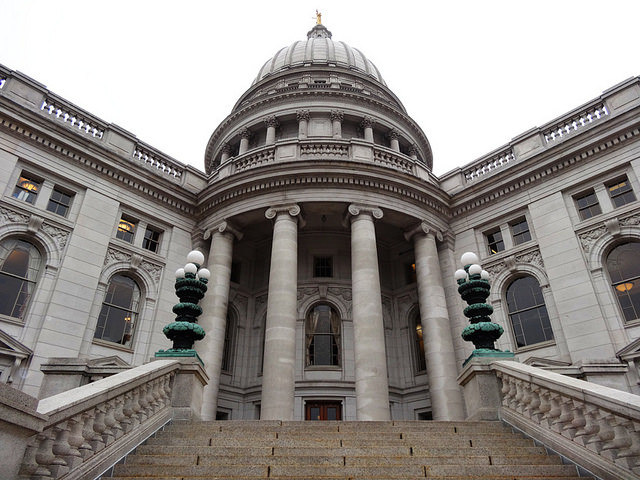 Veterans are calling on Gov. Scott Walker and GOP lawmakers to abandon their proposals to repeal prevailing wage laws in Wisconsin.

Wisconsin American Legion representatives said Wednesday veteran jobs could be lost if state lawmakers move ahead with repealing the prevailing wage. The group says a large number of veterans work in construction after returning from service.

During the last legislative session, lawmakers removed prevailing wage, which sets minimum salaries for workers, on local construction projects. Now they want to end the prevailing wage for state projects.

"Why is it that always the budget is balanced on the backs of veterans," said Daniel Seehafer, department commander with the Wisconsin American Legion.

Seehafer and his colleagues cited a 2016 Midwest Economic Policy Institute study that contends 2,000 veteran jobs would be lost if the wage repeal becomes law.

"When we come back from our tour of duty and combat, we don't want to fight here," said Leroy Miller, an Army veteran who works in construction.

More than a dozen veterans gathered for a press conference Wednesday in the state Capitol.

The governor included the prevailing wage repeal in his state budget proposal. He claims the change would save taxpayer money on construction projects.

"This reform is expected to increase efficiencies and reduce costs on taxpayer-funded projects," said Walker's spokesman Tom Evenson. "Reducing costs will allow the state to continue investing in projects and programs that will create jobs for all workers, including our veterans."

Members of the veterans’ organization said they hope the governor will reconsider.

"I just know from my experience dealing with the governor that he has traditionally come on the right side of Wisconsin veterans," said David Kurtz, adjutant at the Wisconsin American Legion. "We're hopeful when he looks at the situation in its whole total that veterans will have a friend in Gov. Walker."

The state budget will be debated in the coming months at the Capitol. It is scheduled to be complete by June 30.