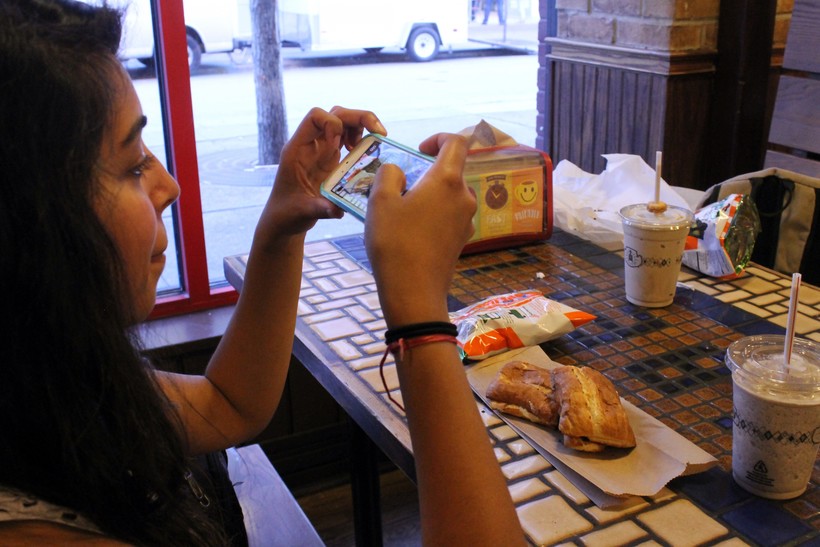 Research Indicates 4 Out Of 5 College Students Use App
By Parth Shah
Share:

Herds of students bustle through University of Wisconsin-Madison's campus during class change. Some walk with headphones plugged into their ears, others zip through walkways on their bicycles — and every so often, a student stops in their tracks, raises their phone to face level, and takes a selfie.

"Yeah, I take selfies while I walk," she said. "It feels awkward at first but then I think, well, everyone else does it, so it doesn't really matter."

Redkar takes her selfies on Snapchat, a popular photo and video messaging app. And just like with selfies, she's not alone in doing so — more than 100 million people use the app, many of whom are found on university campuses like UW-Madison. In fact, according to one study by the marketing company Sumpto, 4 out of 5 college students are using Snapchat.

The general concept behind the app is simple: Take a photo or video and send it to your friends. Once they open the "snap," they'll have up to 10 seconds to see it before the image or video disappears.

Snapchat was released back in 2011. Redkar said she downloaded it during her freshman year.

"I thought it was really stupid because I just didn't see the point in sending people pictures and them going away," Redkar said. "I just thought texting was easier."

But she said she had a change of heart when Snapchat launched its Story feature.

"If you just want to in general share a picture or moment, you just put it on your story," Redkar said. "Anyone who is following you or your friends can look at it, and they have 24 hours to look at it."

According to the Pew Research Center, young adults like Redkar make up the vast majority of social media users. Ninety percent of Millennials are active on platforms like Facebook or Instagram. However, Redkar thinks Snapchat is different.

"If you go to Facebook or Instagram and you post something, a lot of people want others to like it," she said. "The more likes you have, the better you feel. Snapchat is one of those things where it's like, 'Hey how's it going,' and it's gone. After that, no one needs to like it or anything."

Facebook still has the most active users of any social networking platform globally, but it saw a 10 percent dip in usage last year. Snapchat, on the other hand, had the largest growth of any social media app.

"You don't have to worry about saying less-than-desirable things or things you wish you could take back," said Toma.

Redkar agrees. Before Snapchat, pictures were used only to reminisce and get likes. Now, she sends them freely as a form of communication — mostly with people her own age. Less than one-third of the app's users are over the age of 30.

One of the reasons Snapchat had been attractive to Redkar is that her parents didn't have it. But somewhat reluctantly, Redkar agreed to get her mom Rashmi to use Snapchat.

Mama Redkar uses Facebook and Whatsapp a lot to stay in touch with family and friends. But she doesn't see Snapchat as a tool for keeping up with her entire social network. For her, it's all about getting an extra set of eyes on her daughter.

"I know where she is and what is she doing," said Mrs. Redkar. "It's kind of a good parental control."

Despite the surveillance, Redkar said it's not so bad snapping her mom. But it gets her thinking about the future of the app.

"Parents joined Facebook, so now it's their thing — and now we have Snapchat," she said.

Redkar wonders how long before Snapchat becomes a parent thing too.