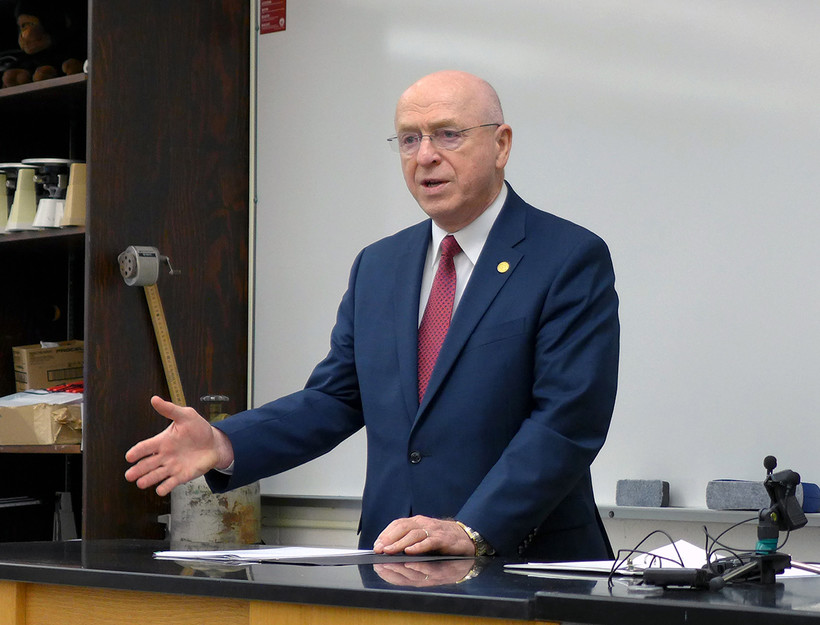 University of Wisconsin System President Ray Cross has announced his retirement as head of the state’s colleges and universities. Cross said he’ll stay on until a new UW president is chosen by the Board of Regents.

Cross said he's retiring to spend more time with his wife and family and "do some things that are more relaxing."

Cross expressed confidence about the strength of the UW System and its leadership.

"I feel like the university is in a solid position," Cross said. "I think we have a solid board. The challenges facing us are significant, but I have a lot of confidence in the people that are a part of the university and their ability to deal with those."

On Friday, Gov. Tony Evers, who worked with Cross as a former member of the UW Board of Regents, released a statement praising Cross and his commitment to education.

"I want to thank Ray for his five years of leadership and service as president of our UW System," Evers said. "The UW has been in good hands under his leadership, especially during a time when higher education in our state faced significant cuts and challenges and a difficult political environment."

Assembly Speaker Robin Vos, R-Rochester, also applauded Cross' tenure as a UW System leader. In a statement, he thanked cross for "outstanding leadership" and innovative "strategic management" of the system.

"Ray has left a rock-solid foundation for future system leaders to meet the challenges and opportunities of bringing a world-class education to every Wisconsin student," said Vos. "I appreciate his efforts to ensure free speech is protected on college campuses in our state."

Cross is the seventh president of the UW System. He was appointed by the Board of Regents in February 2014. Prior to that, Cross served as chancellor of the former UW Colleges and Extension from 2011 to 2014.

Cross has also served as president of Morrisville State College in New York and Northwest Technical College in Minnesota, and was a professor and department head at Ferris State University in Michigan.

Prior to his time in academia, Cross was a small business owner, engineer and served with the U.S. Army during the Vietnam War.

When asked about the legacy of his seven years of leadership within the state’s university and college system, Cross said relationships between the UW and state lawmakers have improved partly because the system is now more open and transparent about its finances than it has been in the past. Cross also said UW has worked to better address sexual assault and sexual harassment on campuses and has improved diversity and inclusion efforts.

"I also think that work we’ve done to develop a strategic framework around the educational pipeline around improving the university experience, around operational excellence and of course engaging more effectively with businesses in our communities," said Cross. "Those four pillars remain, and they will remain a long time. And I think that we’ve made progress on that."

In 2017, Cross announced the largest restructuring plan for the UW System since its creation. It merged the state's two-year colleges with its four-year universities. As a result, the division formerly known as UW Colleges and Extension was eliminated — with services, including WPR, moving to new homes within the UW System.

Cross made the case that restructuring was necessary to address projected declines in the number of Wisconsin high school graduates.

"We knew this was going to be incredibly difficult for the two-year campuses given the demographic challenges of the communities in which they exist," said Cross. "So, preparing for that, trying to get ahead of that has been important."

According to data from the UW System, 2019 fall enrollment at the state's two-year campuses declined by an average of 25 percent from the year before. UW-Platteville Richland had a 58 percent drop in enrollment this year compared with fall of 2018.

The bill died in the state Senate, but was introduced by regents soon after. The policy has drawn condemnation from student groups along with liberal and conservative organizations because it mandates suspension and expulsion for students who repeatedly disrupt free speech in reserved rooms on campus. Regents are currently going through the state administrative rulemaking process to include the punishments in administrative code.

Cross said existing UW policies already allow for sanctions against students who repeatedly disrupt events. But he said despite the mandatory sanctions under the new policy there will still be discretion.

"So, in some sense, this is a more mechanical way of trying to deal with that," Cross said. "But it still remains the judgment of the university police and or the chancellor or the administrative folks on that campus."

Early in Cross' tenure as UW System president, state lawmakers balked at fund balances kept by UW campuses. Tuition fund balances were described by some Republicans as university "slush funds" kept at the same time the Board of Regents was approving annual 5.5 percent increases in tuition.

Cross said he and other UW leaders have worked hard to explain fund balances and how much of the money held in reserve has been dedicated to things like building and renovation projects. Since 2013, the UW System’s tuition fund balance has been cut by more than half. At the same time, tuition has been frozen throughout the system. During the Board of Regents July 2019 meeting, budget documents showed UW-Stevens Point projected it would have zero tuition fund balances.

"I would also argue that we are now getting to a point where those fund balances are dangerously low in some cases," Cross said. "So, that’s incredibly important that we maintain at least the appropriate balances because that impacts our accreditation among other things."

Cross said a continual challenge for the UW System is the need for investment. Cross and Board of Regents President Drew Petersen have been touring the state as part of the All In Wisconsin initiative. The goal is to highlight UW’s strengths and the role it plays in helping drive the state’s economy.

"The university needs to be invested in some fashion in order to retain quality or improve our quality," said Cross. "Whether that comes from tuition or increased state investment or other sources, it’s probably irrelevant. We are worthy of an investment and that’s important if we’re going to retain quality and advance those kinds of things."

But Cross said the greatest challenge before UW is changing demographics of Wisconsin and the declining numbers of college-aged students. He said managing campus operations to respond to the trends will be an ongoing effort.

Editor's note: This story has been updated to include a comment from Gov. Tony Evers and Assembly Speaker Robin Vos.