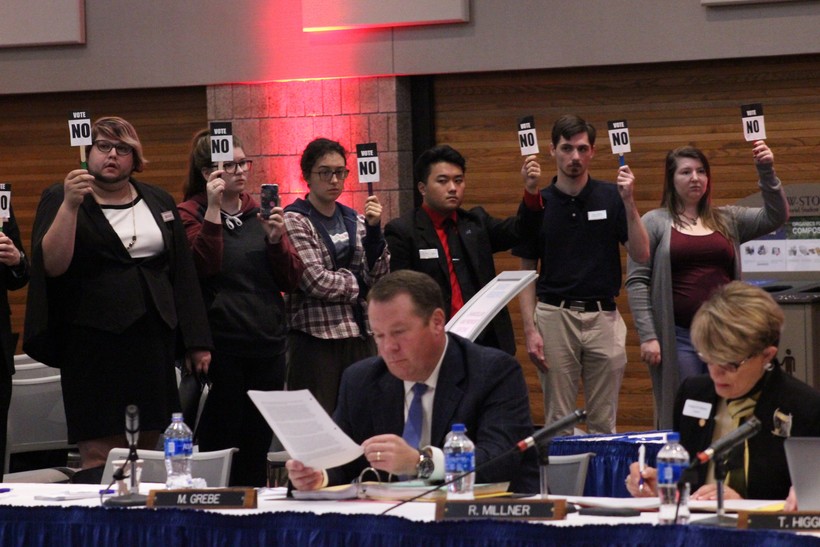 The University of Wisconsin Board of Regents has approved a resolution that allows for the expulsion of students who repeatedly disrupt freedom of speech or freedom of expression on campus.

Under the new rules, chancellors will have the authority to punish students who have engaged in "violent or other disorderly misconduct that materially and substantially disrupted the free expression of others." After two incidents a student is subject to suspension from the university. A third offense would lead to expulsion. The resolution closely mirrors a bill introduced by Republican State Rep. Jesse Kremer, R-Kewaskum, in May.

The measures are in response to incidents at places like the University of California, Berkeley where earlier this year riots broke out after former Breitbart News editor Milo Yiannopoulos was invited to speak on campus. UW-Regent Regina Millner spoke in favor of establishing sanctions for students that try to use intimidation to suppress ideas they disagree with.

"This is something that we have observed, not simply in this state, and there have been incidences where this has happened in this state, but it is happening across the country and part of our responsibility as a governance group is to anticipate what’s happening and to take action in advance," said Millner. "I don’t consider drowning out another speaker as freedom of speech. I am a strong supporter of freedom of speech but that doesn't qualify."

Regent Tony Evers, who sits on the board because of his role as state superintendent of schools, cast the only vote in opposition to the resolution, arguing that it would suppress free speech rather than protect it.

"I believe this policy will chill and suppress free speech on this campus by all campuses," said Evers, who is also running as a Democrat against Republican Gov. Scott Walker in next year’s gubernatorial election.

As regents debated the freedom of expression resolution close to 20 students from UW-Stout stood from their chairs holding signs that said "Vote No." Among them was senior Derek Brown who worried that punishing students who oppose extreme rhetoric could actually draw purveyors of hate speech to UW campuses.

"I think that the approval of this policy could potentially be used as a vehicle if not a flagrant invitation to groups and individuals that have harmful speech to the UW-System and I thought it was very unfortunate to see it passed," said Brown.

During the silent protest UW-Stout senior Josh Bergman held up a sign urging regents to approve sanctions on students who disrupt the freedom of expression of others. He said conservative ideas and those who support them face discrimination at universities. And while there haven’t been any recent riots at Wisconsin campuses Bergman said that former Breitbart News editor Ben Shapiro faced hostility in Wisconsin similar to what happened at Berkeley.

"This happened to the exact same speaker at UW-Madison within the last year where students were inside when he was trying to give a speech and shouting him down and the police could not do anything because they were told that if they shut down the protesters that they would have to shut down the entire event, which is completely ridiculous," said Bergman.

UW Board of Regents, Thursday, also passed a measure streamlining the hiring of system leadership at their October meeting.