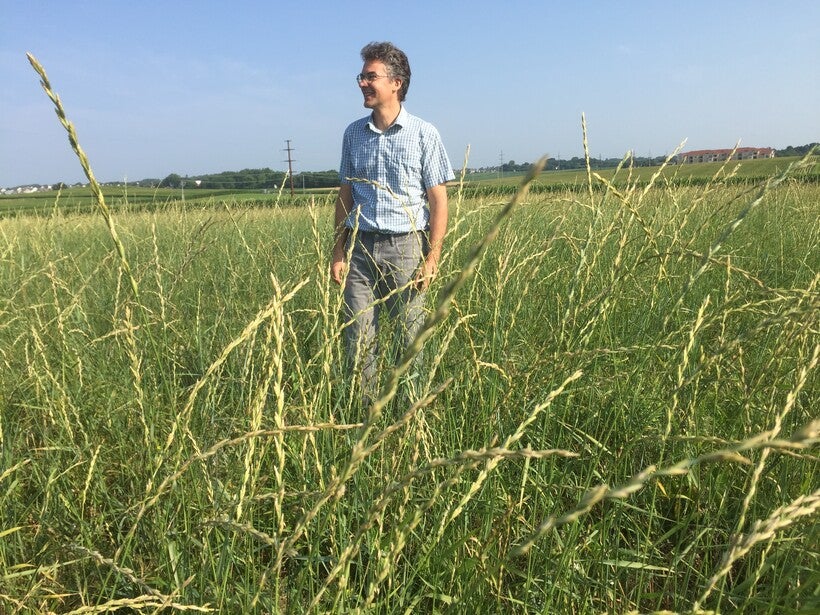 Valentin Picasso, associate professor in the UW–Madison Department of Agronomy, standing in a field of KernzaⓇ, a perennial grain crop. Photo courtesy of Picasso.

While environmental benefits of the forages are clear, scientists say economic, social barriers have stymied wider use by farmers
By Hope Kirwan
Share:

Valentin Picasso, an agronomist at the University of Wisconsin-Madison, said researchers in his field have known for a long time that planting perennial crops in farm fields has a long list of environmental benefits.

The plants’ year-round presence protects the soil from erosion and helps absorb nutrients that would otherwise runoff into lakes and rivers. The forages, which are used for livestock feed, also create an environment for increased biodiversity and can even help fix carbon into the soil, mediating the effects of climate change.

"We’ve shown, in looking at long term research here in Wisconsin, that the more diversity we have in a cropping system, the more resilient it is to weather extremes like drought. And we’ve also shown that the more perennials in the system, we have more stability in production," Picasso said.

But for all of these environmental perks, perennial forages are only used on a small percentage of farm fields in Wisconsin and across the U.S.

Picasso and a team of researchers from 22 universities are hoping a new five-year study will help parse out the social, economic and policy barriers that are keeping farmers from using these crops more.

The project was recently awarded a $10 million grant from the U.S. Department of Agriculture's National Institute of Food and Agriculture.

"We have a really large transdisciplinary team of agronomists, forage scientists and livestock scientists, soil scientists, with economists, sociologists, people from the policy area," Picasso said.

Andrew Stevens is an assistant professor of agricultural and applied economics at UW-Madison who is also working on the team. He said the diverse mix of backgrounds is key to helping the group understand the different pressures that influence farmers' crop decisions in a way that hasn’t been done in previous research.

"We know agronomically there are a lot of benefits to perennial grasses and forage-based systems, but it's not so clear that those are always economically optimal for a farmer or even efficient from a societal perspective," Stevens said. "I'm really interested in understanding where and when these more diversified systems are likely a good idea and sustainable both environmentally and economically."

One hurdle faced by farmers that researchers already know will come up is the economic choice between planting the highest-earning crop versus the most sustainable one.

"A lot of the benefits that the perennial forages provide, they don't have an economic value directly for the farmer. They are very important for society, but they are not paid to the farmer," Picasso said.

Stevens said the group hopes hearing from farmers themselves as well as policymakers involved in creating the next federal farm bill will help make sure the research has real-world applications.

He said Wisconsin is the perfect home for the study because of the long history of agriculture and the mix of production systems.

"We’re in an interesting spot in the country, where we’re sort of corn belt-adjacent but a lot of our agriculture is obviously dairy or specialty crops with cranberries or potatoes," Stevens said. "There are a lot of different models of agriculture here, so it's this natural laboratory of different ways to do agriculture."

The project will support 50 pairs of farmers across the country, with one producer who is already using perennial forages and another who is interested in adopting the crop. The team also hopes to produce educational materials for farmers and university and K-12 classrooms.

"This project is about long-term transformation of the landscape toward more sustainable systems," Picasso said. "And that requires not only research and outreach for farmers, but it also requires increasing awareness in society about where our food is coming from, what are the environmental impacts of the way we produce food, what are the benefits that different cropping systems or management systems may have for everyone, not only for providing healthy food but for human health in general."