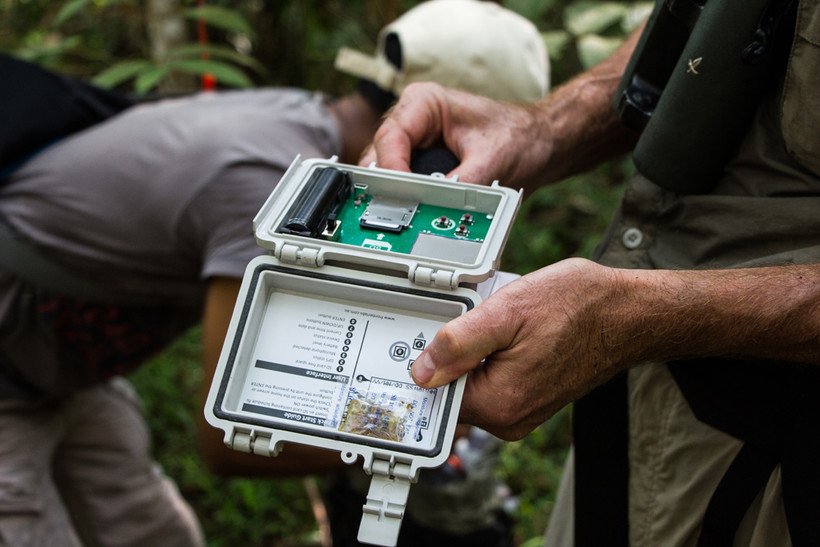 Researchers use recording devices to track the sounds of the rainforest. Photo courtesy of Justine Hausheer/The Nature Conservancy

Imagine the loudest sound you can muster. That, says University of Wisconsin-Madison researcher Zuzana Burivalova, is what a rainforest sounds like.

"It's mostly insects most times of the day, and if you're lucky and you are in the rainforest early in the morning or just as the sun sets, you start hearing other things — different other types of primates, lots of birds," she said. "It's basically a cacophony of sounds."

Those sounds have become meaningful to researchers studying the health of the rainforests as deforestation in particular has displaced countless species and has left the backdrop measurably quieter. That's hard to tell from, for example, a satellite, which doesn't have the capacity to show much beyond whether a forest has been decimated.

"We can use bioacoustics almost as a stethoscope," said Burivalova, an assistant professor of forest and wildlife ecology at UW-Madison. "We can try to listen to the vital signs of the forest and realize is the forest maybe recovering after human presence or human exploitation or is it getting even worse?"

A team of researchers comprised of Burivalova and collaborators in Indonesia and Gabon, as well as collaborators at The Nature Conservancy, have been studying the sounds of the rainforests in Gabon, Borneo and Papua New Guinea for about the past five years to examine their vivacity. Rainforests in these locations were chosen specifically because they're some of the most diverse and the most threatened.

Burivalova is hopeful this research can inform adaptations to the ways these forests are mined. She said she'd love to eventually make buyers aware of where their wood is coming from, what kinds of animals are disrupted by these logging practices, and what their recoveries look and sound like.

Sounds are of particular importance to researchers in the rainforest because it's one of the most reliable things to measure. Eyesight isn't as dependable here, because rainforests are darkened by the canopy of trees. Additionally, many animals stay hidden to avoid predators.

But they talk. They communicate about food, they let each other know about something dangerous, and they attract mates.

"As scientists we can use these sounds that animals are making to really start understanding if the animals are there for survival and to start learning about the forest as a whole," Burivalova said. That includes learning what kinds of species are there, how many different species there are, and whether any invasive species have taken up residence.

Burivalova, who conducts her research as director of the Sound Forest Lab at UW-Madison's Nelson Institute, said scientists do this by first setting up recording devices in strategic areas of the rainforest. She said measuring sounds for a full 24 hours is important, particularly because some animals are much more vocal at different times of the day.

"The most important thing is that I myself leave so the animals don't feel disturbed by a human encroaching into their habitat," she said.

Sometimes the recorders are left out for a full day. Other times, they'll collect data for a full year, depending on the question the researchers are trying to answer. Once all the data is collected, Burivalova runs algorithms on the data.

"Those algorithms can help us get kind of a broad picture," she said.

The data isn't sophisticated enough yet to be able to parse out the sound waves from particular species, in part because some of those species are still unknown, or there's no audio in a database for the computer to compare it to.

It's not necessarily that the design is new — scientists have been recording data for years. But now, advancements with long-lasting batteries, small recording devices and huge data stores make collecting, sifting through and examining the data much more workable.

UW Researcher Using Sound To Measure Biodiversity In The Rainforest 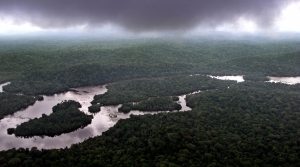 The field of bioacoustics uses sound recordings to measure how busy rain forests are with animal life. We talk with a UW researcher about how it works, and the trends she's seeing in areas where human activity is disrupting the ecosystem.