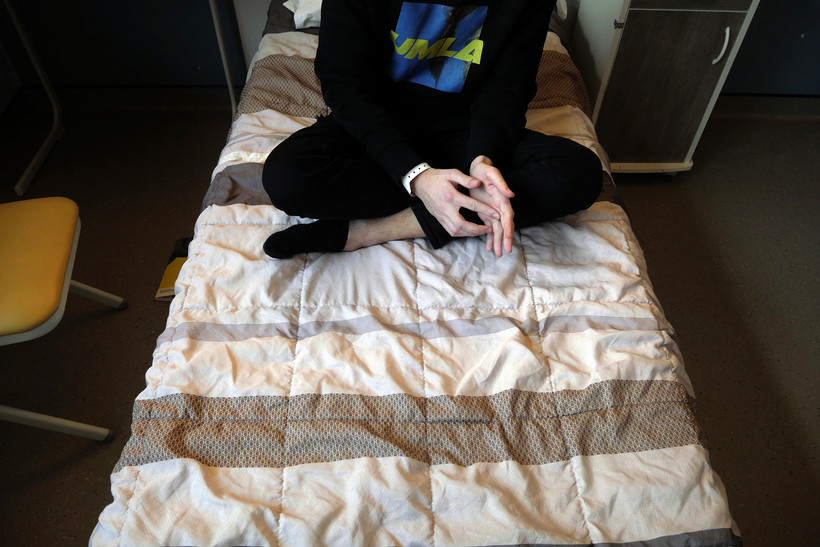 Nathan, a 22-year-old student, talks with psychiatrist Olivier Guillin, at the Rouvray psychiatric hospital, in Rouen, western France, Wednesday, Nov. 25, 2020. Lockdowns that France has used to fight the coronavirus have come at considerable cost to mental health. Surveying points to a surge of depression most acute among people without work, in financial hardship and young adults. Thibault Camus/AP Photo

Officials at UW Health are reporting a "dramatic increase" in the number of adolescents coming to the emergency room for attempted suicide or suicidal ideation.

In 2022, UW Health’s pediatric emergency department saw more than 40 patients per month who required psychiatric care. That's almost three times the number seen a decade earlier, according to a press release. The greatest increase in cases has been due to suicidal ideation and drug or alcohol intoxication or overdose.

Shanda Wells, pediatric behavioral health specialist at UW Health, said not only are more kids coming in for help, but those that do have more symptoms of severe anxiety and depression than she's seen in the past. And Wells said the situation is starting to feel desperate for those working in health care.

"There aren't that many clinicians like myself who have the specialized kind of training needed in order to see children," she said. "So there just really aren't as many of us as there needs to be right now for the amount of kids who need help."

Wells said the situation is even more challenging because of record high numbers of kids who need care for respiratory illnesses like RSV and influenza. She said pediatric ERs across the country are full because of both issues.

She said many of the patients who are struggling with suicide are in their teens, but younger teens and preteens are also starting to be more severely affected.

UW Health reported that children younger than 14 years old had the highest increase in psychiatric visits in the last four years, while kids 14- to 17- years old have presented at a consistently high rate since 2018.

"Some kids absolutely struggle with this long term," Wells said. "But I think just because of the sheer numbers, we're seeing plenty of folks too who maybe this is new. Like maybe families didn't know that their child was feeling depressed or anxious."

Wells said the spike in mental health needs started during the COVID-19 pandemic. But she said providers are starting to question whether the rise in cases will subside now that life has largely returned to normal.

"We were hoping that that moment would have started to pass given that things kind of seemed to be springboarded by the pandemic, and they have not changed. So I think it's hard to tell right now," she said.

Carla Lundeen is director of Great Rivers 211, a crisis support and referral service based in La Crosse. She agrees that it's hard to know whether the current trend will continue, but she thinks the situation won't improve on its own.

"I think we have the right to be worried about this and I think it's time that we start taking some action," Lundeen said.

Lundeen said Great Rivers 211 doesn't require callers to provide demographic information, so it's hard to track trends on who is reaching out for services. But she said in general, their service has seen more calls from younger kids and the calls are more serious in nature.

"We recently had a 12 year old reach out to us. They felt like they were drinking too much alcohol, and they didn't know what to do," she said. "That's just really kind of shocking to hear that from a 12 year old."

She said kids are dealing with real mental health issues, and they need access to professionals who can diagnose and provide treatment for them.

Wells said part of the problem is that there are not enough therapists and clinicians who are trained to care for children.

"There's always been a much smaller number of clinicians that graduate with a specialty in pediatrics than there have been for general adult psychology, psychiatry, therapy, things like that," she said. "But we're not going to see the repercussions of that even if we do (invest in training) today."

Wells said the health care industry needs to get creative in how they're connecting kids to mental health services. She leads a program at UW Health that brings behavioral health professionals into primary care offices if there's a concern about a child's mental health. Over the last few years since it's inception, Wells said her clinicians have been seeing 300 to 350 kids every year — almost double what they expected.

Reports of anxiety, depression and suicide are increasing among Wisconsin's youth. That's according to a new annual report from the state's Office of Children's Mental Health.