Water is a hot-button issue. From an increasing population to aging infrastructure and climate change, its scope is enormous.

Earlier this year Gov. Tony Evers called 2019 the "Year of Clean Drinking Water" and announced $70 million for water quality programs — which some say is a good step, but not nearly enough.

An aging workforce and a shortage of trained new talent has left the industry struggling to keep up with the demands for those programs.

A new undergraduate major at the University of Wisconsin-Green Bay is looking to fill that gap and equip students with a comprehensive water science education that meets workforce needs — a move that has received local industry support.

UW-Green Bay’s water science degree is the intersection of the science and policy of water, said John Luczaj, geoscience professor in UW-Green Bay’s Department of Natural and Applied Sciences.

It’s also the first of its kind in the UW System, he said, though a few other programs around the state touch on the topic.

"There's no one particular field called water science that the U.S. Department of Labor classifies," said Luczaj, who is coordinating the degree. "But what we see is that water touches nearly every field of science and technology and public policy."

Students will begin the degree with courses heavy in the sciences, including chemistry, biology, mathematics, physics and geoscience, he said. Then, students will move onto core water classes ranging from hydrology and surface water to groundwater and courses in policy.

"It's a degree that will give our students something new, that they can package together and go out in the working world and focus on water problems," he said.

Geographically, UW-Green Bay is positioned well for water studies with the bay of Green Bay and Lake Michigan in its backyard, along with groundwater issues related to nitrates, bacteria and viruses in the karst areas of eastern Wisconsin, Luczaj said.

"Nutrient runoff problems with nitrogen and phosphorus in the bay of Green Bay that produce cyanobacterial blooms and cause a hypoxic zone or a dead zone in the bottom of Green Bay — these are all big challenges that are going to continue for some point in the future," he said.

The undergraduate degree will start in fall 2019. 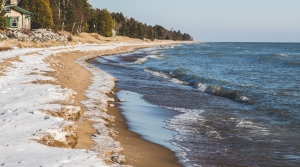 As the world continues to deal with an increasing amount of water quality and quantity issues, there’s a growing demand for workers with a water science background. We hear about one Wisconsin university’s new effort to try and meet that demand.