Gov. Tony Evers announced earlier this month that Wisconsin would join the U.S. Climate Alliance, along with 21 other governors, working to cut greenhouse gas emission targets set by the Paris Climate Agreement over the next six years.

While specifics on Evers' plans for environmental and energy policy isn't yet clear, more details will be released after his budget address on Thursday night.

Kate Archer Kent: What can these 21 governors do to meet these emission targets and to override some of these other things that are coming up against the Paris agreement?

Dave Strifling: It's very important symbolically. But I think the details are vague as yet to how the governor proposes to actually meet those goals. It will be interesting to see what he says in the budget address tonight.

In the case of a governor like Evers who is in a state with divided government he does have certain powers ... he certainly has control over the budget to the extent that the Legislature goes along with that. But in terms of actual enforceable emissions cuts, it's going to be a bit of an uphill struggle because I don't think the Republicans in the Assembly and the Senate will go along with that.

KAK: Evers has said he's really concerned about climate change, what might it look like here in Wisconsin as we look at what options are on the table for greener energy sources?

DS: I think he's right. I think if it does happen, a lot of it will be in the form of wind. Wisconsin is well situated for that. Obviously, we're not Arizona, so the impact of solar is a little bit less here than what it could be in other parts of the country.

But I think what you'll see is decisions by utilities to retire aging coal-fired power plants, like the Pleasant Prairie plant in Kenosha County that We Energies just retired. And instead to invest in some of these more renewable forms of energy. Exactly how that plays out, whether it's a shift to natural gas or it's going all the way to wind and solar, it's difficult to predict. But I would be very surprised if we see any more coal-fired power plants being built in Wisconsin.

KAK: Gov. Evers declared this year the year of clean drinking water in Wisconsin. He called for state agencies to be allowed to borrow nearly $70 million. Is that adequate for the scope of the water issues here in Wisconsin?

DS: No, it's not, but it certainly is a great first step.

We're talking about a number of different things. One is the replacement of lead laterals in aging cities. Of course, there's no safe level of lead in the bloodstream and our water utilities are doing their best to try to make sure that lead doesn't flake off the inside of the pipes. They're adding a corrosion control to our water supplies to make sure that doesn't happen.

But it's a risk. It’s a risk that we've got to face. We've got about 175,000 of them in Wisconsin, 75,000 of those are in Milwaukee and we're looking at costs up to $1 billion or more to replace them. And that's just scratching the surface in terms of our broader difficulties with aging water infrastructure that has to be replaced.

KAK: There looks like there will be political changes to environmental policy in how the (state Department of Natural Resources) is operating. What is the significance of naming Preston Cole as the new DNR secretary?

DS: It's a great choice. Under the Walker administration, we had heard reports of certainly staff reductions and falling morale among staff. And I don't mean to malign the DNR here, there are a lot of good people doing good work at the DNR, but I think this has the potential to revitalize the agency.

But more significantly, it also has the potential to lead to bigger budgets for the agency and perhaps more enforcement. And so when we look at how the environmental climate in the state might change, I don't foresee any major changes to the laws that govern us, but in terms of the funding levels at the DNR and the enforcement cases that it pursues ... I think that's where you're going to see the major impacts in a new administration. 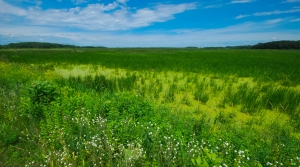 Governor Evers announced earlier this month that Wisconsin would be joining the U.S. Climate Alliance. We take a look at how environmental policy could change under the new governor.