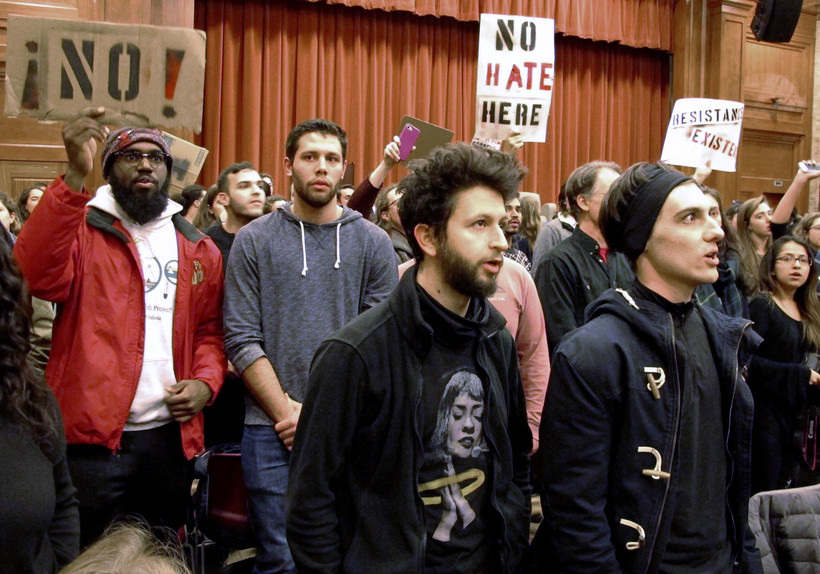 Middlebury College students turn their backs to Charles Murray, unseen, during his lecture in Middlebury, Vt on March 2, 2017. Hundreds of students protested his lecture, forcing the college to move his talk to an undisclosed campus location from which it was live-streamed to the original venue. Lisa Rathke/AP Photo

Policy Changes Would Allow Students To Be Suspended, Expelled If They Disrupt Free Speech Multiple Times
By Rich Kremer
Share:

Editor's note: This story includes language some may find offensive. The title of a talk mentioned in the story has been censored for that reason.

The University of Wisconsin Board of Regents are poised to approve draft rules Friday that would mandate suspension for students who disrupt the free speech rights of students or invited speakers on two occasions. The rule would require expulsion if a student is found to violate the policy on three occasions.

The proposal has received opposition by both conservative and liberal leaning organizations, and of all the public comments the UW System received, the only statement of support came from a Michigan woman who said it would protect conservatives and Christians on campus.

In 2017, regents approved a resolution that would give chancellors new authority to punish students who engage in "violent or other disorderly misconduct that materially and substantially" disrupt the free expression of others. The policy change closely mirrored a bill introduced by Republican state lawmakers five months before. Currently such punishments are optional. Friday's vote by the board would set mandatory sanctions.

The policy was introduced in reaction to incidents of conservative speakers being targeted by protesters on campuses across the nation. In one incident a speech planned by controversial conservative speaker Milo Yiannopoulos at the University of California, Berkley led to violent protests.

In December of 2016, Yiannopoulos was invited to speak at UW-Milwaukee by a local chapter of the conservative student group Turning Point USA. During his speech, which was part of Yiannopoulos’s "Dangerous F----- Tour" he singled out a transgender student who had protested a campus policy requiring "non-conforming genitalia be covered at all time," in university locker room facilities.

When regents approved the punishments for those disrupting speakers the next year, former Regent Regina Millner said the policy was aimed at preventing violent confrontations on UW campuses.

"This is something that we have observed, not simply in this state, and there have been incidences where this has happened in this state, but it is happening across the country and part of our responsibility as a governance group is to anticipate what’s happening and to take action in advance," said Millner. "I don’t consider drowning out another speaker as freedom of speech. I am a strong supporter of freedom of speech but that doesn't qualify."

If they vote in favor, the regent's action Friday would approve a scope statement formalizing the freedom of expression policy and punishments that were approved by former Gov. Scott Walker in June of last year.

In August, the UW System held a public hearing to gather comments on the changes. There were nine speakers at the hearing and the Board of Regents received 38 written comments. The only comment in support of the freedom of expression policy change came from a Michigan resident Nancy Suitor whose Facebook profile lists her as a group leader and children’s teacher at the Freedom Assembly of God.

Suitor didn't respond to requests for comment on this story but in her written comment she thanked regents for taking action to protect conservative and religious speakers.

"Conservatives and Christians thank you for protecting those who come to speak and their actually physical lives," wrote Suitor. "Universities are places where all points should have a voice."

Comments in opposition of the proposed punishments for students disrupting campus speakers came from a broad mix of conservative and liberal organizations including the Wisconsin Institute for Law and Liberty and One Wisconsin Now.

The most common concern raised by opponents was a fear that the new free speech policy and mandatory punishments would create a chilling effect on students, including those from racial and ethnic minorities, students with disabilities and the LGBTQ+ community.

Timothy Yu, a professor of English and Asian American studies at UW-Madison, was among those writing in opposition.

"So, what’s disturbing about the policy is that it’s very vague in terms of what it prohibits," Yu said in an interview with WPR. "It says you’re not allowed to disrupt someone else’s free expression. Well, what if I stand up and boo during someone’s talk. What if I argue with them and they get offended and walk off stage. What if I criticize them before they get here and they decide to cancel their visit. In some interpretations of what the policy is all of those things could be punishable under this policy."

A number of commenters also voice concerns about the constitutionality of punishing students who protest speakers with which they disagree.

Milwaukee Attorney Gary Grass noted in his written statement that the UW System has other policies relating to students who disrupt speakers and that the proposed rule doesn’t offer any "analysis of alternatives given as required by state statute." State statute requires that any new agency rule must offer a "description of existing policies relevant to the rule."

In an interview with WPR, Grass said he has represented UW students who faced punishment for protesting on campus under existing policies.

"And this now could expose them to suspension or expulsion pretty rapidly if they persisted and it seems like it’s a draconian solution to just one small part of the problems that they have on campus," said Grass.

If regents approve the changes Friday, it will allow UW System administrators to add the new language to the state’s Administrative Code.