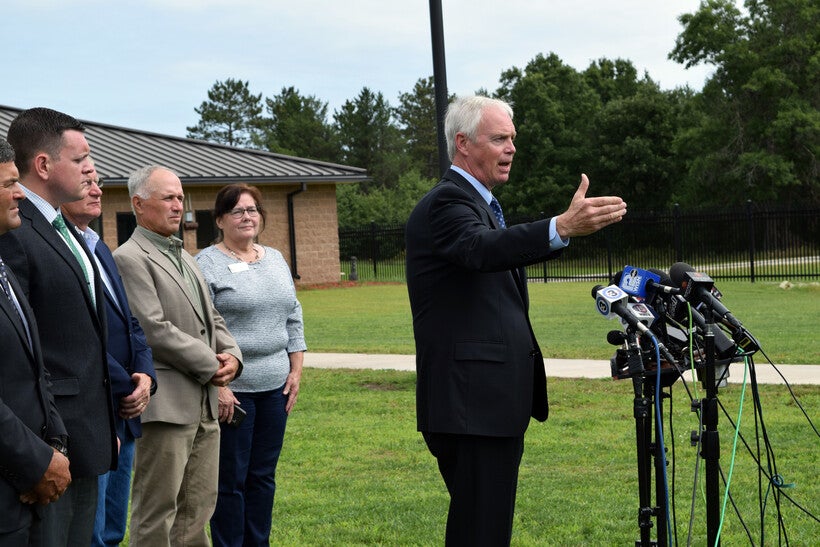 Republican U.S. Sen. Ron Johnson, right, speaks outside the main gate of Fort McCoy in western Wisconsin. On Wednesday, Aug. 26, 2021, Johnson toured Fort McCoy, where Afghan refugees are temporarily living and being supported after their home country fell to the Taliban. Refugees began arriving at the base about 100 miles northwest of Madison on Sunday, Aug. 22, 2021. Few details have been released about how many refugees will be living at the base and what support they are receiving. Hope Kirwan/WPR

The senator from Wisconsin and GOP state lawmakers met with officials at the army base Wednesday to learn more about operations to provide housing and help relocate people fleeing Afghanistan in the wake of the U.S. military withdrawal from the country.

Refugees first arrived Sunday at Fort McCoy, including special immigrant visa applicants, their families and other at-risk individuals, according to a Sunday press release.

During a press conference held outside the base Wednesday, Johnson said around 1,000 Afghans are currently staying at Fort McCoy.

Johnson said the base can house up to 10,000 people, but officials are not sure how quickly flights will arrive.

"It certainly sounds like the first group are people who are just relieved to have been able to escape Afghanistan. They won the lottery, they’re here in America,"Johnson said. "I truly think the vast majority of the people who will be coming here... are here wanting what we want: freedom, the opportunity to raise their families in safety and security with opportunity."

But Johnson said he is concerned the Biden administration is not doing enough to screen individuals before they are evacuated to the U.S.

"There are people who are being transported that don't have any ID whatsoever," Johnson said. "I don't know the full extent because I think there is so much chaos. But it was a point that we were making with (Maj. Gen. Darrell Guthrie) and the State Department and Department of Homeland Security personnel here, is that puts an even greater burden on their shoulders to evaluate and vet and try to identify those individuals that they are going to be taking care of here."

White House officials have said individuals coming from Afghanistan are undergoing biometric and biographic screening to ensure their identity.

According to Johnson, a representative from the State Department said they are hoping to have people screened and ready to be relocated in 14 to 21 days after arriving at Fort McCoy. But he said he would like to see the emphasis put on proper screening instead of speed.

"We shouldn't rush the process. It's not worth taking the risk. So... for some people, it may be obvious, they may already have the special immigrant visas and that can happen pretty quickly. But for others, it might be quite some time," Johnson said.

He suggested that the administration should mobilize veterans from the war in Afghanistan to help them identify who aided U.S. troops as part of screening individuals.

State Sen. Patrick Testin, R-Stevens Point, said the refugees are staying in barracks at Fort McCoy and have two hot meals a day, with officials hoping to increase that service to three meals in the coming days.

Testin said the individuals are receiving a medical screening when they arrive and are being tested for COVID-19. Refugees will also be given the opportunity to receive a COVID-19 vaccine.

He said it’s unclear how many refugees will ultimately be resettled in Wisconsin, with charitable organizations helping with relocation efforts across the country. But he said it appears that only a small number will remain in the state.

Both Testin and Johnson praised military personnel leading the resettlement operation at Fort McCoy, both saying they had confidence in their work.

Gov. Tony Evers also visited Fort McCoy on Wednesday. The governor was briefed on operations by local military officials and met with Afghans staying at the base, according to a press release.

"Our allies from Afghanistan have a long road ahead of them, and Wisconsin will continue to extend our support and assistance to these individuals who bravely contributed to our country’s efforts over the past two decades," Evers said in the press release.

To help support the refugees, visit the Wisconsin Department of Children and Families "How Can I Help?" website at https://dcf.wisconsin.gov/refugee/help.