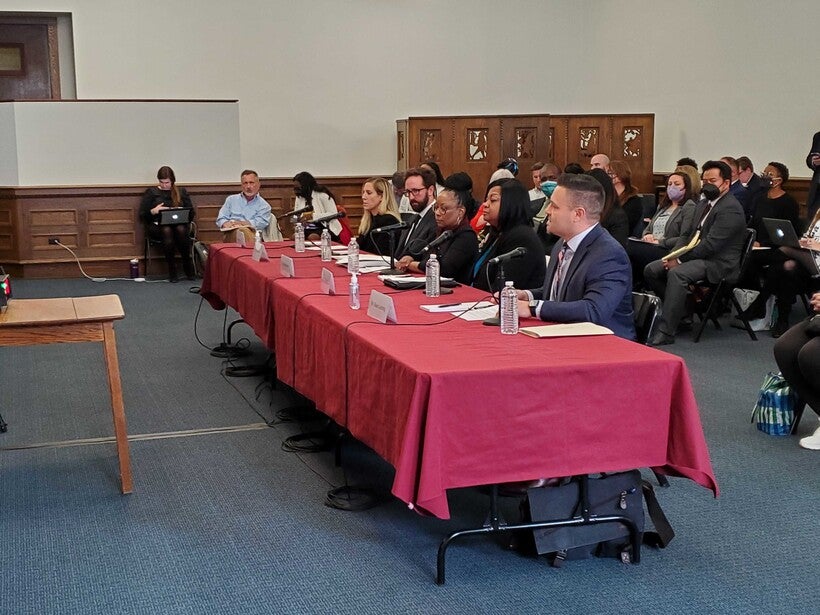 Shaun Luehring (right), president and CEO of the Lutheran LUMIN Schools in Wisconsin and Indiana, speaks before the U.S. House Select Committee on Economic Disparity and Fairness in Growth at Milwaukee's Centennial Hall on Tuesday, April 12, 2022. The committee was in Milwaukee to hear from community advocates about how inequities are impacting the area's residents. Christine Hatfield/WPR

US House committee comes to Milwaukee to investigate inequities in housing

Milwaukee activists shined a spotlight on the struggles some of the city's marginalized residents face in achieving homeownership when they met on Tuesday afternoon with a U.S. House of Representatives committee visiting the city and focusing on the topic.

Milwaukee continues to be one of the most segregated cities in the United States. Systemic racism has long been an issue as people in marginalized groups face barriers to homeownership such as lower appraisals.

Maricha Harris is the executive director of Milwaukee's Dominican Center in the city's Amani neighborhood. Speaking before the U.S. House Select Committee on Economic Disparity and Fairness in Growth, Harris said 55 percent of the area's residents are living below the poverty line, but it's been difficult for underserved residents to get federal funds for home repairs.

"The paperwork is extremely daunting and there are a lot of rules and regulations that disqualify residents," Harris said. "We're speaking about residents who need this assistance the most."

Sakuri Fears is a senior program officer with the Milwaukee office of the Local Initiatives Support Corporation. According to its website, the organization "forges resilient and inclusive communities of opportunity across America."

"Our ultimate goal is to ensure that everyone, regardless of zip code, is able to join the economic mainstream," Fears said in her testimony. "Without an adequate housing resource, our nation will not be able to dismantle the systemic barriers to racial equity."

Fears discussed several of the organization's programs, including a pre-development venture fund for emerging developers to undertake projects.

"This type of flexible funding is not readily available in the private market, and is particularly inaccessible to most emerging developers, including people of color," Fears said. "We know that there's a massive racial wealth gap in America, and it is particularly acute in Wisconsin. This is indeed why federal funding is needed for this type of fund."

The House committee has been in Wisconsin this week as part of its work. On Monday, it visited Kenosha. On Tuesday morning, members took a bus tour of Milwaukee.

"We saw firsthand the stains that racist policies have placed on our community and the impact that that has," said U.S. Rep. Bryan Steil, R-Wis., a ranking member on the committee. "What are the policies that we can put in place today to move ourselves forward so that everyone has a chance to be successful and live out the American dream?"

U.S. Rep Gwen Moore, D-Wis., represents Milwaukee in the U.S. Capitol. She said the committee's visit to the area is "a chance to think about solutions." She noted an estimate that 400,000 families in the state make less than $15 an hour, and that only 170,000 homes are available to that group.

"The gaping shortage represents a policy failure," Moore said. "It's a drag on our economy that deepens unjust disparities."

"Tenants' lives are frequently threatened by electrical fires, lead paint, and on top of that, renters often contend with predatory landlords who abuse the eviction system," Moore said. "And yes, Black renters are hit hardest."

U.S. Rep. Jim Himes, D-Conn., is the leader of the committee.

"We pass laws, but that doesn't mean anything until it actually gets into the community," Himes said. "Way too rarely do we federal officials get outside of Washington, other than into our own districts, to see what's working."

"If you just sit in Washington, you know, your head gets consumed with the political fight," Himes said.

The committee is hoping to have a report on its findings out toward the end of the year.

"I hope that the report is really honest about what we found, and that it focuses on the real systemic issues, and that we don't veer off into declarations about people's character," Moore said.