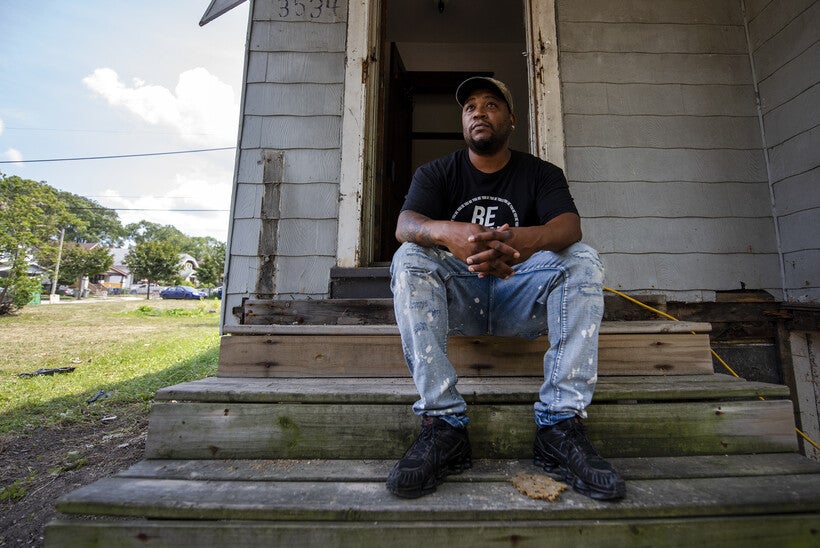 Reginald Reed sits on the steps of a home he’s remodeling in a Milwaukee neighborhood Thursday, Aug. 5, 2021. Angela Major/WPR

The state lags significantly behind the rest of the country in Black and Latino homeownership
By Diane Bezucha
Share:

While Milwaukee has long had a reputation as a racially segregated city with significant housing inequality, a new report from the Wisconsin Policy Forum shows that these disparities extend well beyond its borders.

"What we found basically is that the racial gaps in homeownership are even greater outside of Milwaukee than in Milwaukee," said Joe Peterangleo, the report’s author and a senior researcher with the Wisconsin Policy Forum. "It points to the need for statewide kind of efforts to address it."

Of the five cities, Milwaukee had the lowest racial gaps in homeownership. There, 55.8 percent of white households own their home compared to 37.5 percent of Hispanic households and 27 percent of Black households.

Green Bay was the only city in the study where the gap of 55.9 percentage points between white and Black homeowners exceeded the statewide average of 46.5 points.

And Wisconsin’s numbers are significantly worse than the rest of the country.

"The racial gaps in homeownership are greater in Wisconsin — by a lot — than they are nationally, and … they've deepened over the last decade," Peterangelo said.

In Wisconsin overall, the gap between Black and white homeownership averaged 46.5 points. Nationally, that number was 30 percentage points.

Since the housing market and financial crisis of 2007, homeownership has declined across all three racial groups, but the gaps between white homeowners and Black or Hispanic homeowners have widened.

One of the biggest factors is the increased cost of homes.

At the same time, the median income of non-Hispanic white households in Wisconsin was $64,927, compared to $46,266 for Hispanic households and $31,351 for Black households.

"What's unique about Madison is how expensive it is to buy a home there — just the median home value is higher there than in any of the other cities and statewide," Peterangelo said.

And the disparities in homeownership across Wisconsin mirror what advocates are seeing in homelessness.

"There’s a serious disparity in our homelessness systems," said Michael Basford, director of the state’s Interagency Council on Homelessness.

Eighty-three percent of Wisconsin residents are white, but they make up fewer than half of the population using homelessness services.

Basford said the disparities in homeownership and homelessness today are built on a long history of discriminatory housing and lending policies such as redlining and restrictive housing covenants that effectively segregated many cities along racial lines.

And because homeownership is a big part of building individual and family wealth, these disparities are widening existing economic inequality in the state. And decades of housing discrimination are taking a significant toll on the health of Black and brown communities.

The Interagency Council on Homelessness released an updated statewide action plan last week. Among the plan’s recommendations is a focus on equity and homeownership through more intentional data gathering, training programs and funding initiatives.

The Wisconsin Housing and Economic Development Authority is working to collect data through their emerging African American and Latino Homeownership Initiative. The information will be used to inform pilot programs for increasing Black and Hispanic homeownership.

But Peterangelo said there is still a lot to be learned from Milwaukee, which is home to a majority of the state’s Black residents.

"The scale of the issue is greater in Milwaukee. It also has perhaps the biggest opportunity to make an impact," Peterangelo said. "Improving conditions in Milwaukee can have a pretty big impact on statewide numbers."

One of Milwaukee’s most promising approaches so far is the Community Development Alliance’s housing plan and strategic acquisition fund.

"What we're seeing a lot in Milwaukee is that investors are coming in and purchasing large numbers of homes all at once and then making them rental units, so they’re investment opportunities," Peterangelo said. "That's eating away at the homeownership rate and taking away opportunities for homebuyers."

And this kind of "land-grab" is most common in Milwaukee’s Black and brown communities, so the fund is prioritizing home purchases in these areas to ensure that the homes are available to current residents.

The City of Milwaukee is also using American Rescue Plan Act funds to start a down payment assistance program.

Peterangelo added that he is working with a graduate student from the University of Wisconsin-Madison on a study that compares Milwaukee to cities of similar size and demographics across the country in the hopes of learning how they have addressed housing disparities. He hopes to have that new report ready by summer.