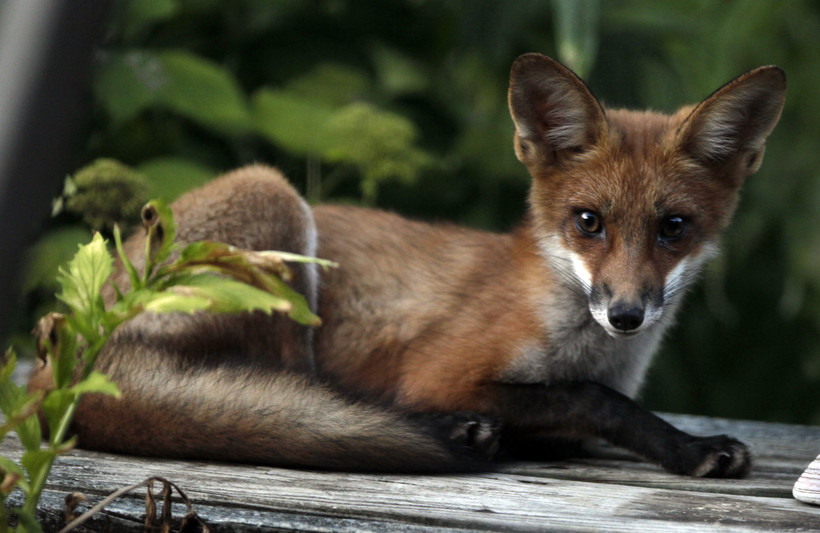 In this photo taken Sunday, July 11, 2010, a red fox looks up from its resting place on a backyard deck in Annapolis, Md. Carolyn Kaster/AP Photo

UW-Madison Wildlife Specialist Says Some Of The Change Is Our Own Observation
By Melissa Ingells
Share:

As many Wisconsinites work from home because of the coronavirus pandemic, many are noticing more wildlife in our city and suburban neighborhoods. Maybe a fox visits your yard regularly, or you observe more bird activity than usual.

To find out more about how wildlife is reacting to the enormous change in human habits, WPR’s Melissa Ingells talked to David Drake, a professor and wildlife specialist in the Department of Forest and Wildlife Ecology at the University of Wisconsin-Madison.

Ingells asked him if wildlife is actually moving into the city. His take: not exactly.

David Drake: We’re in one spot more frequently. We’re around our houses. And so now, all of a sudden, we have time to sit and look and see what’s going on around us, and I think that we’re starting to see things that have always been there. We’ve just been too busy to notice them.

But the other thing I think is happening is that animals that live in urbanized areas around human beings, they’re very plastic or flexible in their patterns. We do have animals that are active during the day, but we have a lot of animals that are active at night. And one of the reasons they’re active at night is that they are able to avoid human beings because there’s not as many of us out in the landscape. Now that there’s fewer of us on the landscape during the day, these animals are able to actually come out then because they are not interacting with us as much.

So I think it gives us the opportunity to see them a little bit more now, partly because you have daylight to see them, but also because they’re out at times that we’re typically up and awake and active.

Melissa Ingells: If animals are becoming more comfortable, for instance, next to a roadway, then what happens when everything goes back to normal?

DD: Well, in the urban areas, a lot of times the animals are pretty comfortable next to the roadways to begin with. And most of the animals living in the urban-type areas, it’s not uncommon for them to look both ways before they cross the road a lot of the time. They’re used to dealing with traffic, and a lot of times in those roadways, we have animals there either because, for example, deer might be browsing in the roadside vegetation or licking the salt that’s left over from the winter salting of the roads. We have a lot of birds that might be picking up grit to help digest the seeds in their gizzard.

It’s not uncommon for animals to cross roads, and they’re pretty good at it, generally speaking, but certainly a reduction in traffic should hopefully increase their survivability and decrease the amount of wildlife we see hit by cars during normal times.

Staying At Home May Boost More Interest In Nature

MI: Now that people are discovering these things, do you think there will be a change in the way they see nature going forward?

DD: Boy, I sure do hope so because it would be wonderful if people appreciated nature and had a better understanding about what’s around them, where they live and things like that.

I spend a lot of my career trying to get people to engage with (especially) urban wildlife, and understand what’s around them. But I think right now especially, you know, there’s so much anxiety over the COVID era, about the economy and the uncertainty about when this is going to end, and if you’re going to get sick or you’re not going to get sick, and things like that. And one of the things that really does bring great joy to people is being outside in nature and seeing wildlife.

I would really encourage people, even if you’re doing it from your house, take a few minutes and just watch what’s in your yard, be it a robin or a rabbit or a fox or maybe a hawk or owl or something like that. And when you see something like that, just take those moments and enjoy that happiness and the joy that maybe it brings you, and just get a bit of relief from the anxiety that’s hanging over all of us.