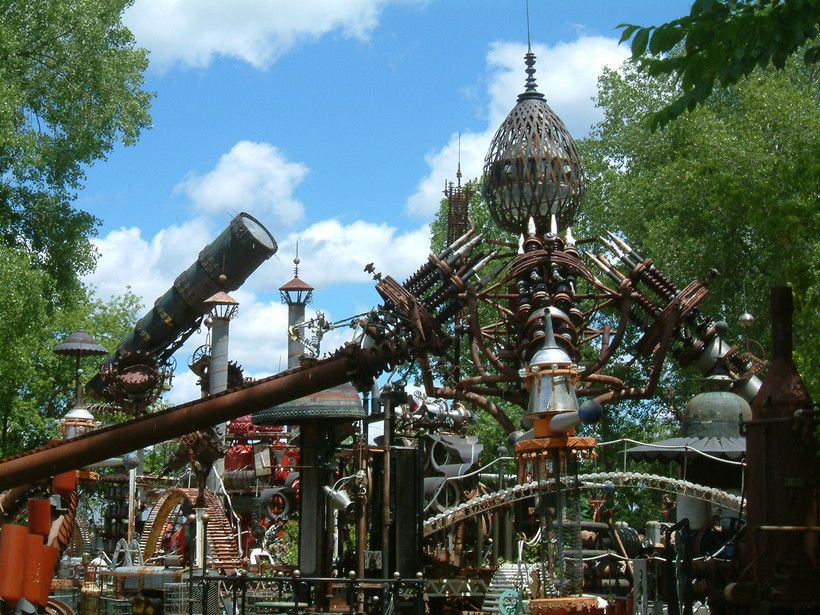 Unraveling The Curious Story Of 'Dr. Evermor' And His 'Forevertron' Sculpture

Sculpture Is Part Of Myth Created By Dr. Evermor, Also Known As Tom Every
By Chris Malina
Share:

Just off of Highway 12, between Baraboo and Sauk City, is a sprawling sculpture park unlike anything else on the planet. From 17-foot-tall metal birds made of salvaged musical instruments, to the mysterious beauty of the ‘Forevertron,’ the sculptures have been drawing visitors from all over the world for decades.

They’re the work of Tom Every, best known by the name he gave to himself, “Dr. Evermor.” He’s often described as something of an eccentric.

“Tom’s conversation flows smoothly between myth and reality and fiction and fact and the present and the future and intergalactic talk,” said Tom Kupsh, author of “A Mythic Obsession: The World of Dr. Evermor.”

Kupsh said Every’s obsession with scrap began early in life. As a child, Every started amassing odd bits of junk and salvaging things other people didn’t need. His mom eventually got fed up with all the junk around the yard, and asked him to find a place in town to put the stuff.

“By the time he was 14, he had collected enough scrap metal to fill a railroad car,” Kupsh said.

It was the beginning of what would become one of the largest collections of reused scrap metal in the world.

As an adult, Kupsh founded a demolition and salvage company, where he amassed a great amount of material: “He salvaged breweries, railroad cars, power plants, and industrial sites,” said Kupsh.

But Every found that some of the objects that he was finding were too precious to turn into salvage. Kupsh said Every came up with the idea that these objects were animated with the spirit of the person who had used them, or the person who had made them. He set those items aside.

In the 1970s, Every struck up a friendship and business partnership with Alex Jordan, the founder and creator of House on the Rock. After some time, however, the relationship fell apart, and it sent Every into depression.

“He felt that his world had ended,” Kupsh said. “So many things in his personal life and his professional life had come to an end.”

That’s where the story takes a unique turn: Kupsh said to deal with his sadness, Every came up with a family myth that involved a fictive ancestor named Dr. Evermor.

In the myth, the young Dr. Evermor and his father get caught in a terrible lightning storm. While taking shelter, Dr. Evermor asks his father where the lightning comes from, to which his father replies, “From almighty God.” Tom, who has taken on the role as Dr. Evermor, decides that if he can create a lightning force beam and get himself inside of it, he can rise to the celestial sphere.

“Tom took this myth, and he escaped from reality by building the Forevertron,” Kupsh said.

The Forevertron, a device unlike any other, is now Dr. Evermor’s most famous creation. Kupsh said it’s five-and-a-half stories tall and about 160 feet long, making it the largest scrap metal structure in the world. The structure is surmounted by a glass ball inside of a copper egg, surrounded by electric devices and charging machines — the idea being that the electric force beam that will cause the egg to blast off into the heavens, when ready.

Kupsh said the Forvertron is made up of many parts, and took years to build. There are thousands of other creations surrounding the massive sculpture — many inspired by the same myth — but nothing quite catches the eye like the Forevertron. The structure, said Kupsh, has been the inspiration for many other artists.

“Tom’s very much appreciates people coming out and telling him that they’re inspired by the work.” he said.

For anyone who hasn’t seen the sculpture, Kupsh said it’s something to see to believe.

“Words fail anyone in describing it,” he said. “There is no one who goes to the Forevertron and wanders around there who doesn’t scratch their head and marvel at this wonderful work of art.”