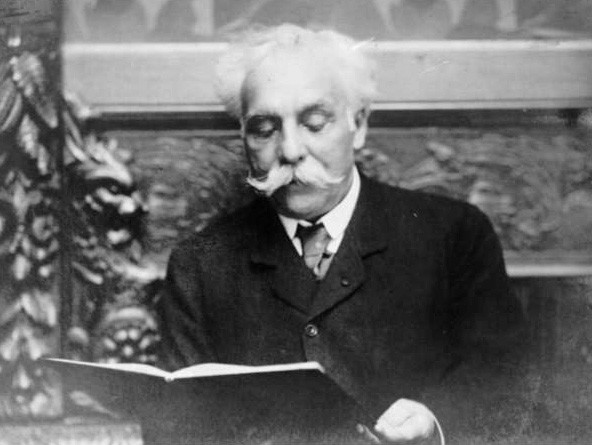 The Frenchman Gabriel Fauré was inclined to write refined, soft-spoken music.  In 1908 one of his staunchest supporters was a composer of outgoing, often dissonant pieces--the Spaniard Isaac Albéniz.

Fauré was born on May 12th, 1845.  He was fifteen years Albéniz' senior, but Albéniz had been a dazzling child prodigy and a freewheeling world traveler by the age of twelve.  At age sixty-three, Fauré was still having trouble getting recognition.

In 1908 Albéniz introduced Fauré into musical circles in Barcelona.  The next year Fauré was invited to conduct his Requiem, Shylock, and Caligula as well as his Ballade for Piano and Orchestra.  According to the pianist, Marguerite Long, during one rehearsal of the Ballade Fauré was conducting badly.  He was eagerly awaiting a telegram telling him whether or not he had been elected to membership in an important musical organization--the Instutut.

"All through the rehearsal Fauré kept looking at me," Marguite Long recalled, "not because of anything in the Ballade but out of desperation to know the result of the election. The rehearsal finished at midnight and still there was no word, so Fauré went off to find out what he could.  At the post office we discovered there was a postal strike and nothing was getting through.  Then, around dawn, just as we were all getting some much-needed sleep, Fauré banged on the door, waving the telegram.  He'd been elected!"

There had been some resistance to Fauré's election to the Institut, and it's likely that Albéniz used some of his powers of persuasion to Fauré's advantage.  By the time of the election, though, Albéniz was seriously ill.  He was staying in Paris, and Fauré and Paul Dukas went to see him often. On one occasion he paid Fauré the ultimate compliment when he asked Marguerite Long, as a last favor, to play one of his favorite piano pieces, the Second Valse-Caprice by Gabriel Fauré.