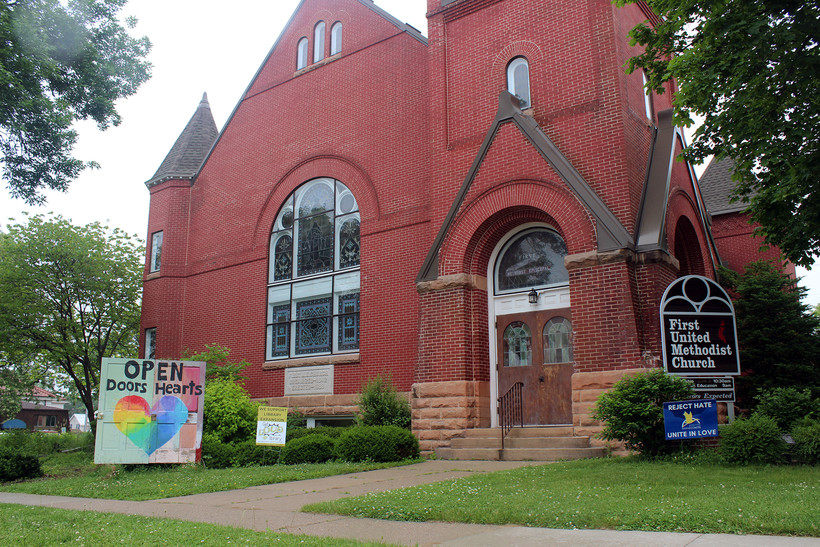 Baraboo First United Methodist Church sits on a busy corner in downtown Baraboo. Members placed a rainbow sign outside the church to show their support of the LBGTQ community. Bridgit Bowden/WPR

For United Methodists In Wisconsin, The Future Is Unclear

Denomination's Stricter Stance On Same-Sex Marriage May Cause Church To Split
By Bridgit Bowden
Share:

Earlier this year at a meeting of its General Conference, the global United Methodist Church voted to take a stricter, more traditionalist, stance against gay marriage and LGBTQ clergy. Now, there are rumblings that the decision might cause a split in the nation’s second-largest protestant denomination.

"It's a time of a lot of uncertainty, and, and grief too because I do believe that we're witnessing the ending of something," Cotter said.

Cotter didn’t grow up in the United Methodist Church. She was drawn to the denomination in her 20s because of an atmosphere she describes as "generous" and "open-minded." Her church in Baraboo is a reconciling congregation, which means it supports same-sex marriage and LGBTQ clergy. Earlier this year, they placed a large display outside the church, a rainbow heart painted on a pair of doors that says "Open Doors, Open Hearts." It's a way of showing the whole town that all are welcome at the church, Cotter said. 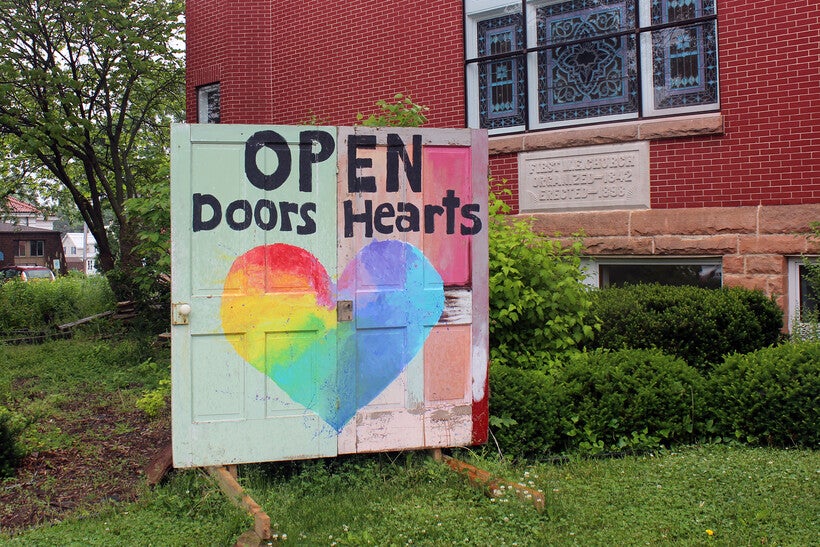 Members of Baraboo First United Methodist Church placed an art display that reads "Open Door, Open Hearts," outside the church to show the town that members of the LGBTQ community are welcome. Bridgit Bowden/WPR

The General Conference's traditionalist stance has been a difficult one for Cotter to come to terms with.

"The great sense of sadness that came after that General Conference was the church that I joined really does not exist anymore," she said.

In February, delegates from all over the world reaffirmed the church’s conservative traditionalist stance, which has existed on the books for decades. Starting in January 2020, clergy who perform same-sex weddings will face harsher penalties that could include removal from the ministry.

The vote came after the "One Church Plan," a proposal to allow churches to take their own stance on the issue while remaining one United Methodist Church, was rejected. Many of the votes for the traditionalist plan came from outside of the United States, where the church has a growing presence.

Keri Olson is a life-long member of Cotter’s church, and now she serves as its administrative council chair. She said the controversy has been painful for United Methodists, but also a blessing in disguise.

"It also is probably one of the best things that would have happened, strangely, because I think it makes us have to identify the issue in the room," she said.

She believes a split is likely, and maybe for the best, because she worries membership will suffer under the church’s conservative plan.

"If they are only looking at the bottom financial line, they are going to see that it is unsustainable to keep marginalizing groups of people and taking stances that are so punitive and severe, that as a young person I would question whether or not I want to be part of a denomination that is so exclusive," she said.

But Mark Tooley, president of the American Christian conservative think tank Institute on Religion and Democracy, thinks membership would actually suffer if same-sex marriage were allowed. Tooley supports the traditionalist plan, because he believes its restriction on same-sex marriage aligns with what the Bible teaches.

He thinks there’s a growing consensus that a formal division might be necessary, but recognizes that a split would be difficult for local churches.

"It's unusual to find a local church that's purely liberal or purely conservative," he said. 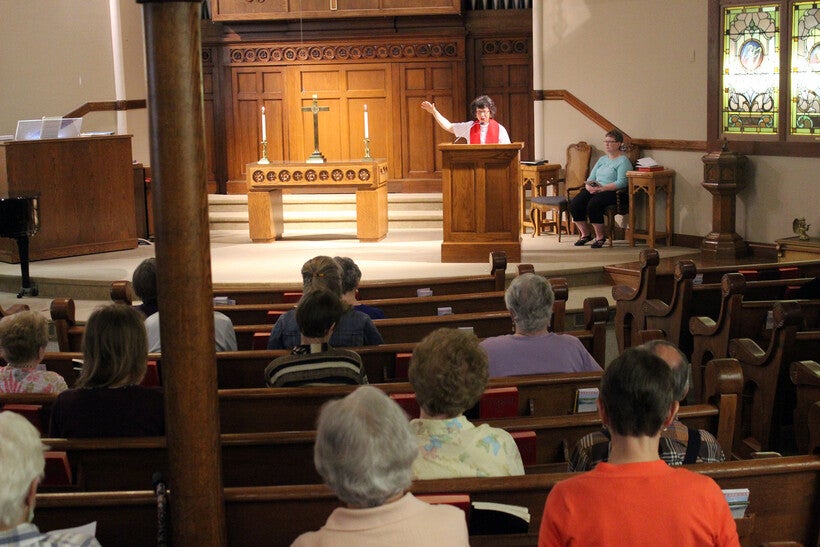 Despite the General Conference's decision, some are advocating to keep the unity in the United Methodist Church. Wisconsin’s Bishop Hee-Soo Jung is pushing to form what he calls a "Wisconsin Option" that is neither conservative nor liberal. Jung, who personally believes the church should allow same-sex marriage and ordination of LGBTQ clergy, supported the rejected One Church Plan, which would have allowed different perspectives to remain under the same umbrella.

But for Pastor Amy DeLong of River Falls, the issue has come to a breaking point.

"The bishops have done too much to try to hold together some kind of unity, but that always, always, always comes on the backs of queer people," she said.

DeLong, who is openly gay, was put on trial by the church in 2011 for her sexuality and for officiating a same-sex wedding.

Now, her congregation has made it clear that it will not be in a United Methodist Church under the traditionalist plan. But DeLong is urging her congregation to be patient, as the future of the denomination may become more clear next year when the General Conference is scheduled to meet next.

"It feels like there's a whole lot of things being talked about and not a whole lot being done, but I do think we are at a breaking point," she said. "I think it will take a while for the dust to settle and for folks to figure out where they're going to land."

The Wisconsin Annual Conference of United Methodists will meet in Green Bay on June 14-17. On the agenda are several items that if passed, would formally reject the traditionalist plan.

But until it becomes more clear what will happen with the denomination as a whole, United Methodists in Wisconsin will continue to wait and see.