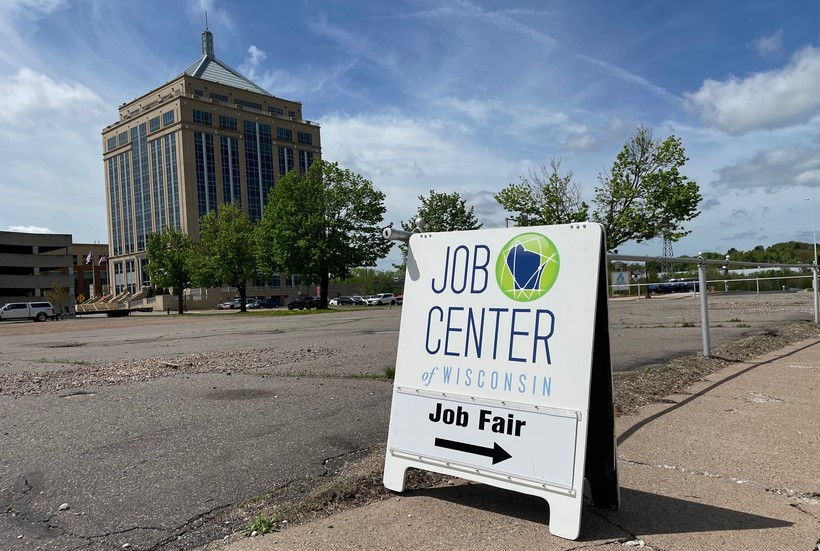 A sign advertises a job fair in Wausau, May 19, 2022. New data from the state show Wisconsin's unemployment rate remained at a historic low in April. Rob Mentzer/WPR

Unemployment in Wisconsin is at a historic low, labor force is growing

Wisconsin's unemployment rate is the lowest it has ever been.

New data from the state Department of Workforce Development for April show that for the second month in a row, the state's unemployment rate was 2.8 percent, a historic low.

Just over 3 million people are working in Wisconsin, DWD chief economist Dennis Winters said in a briefing Thursday, and the labor force expanded by 2,700 last month. That's significant as employers in many sectors struggle to hire. Like the unemployment rate, the state's labor force participation rate was unchanged from March. At 66.5 percent, Wisconsin's share of people working exceeds the national labor force participation rate by 4.3 percentage points.

Economists measure unemployment based on how many people are actively seeking work, which means those who have retired or aren't looking for work for other reasons are not counted as unemployed.

The state has about 98 percent as many jobs as it did before the pandemic plunged it into recession in early 2020, and even hard-hit sectors including hospitality are at 95 percent or more of their pre-COVID-19 employment levels. But only construction has added jobs since 2020, Winters said.

"We know the housing market is booming, especially multi-family housing," Winters said. "All the construction folks we talk to, they're just crying for workers."

Despite the low number of people looking for jobs, public opinion polls have shown most Americans have little confidence in the economy, and the reason they give is concern over high inflation. Inflation rates grew at a record-setting pace earlier this year, and remained high in April. That means rising prices on many household goods, but it also is helping to drive up wages.

Data released Thursday are preliminary and seasonally adjusted. Last month, the U.S. Bureau of Labor Statistics released data showing that late last year, wages were rising in all 72 counties in Wisconsin — but only in the state's six largest counties were wages growing faster than the national average.

In general, wage increases in recent months have been subsumed by inflation, Winters said. But they could still be a long-term benefit to workers.

"We expect inflation to be temporary," he said. "We assume the wage increases will be permanent."

Wage increases may be having another effect on workers: They're permitting some to forgo a part-time evening job.