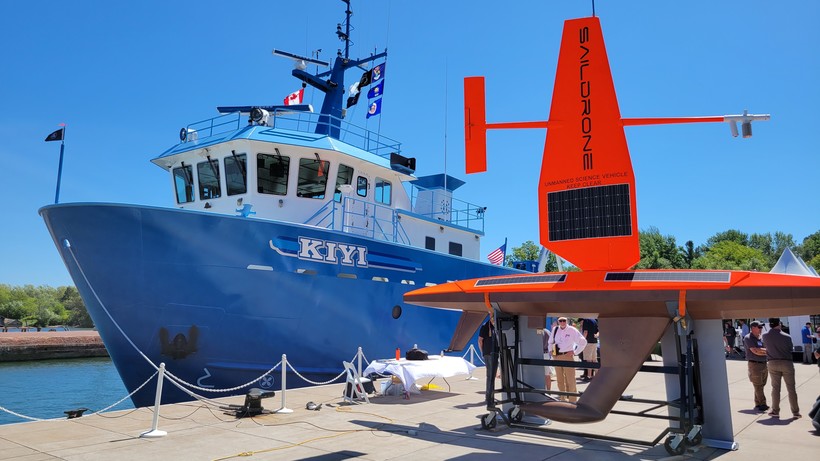 A sail drone stands on a dock next to the U.S. Geological Survey research vessel Kiyi. Photo courtesy of Andrea Miehls and the USGS

Two uncrewed, drone-operated sailboats are quietly collecting data from Lake Superior to study the accuracy of fish abundancy estimates in the Great Lakes.

Data from the silent sail drones will compare to louder vessels that could be scaring some fish away — potentially leading to an undercount, said Peter Esselman, a research fishery biologist from the U.S. Geological Survey.

"Data really is what drives our work, and it's what drives the best decision-making," he said recently on Wisconsin Public Radio’s "The Morning Show." "So, that's really what we're pushing for here, and that's why we're adopting these new technologies."

The large orange sail drones covered with solar panels launched from Ashland near the Apostle Islands on Aug. 9 and will collect data through the first week of September. Esselman said they will have covered the Minnesotan and Canadian portions of Lake Superior before returning to Ashland.

Someone at a base station in California monitors the boats’ progress while issuing routes and commands to them, he said. Esselman himself is based out of the USGS Great Lakes Science Center in Ann Arbor, Michigan, serving as the primary investigator for a three-year study on fish populations in the Great Lakes.

The Great Lake’s commercial, recreational and tribal fisheries generate $7 billion annually and support more than 75,000 jobs, according to the Great Lakes Fishery Commission. Local officials make decisions each year on quotas, such as catch limits. Esselman said the USGS is the longest-running organization that shares data for officials to make those decisions.

"The quality of the data that we provide to the lake managers essentially affects the quality of their decisions they can make downstream," he said. "So, if our estimates are low, it’s possible that the quotes they set will be low."

Research that largely has been done in ocean environments suggests that fish avoid noise from large research vessels in the upper part of the water column, Esselman said. They tend to go away and down from the noise.

Another potential gap in fish abundancy estimates comes from fish that are near the surface of the water, and Esselman said research has suggested these fish can be undercounted. He said some echo sounders are about 15 feet into the water, leaving room for error.

"We just completed a two-week mission with one of those, and that autonomous underwater vehicle is now moving to Lake Michigan," he said.

An example of this data in action: Esselman said the Lake Superior Committee sets quotas for the harvest of lake herring. There’s a similar effort for lake trout harvest that he said has limits through the state Department of Natural Resources.

He said officials are balancing needs in conservation and for local economies.

"My observation is that the lake committees that are setting these targets are considering the long-term sustainability of the fishery, not so much just maximizing profit," he said. "Of course, there’s always pressure to allow more fishing and higher quotas, but my observation is that sustainability is a central concept to what the managers are doing with the data we provide them." 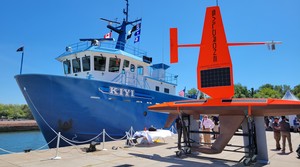 Two large, orange sailboats started plying the waters of Lake Superior around the Apostle Islands last week. Fish researchers are using the solar- and wind-powered vessels and autonomous underwater vehicles in a three-year study of the Great Lakes fishery. We talk to the primary researcher.