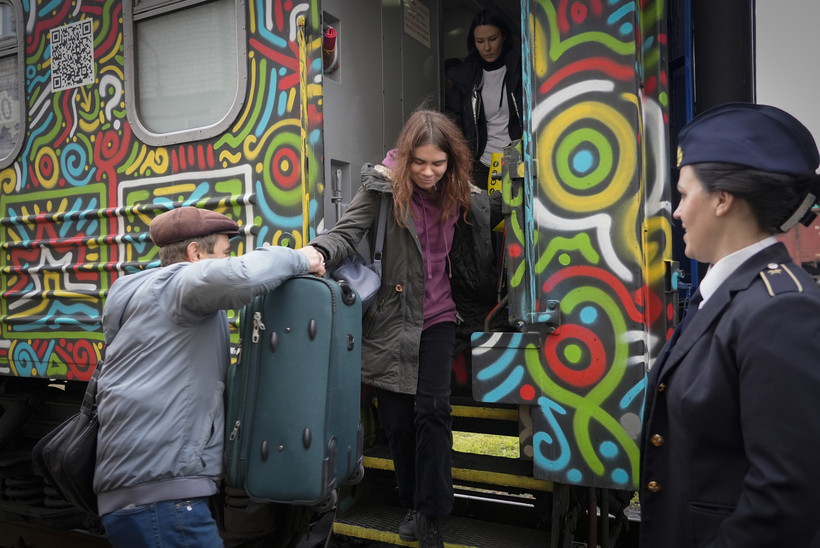 Passengers unload with luggage as they arrive on the first train from the capital Kyiv, after the Russian troops withdrew from the city of Kherson, Ukraine, Saturday, Nov. 19, 2022. AP Photo/Sam Mednick

Refugees are making their way to the state though private sponsorships and small organizations
By John Davis
Share:

Tatyana Lukash said her life was turned upside down in February when Russia invaded Kharkiv, the second-largest city in Ukraine and home to Lukash, her husband and teenage son.

"We had a decent life. We had everything we needed. We are alive and God brings us here (to Wisconsin). We will try," she said.

Lukash and her 15-year-old son went to Poland in March, and she spent months looking for a more stable living situation.

Her 45-year-old husband, a now unemployed welder, had to stay behind in Ukraine because he's still eligible to be drafted into the Ukrainian military.

Lukash connected on Facebook with Gary Coryell and his wife, who live on a hobby farm in northern La Crosse County.

The Lukashes are the second Ukrainian family Coryell has sponsored. A mother and daughter lived with them for about six weeks this summer before moving to Texas for work before Lukash and her son moved in with them in mid-October.

"Bringing these people into our home has given me a passion and a purpose that I haven’t felt in many years," Coryell said. "These people are in harms way, especially the mothers and the children. Open your homes and your hearts, and you won’t regret it."

Coryell has been using the federal government’s United for Ukraine program that was established in late April as a way for Ukrainian refugees to live in the United States under a sponsor.

Sponsors help refugees fill out paperwork proving they have some form of financial support. The federal government then does a background check on the refugees.

Coryell said they paid for plane tickets to bring Lukash and her son to the U.S. They've also provided them with a place to live, food, clothing, transportation and help applying for government services like food stamps. They also helped enroll her son in school.

Coryell said his family has relied on friends to help provide the support.

It's hard to quantify just how many Ukraine resident have resettled in Wisconsin since February. The U.S State Department didn't respond to a request from Wisconsin Public Radio asking for a head count of the number of refugees who have been sponsored to come to the state. A CBS news report in September said Wisconsin wasn’t among the top 10 destination states for Ukrainian refugees.

Refugees can be sponsored in multiple ways: privately, like Coryell's family has, or through organizations known as Welcome Circles.

The La Crosse Welcome Circle, or LWC, brought its first two families to Wisconsin from Ukraine in early November.

LWC member Rabbi Brian Serle said there are similar programs to sponsor Ukrainian refugees in the Milwaukee, Madison, Eau Claire and Fox Valley areas. The organization's goal is to help resettle about a dozen Ukrainian families.

Lukash has worked as a translator for most of her life. While she feels safe living in rural Wisconsin, she said she won’t feel complete until she’s reunited with her husband. She said communication is difficult now because of power outages in Ukraine.

Lukash would like to find a way to start over in America since it could be years before war-torn Ukraine is rebuilt. The Biden administration has given Ukrainian refugees a two-year stay in the U.S., but whether time beyond that will be granted remains to be seen.

"I would want to become independent as soon as possible. It could be as a translator, or I would like to work in human services to help other people," Lukash said. "I love my country. I love my people, but here everything works. It's different in many other places. I appreciate a lot what I've been given here."