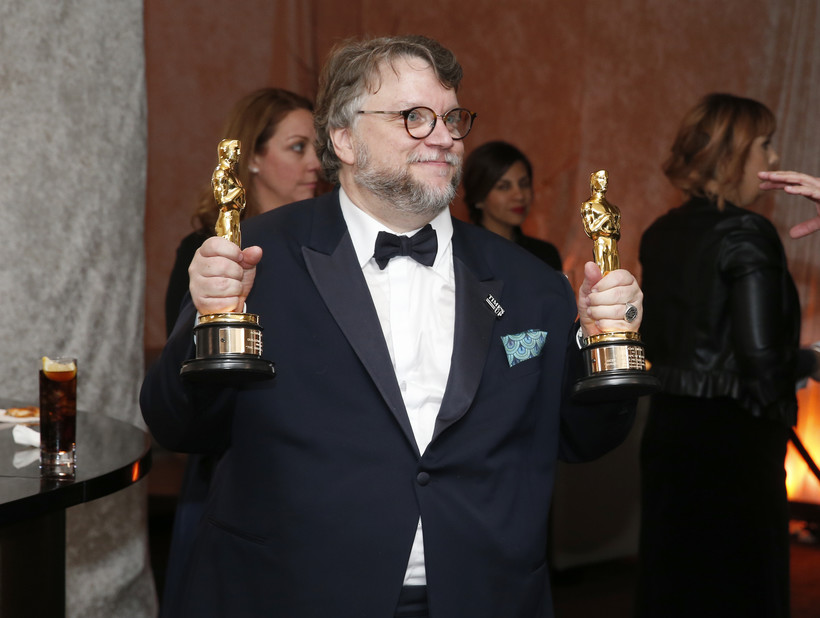 Guillermo del Toro poses with his awards for best director and best picture for "The Shape of Water" at the Governors Ball after the Oscars on Sunday, March 4, 2018, at the Dolby Theatre in Los Angeles. Eric Jamison/AP Photo

Ian Nathan makes the case that del Toro is one of the most innovative film directors working today
By Doug Gordon
Share:

If you're looking for magical, fantastical films that are unlike other movies, you should check out Guillermo del Toro's work. He's responsible for some of the most charismatic characters in modern cinema. Del Toro's resume includes Academy Award-winning films "Pan's Labyrinth" and "The Shape of Water."

Ian Nathan is one of the United Kingdom's best-known film writers. In his latest book, "Guillermo del Toro: The Iconic Filmmaker and his Work," he explores del Toro's life and his films. Nathan makes a convincing case that del Toro is one of the most imaginative and innovative film directors working today.

"He's got such an extraordinary mind, a capacity for detail and a tendency for detail that you ask him one thing, and he'll answer 20 different things," Nathan told WPR's "BETA."

Nathan said that every film del Toro has ever made is built up from a sort of cornucopia of other films, books and comic books.

"I think what you have is the two sides of del Toro's muse," Nathan explained.

The way Nathan sees it, the Hitchcock side is del Toro as the trickster who plays with plot and suspense and loves to frighten his audience. del Toro is also fascinated with human psychology, corruption, and where murder comes from, the dark side of things.

On the other side of del Toro's muse is Buñuel.

"He's much more thematic," Nathan said. "He's full of politics and religion, but religion is a very big part of del Toro's life and his art. He calls himself a lapsed Catholic, an atheist, but that still goes on in his head, that relationship with the past."

While del Toro was writing the screenplay for his third film, "The Devil's Backbone," he experienced the biggest crisis of his life — the kidnapping of his father in 1997.

Federico del Toro Torres was abducted in Guadalajara, Mexico. He was held hostage for 72 days. del Toro's fellow filmmaker James Cameron paid for the professional hostage negotiator who was hired to help del Toro. The entire ransom fee of half million dollars was made up entirely of five-dollar bills and one-dollar-bills because that is all that the Guadalajara bank had in its vault.

"(Guillermo) tells of having to drop the money off and all these mistakes that were made," Nathan said.

"And the directions were wrong and the drivers wouldn't go to places. If it wasn't so horribly real, it would be comical," he continued. "But that idea and that story, I think it stayed with him and is fed into his work. Fathers and sons, it's a big theme that continues throughout his films. And I think he was profoundly changed by that experience."

Del Toro married the concept of a fairy tale with a fantastic depiction of fascism at work in "Pan's Labyrinth," Nathan said. The film begins in 1944, five years after General Franco's victory in the Spanish Civil War has torn Spain apart. Eleven-year-old Ofelia (played by Ivana Baquero) is traveling to live with her pregnant mother in an old mill. Ofelia has to deal with her cruel stepfather, Captain Vidal (played by Sergi López).

"This came from a very personal place," Nathan said, "and even though he's Mexican, Spain has this very intimate connection with Mexico for historical reasons. So he's very connected to Spain."

"It's a beautifully expressive film, very sensitively done relationship between the two mothers and the one girl — her literal mother and the housekeeper who becomes her surrogate mother."

As Nathan writes in his book, del Toro wanted to make 'Pan's Labyrinth' because facism is definitely a male concern and a boy's game so he wanted to oppose that with an eleven-year-old girl's universe.

"He doesn't stick to one thing. His films seem to be one thing and then the more you watch them, they become other things because he's got all these levels. You unpeel them like an onion. There's another film underneath," Nathan told "BETA."

"The Shape of Water" is del Toro's tribute to the 1954 monster horror movie, "Creature from the Black Lagoon." It tells the story of a mute janitor named Elisa Esposito (played by Sally Hawkins) who works at a military research lab in Baltimore. Elisa falls in love with an amphibious humanoid who has been removed from his home in the Amazon and is the subject of cruel experiments.

"He was inverting a monster movie into a romance," Nathan explained. "He's always doing everything back to front. But he was doing a film within that about bringing people together, about inclusion. He was sort of attacking Trump's universe at the time by saying, 'Actually, look, you know, people can fall in love across species.' It's about coming together.

And then there is the Michael Shannon character (Colonel Richard Strickland) who is a corrupted, separating force," Nathan said. "He's the fascist within this universe."

Del Toro always operates on this metaphorical level for every creature, for every fantastical element, Nathan said.

"(Del Toro) says, 'I love monsters and I want to do monsters.' But he builds meaning into that presence. He won't let them just be a ghoul within his story, and he wants them to have this resonance. And I think he wants us to see ourselves in these creatures."

Guillermo del Toro's next film, coming this December, is "Nightmare Alley." It marks a bit of a departure because it is a film noir based on a previous film version made in 1947  and a 1946 novel by WIlliam Lindsay Gresham.

"A lot of it's about carnies in the 1930s, about con men and about the crazy array of creatures and people that come with a traveling carnival," Nathan said. "There's a very famous film called 'Freaks' from the 1930s, which was banned at the time because they used real people with disabilities, who were thought of at the time as circus freaks. And he's very influenced by that. So I think he's really going to lean in to the carnival element of it."

All the chapters in Gresham's novel relate to different cards so the ideas of destiny and prophecy loom large over the story, Nathan said.

"Del Toro's mother was a tarot reader, and she fully believed in it, and she taught him how to use the decks of tarot. So I think it's going to be a film noir thriller about a con man whose con turns on him. But at the same time, I think it's going to be filled with a lot of those familiar del Toro forces," Nathan said. "You know, magic will run just beneath the surface."